What’s your favourite meal of the day? Does this change when you’re touring? Ours is definitely breakfast. Nothing beats a full English cooked on the barbecue or fresh local eggs from the campsite shop.

We are early birds rather than night owls, especially as Terry is a landscape photographer and often up well before dawn to get the best opportunities to take pictures in perfect light.

This weekend wasn’t supposed to major on breakfast, but it turned out that way.

We left our home in Devon very early on a Friday to explore Dorset’s World Heritage Jurassic Coast.

We realised that we weren’t going to see everything in a weekend (the Jurassic coastline is 96 miles long) so focused on three places we really wanted to visit: West Bay (the setting for ITV’s drama, Broadchurch), the famous ruins of Corfe Castle (with over 1,000 years of history) and Swanage Railway (just right for a nostalgic and relaxing steam train ride through the wonderful Purbeck countryside).

West Bay has a large car park right on East Beach (next to The West Bay Hotel). The iconic golden cliffs are a stone’s throw away, as is the Watch House Café, location of our first memorable breakfast enjoyed on a gloriously sunny outdoor terrace.

A walk along East Beach looking for fossils was a must (the coastline covers 185 million years of geological history) and making the steep climb to the top of East Cliff was well worth the effort. The views are spectacular. For keen walkers, the South West Coast Path runs through West Bay, offering popular walks to Burton Bradstock in the east and Golden Cap – the highest point on the Jurassic Coast – to the west.

Treasure hunters who don’t find any fossils on the beach should visit The Customs House, a vast emporium of over 100 traders offering collectables, vintage, unique gifts and memorabilia. The West Bay Discovery Centre, set in a small Methodist chapel, is a hands-on museum that’s great for kids (free admission although donations welcome).

The following morning, to compensate for waking me up before dawn to take photos, Terry treated me to another memorable breakfast at one of the beach hut cafés set around West Bay’s harbour. We enjoyed our meal whilst watching boats coming and going from the harbour.

A whistlestop tour of the lively market town of Bridport, just two miles from West Bay, followed. The town grew up as a centre for rope making and there is a good free museum and Palmers Brewery, which offers regular guided tours.

Before leaving Bridport, we stopped for supplies at Morrisons supermarket, conveniently located close to the A35. Setting off towards the Isle of Purbeck and Corfe Castle we wished we had more time to visit some of the other places along the way.

Arriving in Corfe on the A351 from Wareham you cannot help but be impressed with the spectacular view of the castle (National Trust). It dominates the landscape and, whilst it is now a ruin, its former grandeur is clear for all to see. 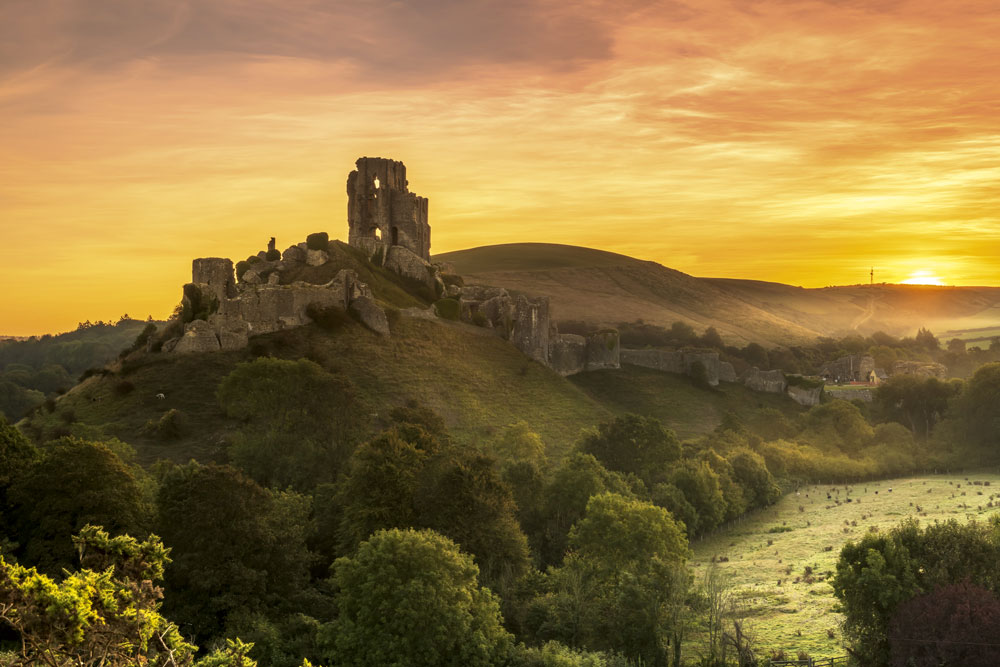 We had chosen to stay two nights at the Camping and Caravanning Club’s Corfe Castle site as it is just a 20-minute walk from the castle along the historic Purbeck Way. The site is nicely landscaped and its quiet location promised a peaceful night’s sleep – or so we thought!

We decided to pitch under the shade of a large tree and kept hearing large taps on our roof. Was it raining? Yes, but not water. It was ‘raining’ acorns. We swiftly moved so that I could get my sleep. Another lesson learnt.

Heading to the castle we spent the afternoon learning about its history, how it was built by William the Conqueror in the eleventh century and was one of the earliest castles in England to be made from stone rather than earth and timber. Remaining in royal hands until Elizabeth I sold it in 1572, this striking castle played a prominent role in the English Civil War.

I couldn’t help but marvel at the bravery of Lady Mary Bankes, wife of the then owner Sir John Bankes, who was away fighting with Charles I. She defended the castle against Parliamentarian forces in 1643. One of the last royalist strongholds to fall, Mary was eventually betrayed by her own staff and the castle was captured and destroyed by Parliamentarians in 1645-6.

Possibly the best view of the castle is from East Hill. It’s a steep climb, but we were rewarded with a bird’s-eye view of both the castle and the village.

The Isle of Purbeck was a favourite of children’s author, Enid Blyton, who first visited the area in 1931 and regularly returned for holidays. Corfe Castle was, apparently, her inspiration for the Famous Five’s Kirrin Castle and it isn’t hard to picture Anne, Julian, Dick, George and Timmy the dog arriving for their holidays on the Swanage Railway steam train that stops at Corfe station.

The following day we, too, followed in the footsteps of the Famous Five. After breakfast, cooked this time in the caravan, we took the by now familiar walk into Corfe, stopping to admire Boar Mill and the more than 150 different varieties of gin (yes, really) sold in the village stores.

Run by over 500 volunteers, the Swanage Railway was a 45-year project by the local community to restore railway services between Wareham and Swanage. Finally realised in 2017, Corfe station features a fascinating museum and cinema carriage and the six-mile route is spectacular.

We travelled on a return trip to Swanage, stopping in the town for a walk along the seafront to the restored Victorian pier, built in 1861 as a landing stage for a steam ferry service and to transport the prized Purbeck stone extracted from local quarries.

With limited time, we returned to the station for a coffee at the Birds Nest Buffet in a converted railway carriage and to visit the impressive station shop crammed full of memorabilia before boarding the train. Although I am not a railway enthusiast, I thoroughly enjoyed this nostalgic journey.

We watched the engine take on more water before setting off from Swanage and we reminisced about the old-style carriages and marvelled at the tenacity of the local volunteers in realising their restoration dream. The train was packed and the atmosphere upbeat. What is it about steam trains that makes people smile?

Staying at the Corfe Castle campsite for a second night gave Terry the welcome opportunity for both sunset and sunrise pictures of the castle.

And then it was only Poole, which was an unexpected surprise for us. A popular tourist resort, the town has a large natural harbour, a commercial port with cross-Channel ferry services and several excellent beaches.

We walked around Poole Quay, home to a Grade II listed Customs House that is now a café/restaurant and the old Town Cellars, repurposed as an interesting history centre.

On the quay is a large metal sculpture called Sea Music, designed by Sir Anthony Caro, that you can walk up to enjoy from different heights. There is also a bronze to commemorate Robert Baden-Powell’s creation of the scout movement on nearby Brownsea Island in 1907.

Across the quay you cannot miss the Sunseeker shipyard with its impressive range of luxury motor yachts that only the very rich can afford. Although, there is nothing stopping the rest of us from dreaming, is there? 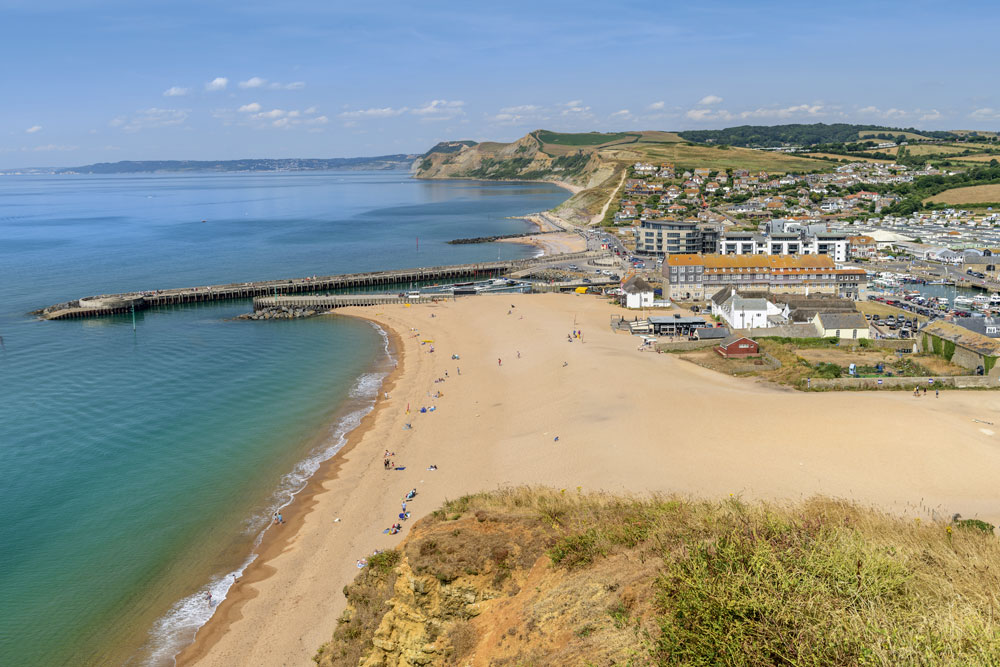 Our next activity was a boat tour of the harbour. The 70-minute trip took us past Brownsea Island, a wildlife haven that used to host the Baden-Powells’ scout and guide camps.

Brownsea Island was also the inspiration for Enid Blyton’s Whispering Island in Five Have a Mystery to Solve.

Now owned by the National Trust, the island is home stunning wildlife including red squirrels, sika deer and an abundance of migrating birds so make sure you pack your binoculars!

Further into the trip, we saw Sandbanks – dubbed Britain’s ‘Palm Beach’ as it has the fourth highest land values by area in the world – as well as the Sandbanks Ferry, a chain ferry which links the spit of land to Shell Bay in Studland. We came close to the vast Condor car ferry on its daily trip to Guernsey and to a lifeboat training session (the RNLI has its headquarters in the town).

Sadly, we only had time for a hurried lunch before setting off. But we vowed to come back to Dorset to see more of the sights – and to plan even more adventures over a decent breakfast!

Where to stay in Dorset

West Bay Holiday Park is close to the beach and ideally placed for fossil-hunting.

Base yourself here and you can walk into the town for a bite to eat in the evenings.

Discover the very best of Dorset

Poole’s natural harbour is the largest in Europe