Advice: How to carry cycles on your caravan 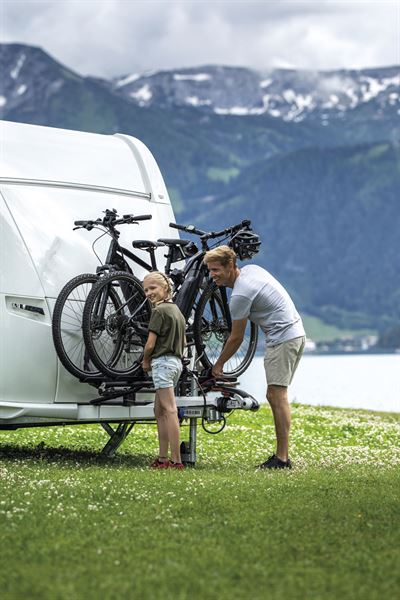 One of the great pleasures when you’re away in your caravan is exploring the surrounding area.

You can do this in the car, of course, or on foot, but for many, particularly after lockdown, or for families, going out on bikes is a firm favourite.

There are several ways of carrying your bikes with you and your caravan.

Here we will look at the most common methods and consider their pros and cons to allow you to make your own decision. 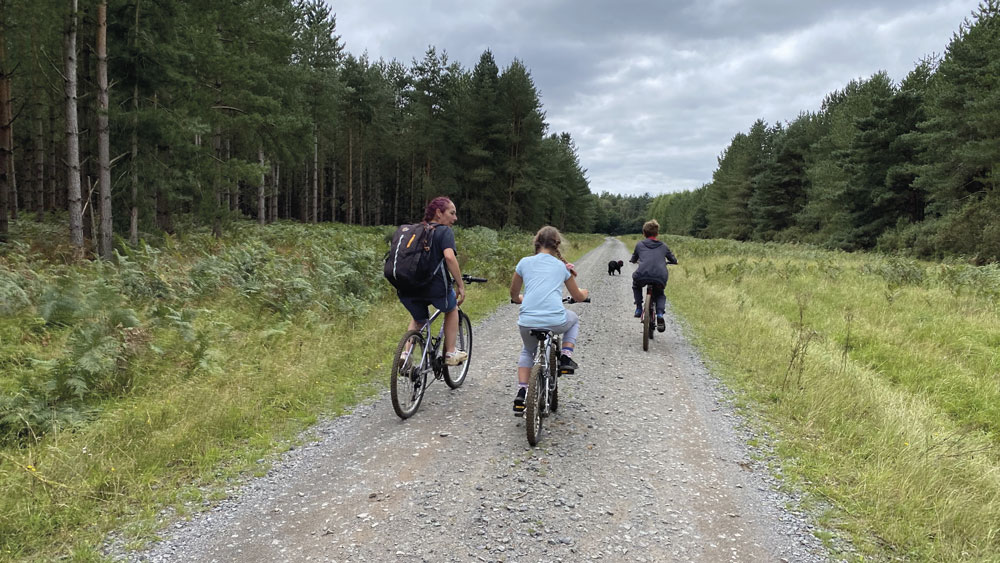 Before you do anything, you need to consider that a bike can be a heavy thing – my own Muddy Fox mountain bike, for example, weighs in at 17kg and, as a family, we currently use three adult mountain bikes and one child’s.

So that could easily add up to 60kg that needs to be accommodated somewhere that it won’t affect the handling of the caravan or its stability.

Alternatively, the new breed of electric – or E – bikes weigh even more, starting from around 25kg each, so a couple of these could easily add up to three conventional bikes.

You also need to consider security. That 17kg Muddy Fox was not expensive – that’s why it’s heavy and, on occasion, hard going. However, you can get lighter bikes but the price goes up.

So while we carry around perhaps £200-worth of metal and rubber, it’s not difficult to spend several thousands of pounds on one bike if you’re serious, so where and how you carry it and how to look after it may also be a consideration.

Another factor in a similar manner is how your bikes could be affected by weather en route. A sunny A-road route will have little effect but a sustained motorway blast through torrential rain or an off-road foray to a secluded campsite can leave your bikes wet or filthy and needing a clean at least before you go for a ride.

For many, a rack on the A-frame of the caravan’s chassis is the ideal solution. However, the caravan does need a relatively long frame to accommodate a reasonable number of bikes – generally three is the maximum.

Locating the bikes here will keep the weight within the rear axle of the tow vehicle and the caravan’s axles and many racks tilt to allow access to the front locker for pitching up, for example.

The interior of the caravan is also still accessible for stops or over nighters, while keeping the mounting height relatively low means loading the bikes is about the easiest of all the options.

However, the issue here again is weight but in a different way. Mounting bikes on the front of the chassis will inevitably affect the noseweight of the caravan and, in our case, those three adult bikes totalling perhaps 50kg (or a couple of electric bikes, for example) mean that when loaded, the contents of the caravan will probably need relocating to make sure the noseweight doesn’t become too high.

This could mean gas bottles, the spare wheel or the leisure battery could all need relocating while carrying bikes.

However, of course, without the bikes, the noseweight would potentially need to be increased again to ensure outfit stability.

They can also mean that clearance between the car and caravan is compromised – not necessarily an issue when travelling on major roads but it can limit the turning circle of the outfit, particularly when reversing. 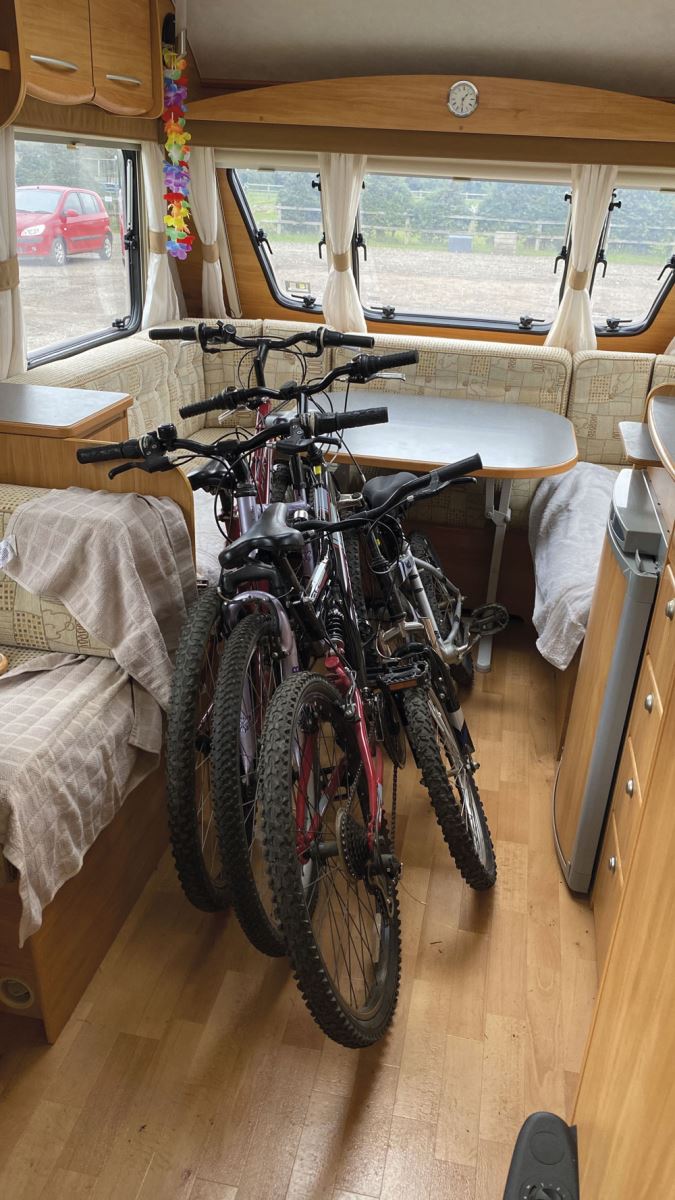 Arguably, directly over the axle(s) is the best place for any object of weight (awning poles, etc) so that it has the minimum effect on the stability and handling of the caravan.

When it comes to one or more bikes, then inside the caravan above the axle is the ideal location to minimise handling issues. Carrying them inside also makes them impervious to potential thieves as well as weather issues on the journey, meaning they arrive in the same condition as they left.

However, it’s not all gravy. Getting bikes into the caravan in the first place can be tricky and you need to be careful not to catch or mark the interior.

Similarly, you need to be careful how you stow them for transit and protect the floor, any seat cushions and interior fittings to prevent damage if the bikes shift en route.

It also means that the usefulness of the caravan is compromised during the journey – perhaps not such an issue if you’re not going far from home but it could be a pain if you’re doing a long journey and want to break it up with a rest stop or an overnight halt. And if you’ve been off-piste on trails and can’t clean the bikes before heading home, the interior can get filthy. 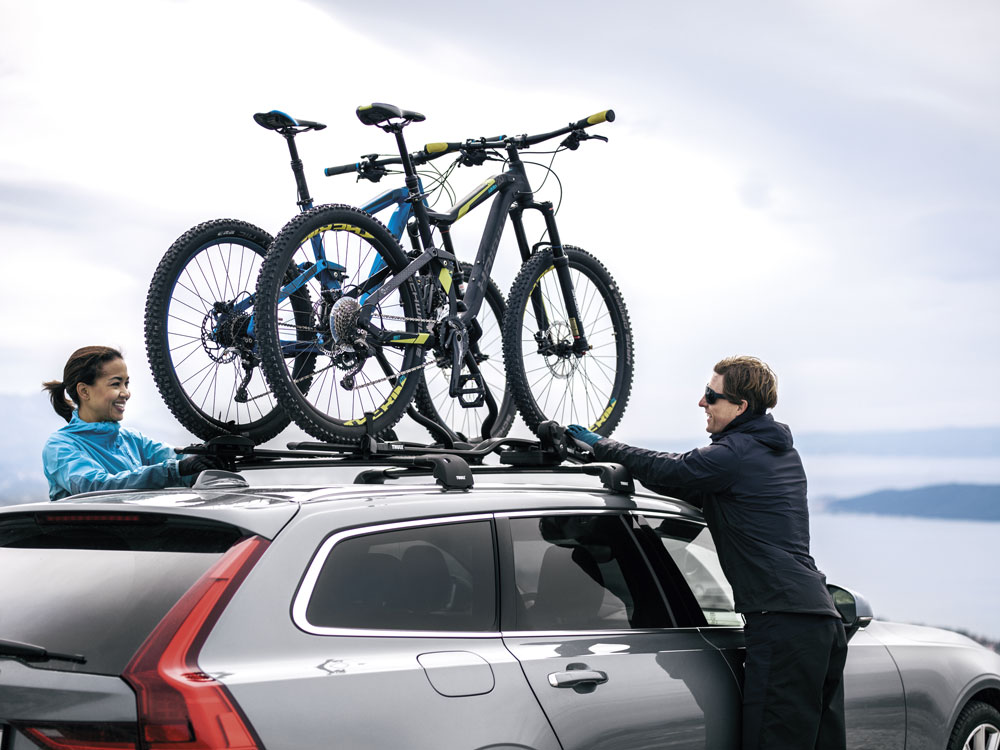 Many people elect to carry one or more bikes on a roof rack on the towcar and there are several benefits of this. First and foremost, carrying them in this way should not affect the handling and stability of the caravan at all – it should tow just as it always does.

You can also still get to the boot of the car in transit as well as the front locker of the caravan and access the caravan if you need to stop on the journey or get anything from inside.

But, of course, there are drawbacks. The major one is loading the bikes. Depending on the tow vehicle, this can be quite an undertaking and, potentially, too much for those with reduced mobility or strength. Lifting a 20kg bike up on top of, say, a full-size SUV, is no mean feat.

The bikes are also exposed en route, meaning thieves can see what they are and decide whether they are worth targeting and they are susceptible to weather, too, though being that high, they are fairly well removed from road grime.

But that in itself brings another issue for consideration – the height of the outfit. Depending on the tow vehicle, the overall height might start to become a problem, with tall vehicles being even higher than the caravan.

You also need to remember not to head for a drive-through car wash once you’ve unhitched and they can generate wind-based noise which can be annoying at best and a nightmare at worst.

Many motorhomes use carriers mounted to the rear of the body, as do many van-based campers. This keeps the bikes out of the interior, meaning it can be used either on short stops or overnighters and doesn’t interfere with the vehicle’s use.

Several caravans are now primed to accept rear-mounted carriers from the factory, with a bracket installed within the rear wall. The advantage of mounting a bike rack here is that access to the caravan’s interior is not compromised.

Mounting the rack itself can be an issue; some caravans have the bracket designed in to specially designed bodywork and it needs finding and the rack fitting.

However, more importantly, there are also potentially significant handling issues with this sort of set-up. This can manifest itself in various ways, including affecting stability by shifting weight back and higher up and reducing the noseweight of the caravan.