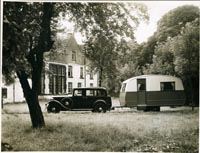 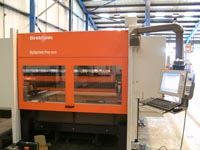 THE Witter name is synonymous with the towbar. Over generations the Witter towing bracket has become the number one choice for those needing to tow a trailer or caravan with their vehicle.

The company has evolved over the last six decades leading the way in the type approval of towing brackets as well as constantly launching new products.

Designing and manufacturing towing brackets has come a long way from the early days when Witter began back in 1950. The Witter bracket has progressed with the latest high tech machinery and highly trained dedicated staff to become the best selling towbar on the market today.

Investment into the latest equipment and skilful people has always been key to the success of the Witter company right from the early days of C.P Witter Ltd. So what is the story behind the success of Witter?

We have to go back beyond the sixty years of the company to look how and why cars needed towing attachments.

Back in the early 1920s there was a growing movement of leisure seekers. Up until the First World War, leisure caravans were for the rich but after the war the growth of motoring had a profound effect on caravanning and when a father and son teamed up to design a caravan (the Eccles) to be pulled behind a car a new pastime was invented. 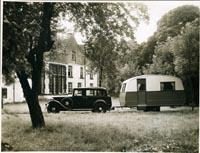 Towing this Eccles in 1919
would have been a challenge

A pin and ring type coupling was used to attach the caravan to the car. With cars having a chassis, a type of bar was bolted to the chassis and a pin coupling placed centrally.

The pin type coupling was to be eventually replaced with a ball-cup design, which was originally designed to be on the tow car and the ball on the caravan/trailer! But things soon changed and the ball coupling was mounted onto the car which proved a far better proposition.

With caravanning growing more popular, by the 1930s the middle classes were finding the hobby affordable. Towbars were still being fitted by some caravan manufacturers and even caravanners themselves.

All types of designs and ideas were used including using the car’s bumper as the towing device. With no legislation the towbar was basically a free-for-all. During World War Two, caravanning virtually stopped but by the late 1940s caravanning was now an increasingly popular holiday experience.

This is where the Witter story begins because Colin Preston Witter, as an engineer by trade, had served with the National Caravan Council (and indeed had been a founder member of this), the British Standards Institution and the Trailer & Technical Committee of the Society of Motor Manufacturers & Traders for many years.

His experience was vast and it was early in 1950 he set up his own business designing and arranging the manufacture of towing brackets by local engineering firms in Chester.

Colin Witter inspects the
millionth production towbar
Colin wanted to make a bracket that not only would be strong and practical to fit, but also he believed that a towing bracket should blend in with the car’s bodywork as much as possible.

The first Witter bracket commercially produced was for the Ford V8 Pilot. From here Colin approached car manufacturers to persuade them to let the Witter company design and manufacture towing brackets for their models.

By the 60s, Witter had moved to a larger manufacturing site at Canal Side in Chester. The Beatles may have been getting all the glory in the pop world back in 1964, but Witter were adding more factory and office extensions as the Witter name became more well known. .

By the 1970s more car manufacturers provided stress points for towbar fitting, so it was becoming easier for fitters to satisfy the growing demand for owners wanting a bracket fitted.

Witter also worked closely with local car dealers especially when a new model was introduced. The new car would be taken into the workshop and measurements taken to enable a towbar to be designed, tested, manufactured and ready for the market within weeks.

In 1975 the company celebrated its 25th year in business and a year later, on March 5th, the millionth towing bracket was made, which was for the once popular car the Triumph 2000.

The 1980s were to see major changes at Witter. Sadly Colin Witter died in 1986 but his legacy would live on. With Brendan and Rodney Witter now at the helm, the two brothers developed the company further over the coming years.

Witter had become the only UK company to test its towbars on a constant basis and to extremes. Specially designed rigs put a towbar under intense stress and Witter’s commitment to quality and safety meant that the company saw this procedure as an on-going one even on the older towbar designs. Witter had also gained the prestigious AA seal of approval tested to BSAU114. In 1982 at the Earls Court Caravan Show the company proudly showed off its two millionth towbar - made for the Ford Sierra saloon.

Exports played a large part in the company’s success. Nissan Norway ordered a considerable number of towbars for the Nissan Sunny while Witter also supplied Toyota and Mitsubishi for the Norwegian market making exports worth over £500,000 in 1986.

This led to increased production and by May 1994 over four million towbars had been produced and by the fiftieth year in 2000 the figure reached five million!

In 1995 Witter was the first towbar manufacturer to produce a towbar that met with 94/20/EC type approval legislation which was a further step to give customer confidence in the Witter brand.

A move to Deeside

With Witter’s increasing market share, in 1997 the warehousing of towbars was moved to Deeside (images of factory and equipment below)

Five years later, in 2002, the offices and engineering centre had all been relocated to the Deeside manufacturing and warehousing complex – and were formally opened by the Duke of Westminster.

The company’s whole operation has been going through changes, from the way the towbars are manufactured down to the way they are packed and despatched.

It seems Witter won’t be seen standing still. As well as offering support through over 450 stockists nationwide, they are the first towbar company to offer an online towbar booking service.