New Lunar caravans for sale for 2016 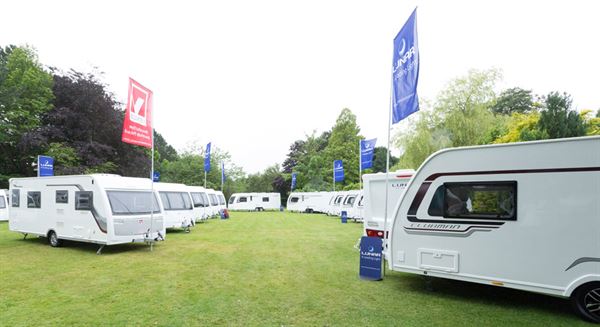 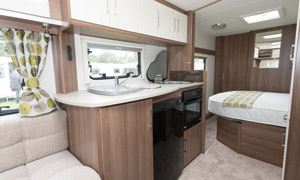 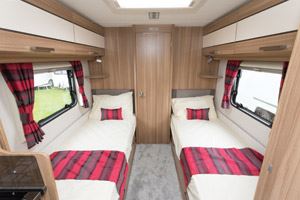 Four of the new models from the Preston-based manufacturers have island beds, testament to the growing popularity of this layout. These are in the Venus, Quasar, Lexon and Delta ranges.

The new Lunar Delta model, called the RI, has its transverse island bed at the rear, with separate shower and toilet-washroom centrally placed. The Lexon range gets a new twin-bed offering called the 570.

A new family layout, the 580, will be unveiled at The Lawns caravan show (5 and 6 September at Cottingham, East Yorkshire).

New features throughout both Venus and Lunar ranges include wide, deep, oval washbasins mounted on top of cabinets, while all Lunar models have new one-piece doors. 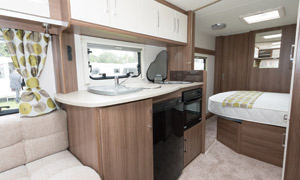 Caravans in the Quasar range also get gun-metal grey alloy wheels and new style, square corner lights emitting beams from both the top and the bottom of the unit. The LED ceiling lights are set into mirrored mounts and are dimmable.

Locker doors in Quasars are now in matt cream. The Truma blown-air heating system has the addition of Isotherm ducting, enabling warmed air to rise from behind the settee backrests.

The sinks are a new style, in stainless steel. Kitchen splashbacks are new, too, in a ‘bamboo’ design in fawn shades. And showers now have inset ceiling lights.

Quasar seating fabrics are pale, plain green, with bolder, soft green curtains. Big scatter cushions, a prominent feature of the décor, have prints of postcards from around the world, designed to invoke thoughts of holidays. 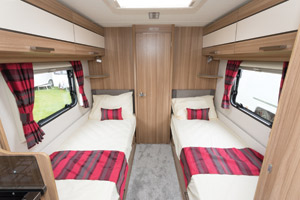 Lexons also get long ‘skyview’ rooflights and new steel sinks. Locker doors have cream gloss sections. Corner lights are a new cube shape. And there’s a new lighting feature in Lexon kitchens. It’s backlighting around the top lockers, creating a rim of light. New heavy-duty stain-resistant carpets are in both the Lexon and Quasar ranges.

Lexon fabrics are greys and reds for 2016; plain grey for the seating, grey animal-print for the backrests, and curtains and cushions of rich, deep red combined with greys in a striped design.

The Clubman ES, which has a side dining area layout, has been revised for the new model year, creating longer front settees. It’s now a three-berth caravan, with the option to buy a bunk over the dining area.

New features in Clubman and Delta ranges include ‘skyview’ rooflights – which are both longer and wider than in 2015 models – stain-resistant carpets and a new in-line pump in the Alde heating system to enable quicker warm-up. Gloss cream locker doors are also introduced.

Seating fabric stays the same for the new model year; it’s a tactile, plain, cream fabric. For 2016 it is teamed with pastel blue curtains and cushions which have a raised pattern featuring a twig design.

For more information on the 2016 Lunar range contact Campbells Caravans

or visit the Lunar manufacturer homepage.