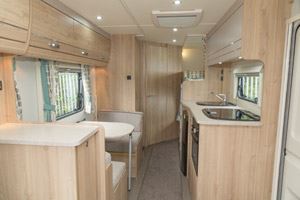 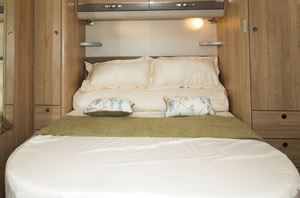 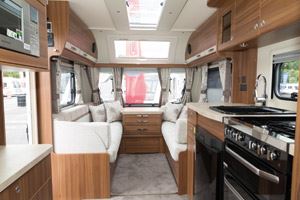 Retractable twin beds and a new six-berth twin-axle model are among announcements in the Explorer Group’s Elddis, Xplore, Compass and Buccaneer caravan ranges for 2016

There are changes and new features in all four brands for the new model year. All models have new television aerials. These are the Teleco Teleplus model.

The 42-model portfolio was unveiled at the manufacturer’s factory, in Consett, County Durham.

All the group’s ranges of caravans are made using the fully-bonded SoLiD construction system, which carries a 10-year warranty. 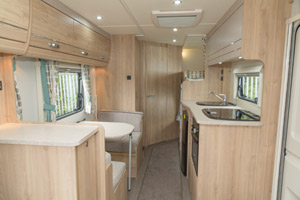 The new model in the Xplore range is the six-berth 586, with bunk beds plus a two-seater dining area making into two more bunks. The price will be £15,399.

The lightweight Xplore range, designed to tempt new people into caravanning, gets a stronger identity for 2016 with vivid turquoise graphics that extend up into the roofline and onto the front panel below the window, with the model number sitting in a prominent turquoise semi-circle.

The turquoise theme continues inside, on curtains and cushions, where bright green is introduced. Woodwork for 2016 is pale and a new vinyl floorcovering is introduced; that, too, is pale, in a grey shade.

A new control panel for the Whale water and space heater arrives for 2016. Designed to be ultra easy to use, it has simple plus and minus buttons for heat adjustment and a line of orange lights to indicate the temperature selected. Prices of all Xplore models rise, by up to £200. 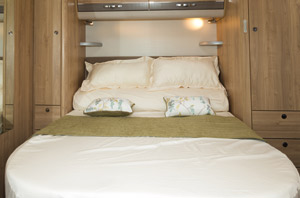 Avantés get new wide roof lights and a new water and space heating system. It’s the Whale Expanse unit, mounted under the floor, freeing up cabinet space for storage.

The system can use used on gas or electricity, or both together, for faster warm-up time.

It delivers enough hot water for a 14-litre shower in 11 minutes, and then reheats enough water for a second shower in a further eight minutes.

The Whale Expanse space and water heating system is exclusive to Avanté caravans for 2016.

The new model in the Avanté range is designed for couples. The 554 has an island bed at the rear of the caravan and the shower and toilet opposite one another, forward of the bedroom. This caravan will be £17,799. Prices of Avanté rise by between £350 and £400. 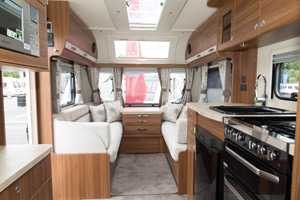 New “skyscraper” long slender rooflights are introduced to the Affinity range. They are surrounded by eight lights set into a white frame.

Another new lighting feature introduced for 2016 is in fixed-bed models. The headboards are back-lit, creating a halo of light.

USB points are now on the front windowsills. And Aquaclean upholstery is now standard. This type of fabric is designed to be wiped clean with water and a cloth.

Affinitys also get the Ecocamel Orbit circular air-inlet shower head. Affinity prices rise by between £200 and £300. 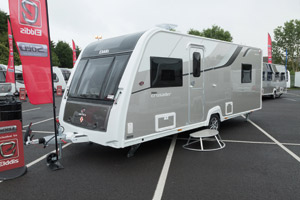 All crusader models get a new exterior colour for 2016. It’s called Champagne and sparkles in sunlight.

Lighting under the kitchen worktops is introduced, sending a steam of light shining down the kitchen cabinets. USB points arrive in the lounges of Crusaders, too.

A new model joins the Crusader range. The Aurora is a single axle model with an island bed at the rear of the caravan. The price of the Aurora will be £22,599.

The price of the single-axle Mistral goes up by £304. The prices of the twin-axle Crusaders rises by £400.

Buccaneers are wider than all other mainstream tourers made in Britain, at 2.45m. That’s 15cm wider than Crusaders, for example. The additional width has made it possible for Buccaneer’s designers to create a unique layout that wouldn’t be possible in a caravan of standard width.

The new Buccaneer Clipper has transverse twin beds which are aligned across the caravan. They retract, by around 40cm, turning them into settees, creating a second lounge, for relaxing with feet up.

Coronas get oblong roof lights for 2016. Compass calls them “stargazer” rooflights. The new model in the range is the transverse island bed 554. It has a new retractable bed construction, to create more floor space during the day. The price will be £18,599.

When Compass was reintroduced for the 2014 season the layouts were designed to appeal to couples. Now, for 2016, Rallye gets a family layout in its range. The 636 is a six-berth with bunk beds. The price will be £25,399.

Aquaclean fabrics are introduced across the range. Fixed beds get new retractable mechanisms and back-lit headboards.

All prices are plus £495 retailer delivery fee.