New Bailey caravans for sale for 2016 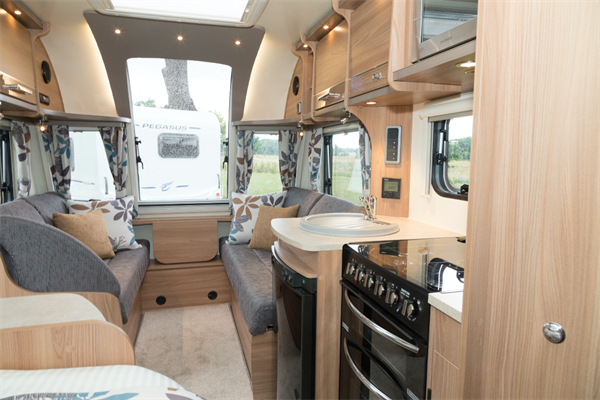 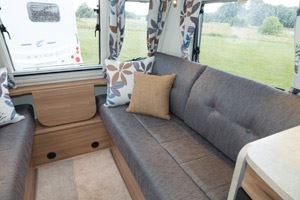 The Pegasus caravan range gets big changes for 2016, with four new layouts and a unique lounge-bed construction

Weight, price and upholstery construction all change in the Pegasus range of caravans for sale for the new model year.

Exterior looks are closer to Unicorns, with a change from cream to white, and the big, bold graphics incorporating the Bailey ‘B’ along the sides. Interior furnishings look more like Unicorns, too, with part-gloss locker doors and pale fawn ‘Italian stone’ kitchen surfaces, with hinged extensions.

Dual fuel hobs are introduced. Kitchen windows are larger. And some models have the new, tall Dometic 133-litre fridge-freezer.

Standard fabric, called Richmond, is a pale fawn, teamed with curtains and cushions in a red pattern. An option, at £199, is the Belvoir fabric scheme, with darker seating cushions. 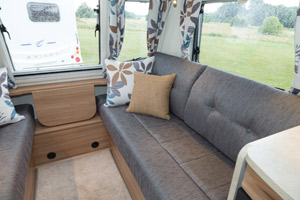 The biggest interior change is in Pegasus lounges, with a settee construction called DreamSleep, which transforms into a double bed in less than a minute.

The seat sections fold out, to make the mattress. The backrests don’t form part of the bed, and two of the four can be used as pillows. These backrests are higher, closer to the height you’d find in a domestic settee, and they’re shaped to support both back and shoulders.

Unique to Bailey, the DreamSleep settee-bed sections are made from high quality, dense foam, with fibres that are aligned vertically. The density of the foam has enabled the seating to be reduced slightly in depth.

The DreamSleep construction method, made in Derbyshire by caravan upholstery maker, Belfield, is also used for Pegasus mattresses, where a honeycore foam is used. Peter Leavy, Belfield’s general manager, explains: “Honeycore reacts like a pocket-sprung mattress, allowing it to compress while also giving comfort. It also prevents moisture retention.”

The new Pegasus range has the Truma Combi 6 E blown-air heating system, which gives out up to 6kW of power. It achieved Grade III temperature and insulation testing (the caravan industry benchmark) in record time.

The test specifies a caravan must warm up from -15ºC to +15ºC in four hours. When a Pegasus Verona was tested for Grade III certification in the Truma Climate Centre cold chamber, the temperature rose to 15ºC in 64 minutes.

Martin Fitzpatrick, managing director of Truma UK, explained to Caravan magazine that this was the fastest warm-up time achieved so far by a caravan “by a significant margin.” He added: “We haven’t had a caravan of comparable size warm up in less than two hours, other than the Verona.”

The Combi 6 E uses both gas and mains power; gas gets you a rapid warm-up and then the system switches automatically to electricity to maintain the temperature you have selected.

All ducting on Pegasus models is inside. Bailey has fitted this system to heat the three zones of each layout evenly, with specific ducting to washrooms, bed areas and lounges.

An optional extra iNet box, available from October, will enable you to control the Combi 6 E from your phone or tablet. Within eight metres of the caravan it works with Bluetooth; for use beyond that range, you insert a SIM card into the iNet box. That gives you the ability to control the heating from up to seven phones or tablets.

The cost of the iNet box will be £250; it can be fitted in less than an hour by Bailey retailers.

Keep your new caravan safe with our essential security guide

Both weights and prices are reduced in most Pegasus models, by up to 22kg and £400.

Three new layouts are introduced. These are the Modena, with a fixed bed; the Brindisi with a transverse island bed; and the Palermo, a twin-axle five-berth with bunk beds.

The Ancona gets a completely new layout, with a full-width shower room and bunks, plus a dining area in the centre of the caravan.

The new Bailey caravans for the 2016 touring season

This model has a large split-level dresser opposite the kitchen, and a tower-style fridge-freezer with a microwave above it.

The Brindisi has an island bed; it’s a similar layout to the Bailey Unicorn Vigo, and with a 133-litre fridge-freezer. A television bracket is mounted on the offside wall of the bedroom, on a wide upholstered panel. This model’s MTPLM is 1450kg; its price is £17,999.

This year's Veronas, with end shower rooms and double beds on the nearside, are now £17,999; that’s down by £71. Verona weights also go down by 2kg.

The twin-axle Palermo sleeps five. It has a full-width shower room and a central family bedroom, with bunks and a single bed to create from a two-seat dining area. Like the Ancona, the Palermo can be converted to a six-berth with the option of a bunk to go above the dining area. Palermos have the Dometic 133-litre fridge-freezer.

The five-berth Ancona’s bunks, plus the seating area that creates a fifth bed, move to the centre of the caravan. A full-width shower room is introduced. The Ancona goes down in weight by 20kg and in price by £386. Buyers have the option to turn the Ancona into a six-berth by buying a bunk to go above the dining area.

For more information on the 2016 Bailey range contact Campbells Caravans

or visit the Bailey manufacturer homepage.