New Adria caravans for sale for 2016 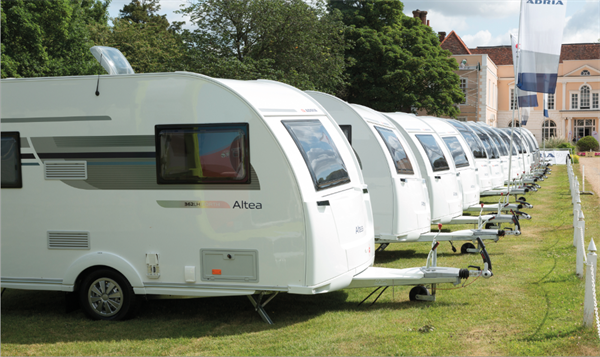 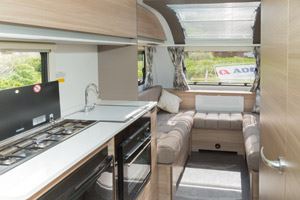 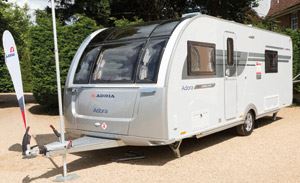 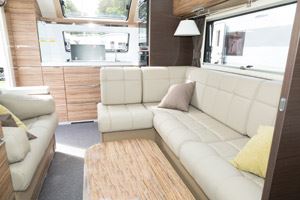 For 2016, Adria introduces two Silver Collection models with additional equipment to mark the company’s 50th year since the start of manufacture, and two models are reduced by £740.

Of the Silver Collection, one is a special edition of the best seller in the Adora range, the transverse island-bed Isonzo.

The other is a new family layout in the lightweight Altea range.

Called the Eden (the models in this range are named after British rivers), this new tourer has a five-berth layout with two lounges. 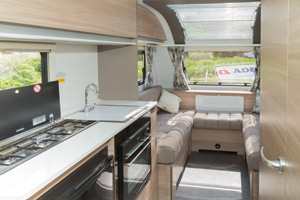 Unlike the other four models in the Altea range, the Silver Collection Eden has silver sideskirts, plus silver front and rear panels.

It has additional equipment, compared to the other Altea models, including carpets, a microwave, a spare wheel, alloy wheels, a sink cover that can be used as a chopping board, and a drainer. And the Truma Ultraheat electric function is also included; all other Alteas are heated only by gas.

The body length of the Eden is 4.72m. It has a rear lounge which can be made into a double bed with a bunk above, and a front U-shaped lounge which makes a second double bed.

The Eden shares the huge, high-arching sunroof feature with Adora models. The combined shower-toilet compartment is compact, situated on the offside, amidships.

This model is the first twin-lounge layout produced by Adria. The price will be £15,390. There are two other family layouts in the Altea range – the six-berth Tamar and the Severn, both with bunk beds and both with MTPLM figures of 1500kg.

One other caravan in the Altea range goes into 2016 unchanged. It’s the 4four Signature, a special edition of the Forth, available in a choice of exterior colours including bright lime green.

This caravan is only 4.28m in body length, yet has the capability to sleep four, with the U-shaped lounge making into a bed for three, and a bunk above it.

The 4four has additional equipment compared to all other Alteas, including an iPad docking station, a high-arching panoramic roof and a tall, slimline fridge, made by Thetford. It’s just 41.8cm wide (compared with conventional Thetford fridges at 52cm) and 1.5m tall. Its capacity is 140 litres, with a 15-litre freezer. 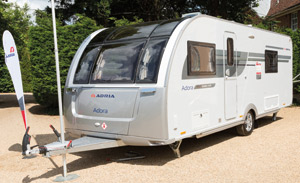 The special Silver Collection edition of the Adora Isonzo, like the Altea Eden, has silver sideskirts, front and rear panels. And this is the only caravan in the Adora range to have Alde heating. Its extra equipment compared to other Adoras also includes a microwave.

The kitchen layout changes for 2016, as the oven and grill are repositioned from aft of the kitchen to within the units. This is to allow space for the inclusion of a new fridge: the slimline, tall, 140-litre capacity model that first appeared in the Altea 4four for 2015.

Alongside the oven and grill are three drawers, with three more in a single, slim pull-out unit on the fore end of the kitchen.

Isonzo wardrobes are in the same position as those in the original model: on the nearside, with a full-height shelved unit alongside. The change from Truma heating to Alde means the space under the wardrobe, where the heater unit was situated, is now a large storage area.

The price of the Isonzo Silver edition will be £19,390. That’s £455 more than the standard Isonzo launched for the 2015 season, but with additional equipment amounting in value to more than £3200.

Read about how to get the most from caravan reviews

Adora fabrics for 2016 are plain grey seating upholstery with a fine zig-zag pattern, teamed with stunning black and silver curtains. They have silver stripes graduating in width towards the centre of the curtains. A grey kitchen splashback and white surfaces enhance the ultra-modern scheme.

The Isonzo first appeared for the 2014 model year and won Caravan magazine’s Caravan of the Year 2014 title. 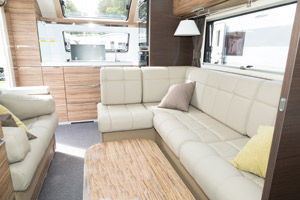 Adria’s two top-spec Astella models also go into 2016 with unchanged layouts but with two key differences. Both models, the twin-bed Amazon and the double-bed Rio Grande, will have 50-litre inboard water tanks.

The other change is that both models are now four berths, with the capability to create double beds in the lounge, which is in the centre of the layout. These lounges have two settees, one two-seater on the nearside, and a larger, L-shaped seating area on the offside. It is this unit which forms the double bed.