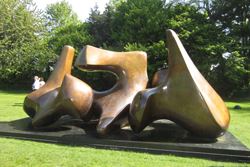 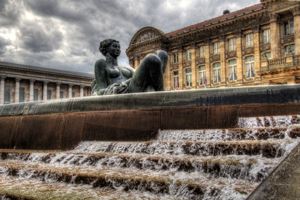 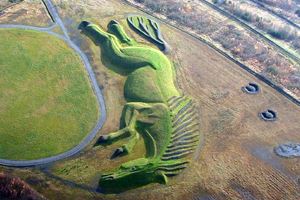 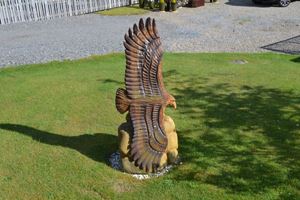 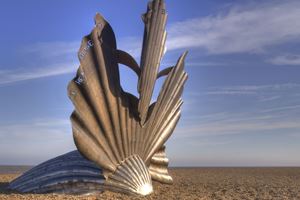 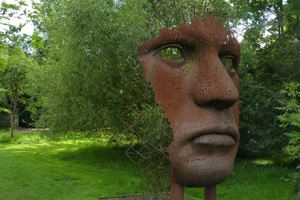 When out and about on your next caravan holiday how about indulging your cultured side and staying on a campsite with artwork nearby.

We've selected 10 top sites below where there are either creative carvings on site, or you're close to sculpture gardens featuring works from famous sculptors such as Henry Moore and Barbara Hepworth. We've even got campsites near open-air grand creations from the likes of Damien Hirst and Antony Gormley.

All that is left is for you to decide whether it counts as art or not ... 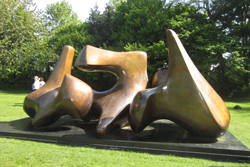 Henry Moore was an English artist and sculptor best known for his semi-abstract bronze sculptures. In Perry Green in Hertfordshire (SG10 6EE), you’ll find the Henry Moore Foundation – a charity established for education and promotion of the fine arts, and an exhibition of works by the artist. There is Moore’s family home, a gallery and sculpture gardens, along with a visitor centre, gift shop, tea room and village green with pub. The sculpture garden contains more than 25 pieces of sculpture by both Henry Moore and fellow artists.

Lee Valley Caravan Park is located 10 miles away from Perry Green. There are cycling and walking routes to explore, with fishing nearby, plus a riverside pub and café. Lee Valley White Water Centre is close,
too. Central London is just 30 minutes away by train from the local station.

English artist, Damien Hirst, is famous for his controversial artistic creations. He created another piece that divided opinion when it was hoisted into position on Ilfracombe’s pier in October 2012. Verity, as she is called, is a 20m-high bronze-clad sculpture, depicted pregnant, holding a sword and standing on a base of legal books. Half of the sculpture shows the internal anatomy of the pregnant woman with the other half being more like a traditional sculpture.

Newberry Valley is a countryside retreat just 15 minutes’ drive from Ilfracombe. Set among rolling Devon countryside there is plenty of walking available through fields and woodland. The site has a fishing lake and the beach at Combe Martin is five minutes’ walk away. Nine miles south is Broomhill Sculpture Gardens (EX31 4EX) which showcases a variety of outdoor art surrounded by hundreds of acres of woodland and bounded by its own stream. 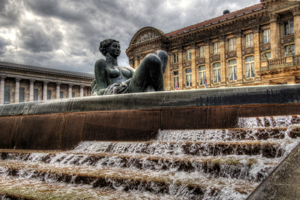 Victoria Square in Birmingham is a pedestrianised area where several pieces of artwork are located, the most notable being Antony Gormley’s Iron:Man. The sculpture is six metres tall and purposely tilted. Its backdrop is the Town Hall and Council buildings and another sculpture is a large fountain entitled The River, known locally as The Floozie in the Jacuzzi. The River features a 1.75-tonne bronze statue of a woman, nearly three metres tall.

Chapel Lane Caravan Club Site is close to the major motorways, the NEC and Birmingham city centre. There’s a handy bus stop just 50 yards from the site entrance, so getting into the city is easy. The campsite is set in the shadow of an old chapel with museums close by exploring the industrial heritage of the area. 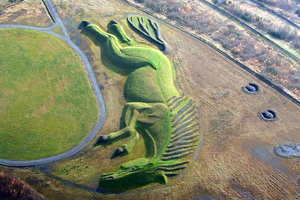 Claimed to be the UK’s largest figurative earth sculpture, Sultan the pit pony is the centrepiece of Caerphilly’s Parc Penallta country park. Carved from a former slag heap it is rather large at 200m long. This and other sculptures throughout the park are connected by an audio trail, and there are a number of walking and cycling routes as well as fishing lakes and a children’s wildlife trail.

In the middle of Cwmcarn Forest, but with a surprising number of houses nearby, Cwmcarn Forest Campsite has mainly grass pitches and is next door to a visitor centre with café and gift shop. It is within easy reach of a number of villages with pubs and shops, and just a 20-minute drive from the sculpture work at Parc Penallta.

Just one mile from Junction 38 of the M1, between Barnsley and Wakefield, is the award-winning open air gallery, the Yorkshire Sculpture Park. Home to the works of many British and international artists, including Henry Moore and Barbara Hepworth, the Yorkshire Sculpture Park occupies the parkland of Bretton Hall and is one of the largest outdoor displays of Moore’s bronzes within Europe. This ‘gallery without walls’ has an ever-changing exhibition programme rather than permanent displays, unlike some of the other sculpture parks across the UK.

Nostell Priory Holiday Park is situated within the grounds of the National Trust’s Nostell Priory Estate. The holiday park nestles in a forest glade with a small shop and a bowling green. Wakefield is six-and-a-half miles away and the Yorkshire Sculpture Park is 12 miles. 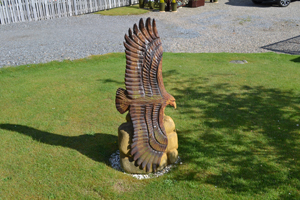 The Scottish Highlands provide the best opportunities in the UK to spot the golden eagle, the most emblematic predator on these shores. If the real thing proves elusive, the life-size carving at Grantown-on-Spey Caravan Park provides a reminder of just how impressive they are. With a 2m wingspan, it stands guard next to the otherwise-utilitarian caravan storage area.

The campsite is impressively well maintained and provides long views over the hills of Speyside. Located on the outskirts of the charming town, it is a short walk to pubs, restaurants, shops and takeaways. If the golden eagle doesn’t provide enough animal-based statuary, it’s only a few miles north to Loch Ness. Here another famously elusive creature is presented in a life-size model, outside the Loch Ness Exhibition Centre. 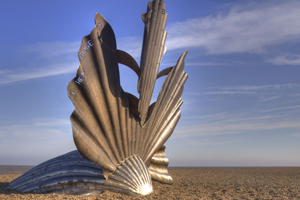 Benjamin Britten, one of the 20th century’s most important composers, spent much of his life in Aldeburgh and nearby Snape. In 2003, a tribute to Britten was unveiled on the beach north of Aldeburgh near the Thorpe Road car park. Scallop, a four-metre high steel sculpture, was conceived and constructed by a Suffolk-born artist, Maggi Hambling, and local craftsmen. A phrase from Britten's work is pierced through the steel, ‘I hear those voices that will not be drowned’.

A handy half-mile walk from where Scallop is located you’ll find Church Farm Holiday Park. A choice of fully serviced or non-serviced pitches are available, both are on grass. The toilet and shower facilities are heated and there is also a laundry and dish-washing area.

For anyone travelling on the A1 near Gateshead, Antony Gormley’s sculpture, Angel of the North, is an impressive sight. Rising 20m high, with a wingspan of 54m (about the same as those of a jumbo jet), and made from 200 tonnes of steel, the Angel is a major visitor attraction. Just glancing at it from your caravan as you drive by, though, doesn’t really do the artwork justice; you simply have to stand beneath it to really appreciate this massive sculpture. The car park for the Angel is signposted from the A1 and then it’s a short walk to the hilltop where the figure stands.

Set four-and-a-half miles from the Angel of the North is Bobby Shafto Caravan Park. Named after an 18th century British MP who was the subject of a famous north-east folk song, the caravan park is located in a secluded position with panoramic views of the region. 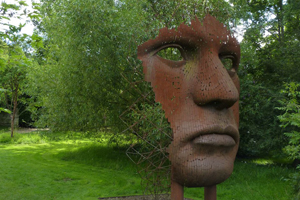 Home to contemporary sculpture in the historic setting of a stately home that proclaims itself England’s greatest Elizabethan house, the Burghley House Sculpture Garden, near Stamford in Lincolnshire, includes a number of permanent artworks plus annual exhibitions from April to October. The House and Gardens of Surprise are open from 14 March until 1 November (closed during the horse trials 3-6 Sept).

Top Farm is a five-pitch certificated site on a quiet country lane close to the historic town of Stamford. It’s a short walk to the village of Ryhall, with a pub and shop, while the charming Georgian town of Stamford is three miles away and offers a variety of restaurants, cafés, and high street shopping. It’s another couple of miles to Burghley House.

The sculptor, Barbara Hepworth, lived and worked in St Ives from 1949 to 1975, mostly at the Trewyn Studio which now houses her museum and sculpture garden. Here you can see some of the giant bronzes for which she became famous, along with earlier stone and wood carvings, in the environment where they were created. The nearby Tate St Ives extends the cultural appeal of the town, long a magnet for artists and art lovers.

Half an hour away on a good day, Tehidy Holiday Park has its own claim to sculptural fame. Rather than simply uproot a dying tree on the site, the park owners commissioned UK chainsaw carving champion, Matt Crabb, to transform it into art. The result is known as Two Squirrels, and is just one of a number of artistic and environmental touches around this well-regarded and beautifully maintained Cornish campsite.