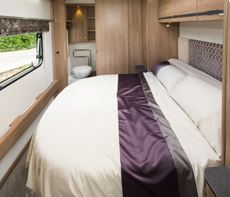 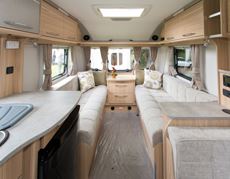 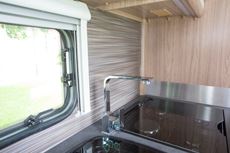 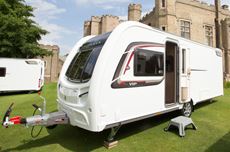 Coachman Caravans brings the transverse island bed concept into its Vision, Pastiche and VIP ranges for 2015.

There are changes to the Pastiche range for 2015. Panoramic skylights are introduced, and this range will be the same width as the Vision (2.26m), which is slightly narrower than previous Pastiche models. Weights have yet to be announced. These figures will be slightly lower than previous Pastiches. Prices are also expected to the lower than 2014 models.
The width stays the same for the VIP range, at 2.32m. A big change for VIPs is the switch from Truma blown air to Alde heating for 2015.

All Coachman’s ranges for 2015 will have bonded polyurethane wall construction. Coachman tells us that the advantages of using this build system go further than impermeability to water; it makes construction simpler and improves efficiency, because the sides arrive at the factory pre-shaped.

In the Vision range, a new 575/4 transverse bed model will be launched in September. The 570/6, the six-berth with bunks and a nearside dining area, has been discontinued for 2015. 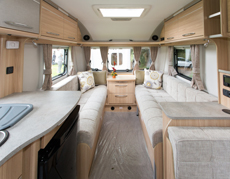 The Pioneer radio/CD unit will incorporate USB, iPod and smartphone connectivity. Along with all models, the showerhead will be the Ecocamel type, with an air inlet which increases flow rate.
Again in common with all models, Visions will have new chrome spotlights, oak-effect floorcovering and square push-button catches.
Visions and Pastiches will have Truma central heating vents in black instead of brown.


Pastiche gets a new look 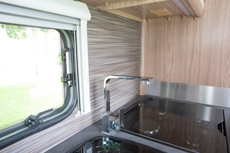 In the Pastiche range, furniture has been redesigned. It’s the same delightfully modern milk-chocolate colour as that in the VIP but with flat styling, rather than the curved locker door shapes in the VIP.
Laminated kitchen splashbacks have been introduced in the Pastiche, VIP and Laser ranges. End shower room models in these three ranges will have back-lit mirrors, with strips of LED lighting set within the glass, vertically along each side.
The new transverse-bed layout Pastiche 575/4 will be launched in September. 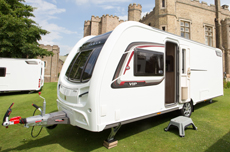 The VIP range will now have Alde central heating, in common with the twin-axle Laser models. There will be Alde heated towel rails in these models.
The two-berth, end-shower-room VIP 460/2 will have a redesigned shelved cabinet alongside the wardrobe in the shower room. Where previous models had open shelving, the 2015 460/2s have a cabinet, containing shelves which can be accessed both from within the wardrobe and via the cabinet door close to the mirror.

The big news for the Laser range is that a new model will be introduced. The 650/4 will be one of only a very few caravans to have an island bed positioned against the rear wall. The shower and toilet rooms will be opposite one another forward of the bed. This model will be launched at the October NEC caravan show.

Newly-launched Ozio upholstery from Leisure Furnishings will be in all ranges. It’s a triple-layer construction. The outer two layers are made of vertically-lapped fibres, bound so that they all lie in the same direction, and designed to ensure breathability. The seating and mattresses are up to 30% lighter than sprung upholstery, reducing caravan weights and making seating units easier to lift and turn to create double beds in lounges.


Back to "General" Category