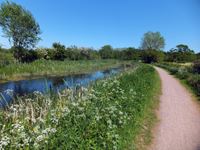 With the Tour de France soon to come to England we've put together a list of our top campsites for your own bike-based fun, whether that be following the towpath alongside a canal or cycling in the tyre marks of the Tour de France contenders.

Time to dust off and oil up that old bike that’s been lurking in the back of the garage, to take part in the first-ever L’Eroica Britannia (Italian for ‘the heroes’). This is billed as a celebration of the golden years of cycling, to be held in Derbyshire from 20 to 22 June 2014 as part of the Peak District Summer of Cycling – one of the many events inspired by the Tour de France UK. It’s a three-day rally and is only open to riders of ‘heroic’ bicycles, defined as those made before 1987.

Your £70 entry fee (£45 concessions) includes three nights’ camping at the temporary site on the Buxton Showground, plus jersey and bike numbers, an unspecified souvenir, and post-ride food. There are loos and free showers on the campsite, but no hook-ups. Other bike-based events around Derbyshire this summer can be found at summerofcycling.co.uk 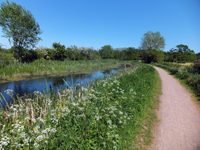 Minnows is a Caravan Club Affiliated Site, welcoming both members and non-members, situated alongside the Grand Western Canal in Devon. The canal towpath is ideal for cycling and is part of the Sustrans National Cycle Network which provides traffic-free lanes and quiet on-road routes across the UK. The canal is famed for its horse-drawn barge which takes passengers on cruises along the water and there’s also a nature reserve, pub and café bar along the cycle route. This year promises to be an extra-special time for the canal and the horse-drawn barge as they celebrate their 200th and 40th birthdays respectively.

The campsite has 59 pitches all with electric, of which 14 are fully serviced. A number of the pitches are arranged around the children’s play area, making it perfect for families. A handy feature of Minnows is that bike hire is available with bikes delivered to and collected from the site.

This Premier Park has many excellent facilities, including an on-site farm shop selling local meats and other foodie delicacies, but it is the purpose-made BMX and mountain biking tracks built into its woodland that make it a top destination for bike enthusiasts. Located just beyond the touring fields, these allow off-road bikers to practice their skills to their hearts’ content. One circuit is designated a ‘pumping’ track, designed to be traversed without using the pedals – a great way of developing skills and getting a good cardio-vascular workout.

This campsite also appeals to anglers, with its well-stocked lake, and on site you will find a high standard of facilities, with spacious hardstanding or grass pitches and a children’s play area.

Once an overnight camping ground for drovers bringing their sheep from the Welsh mountains to the markets of the English Midlands, Disserth Caravan and Camping Park has a long history of accommodating travellers. And if you’re interested in history, it’s just a short ride to the National Cycle Collection at Llandrindod Wells (cyclemuseum.org.uk). Here you can follow the development of the modern bike from the boneshakers of the 19th century to the carbon fibre wonders of today.

For more active biking around here, there are many paths radiating from the campsite and the whole county of Powys is criss-crossed with public rights of way for the serious cyclist. The campsite is right next to National Cycle Route 8, which runs from Cardiff to Holyhead.

Two legs of the Tour de France in Yorkshire, and a third from Cambridge to London, are certain to bring Tour de France fever to many armchair athletes. If you plan to emulate the likes of Bradley Wiggins and Chris Froome by riding these roads yourself, before or after the great event, head for Harrogate. This is one of the two sweet spots where the routes of the first two days cross.

High Moor Farm Park is a high quality campsite close to the route of both the first and second stages of the 2014 Tour de France. Open to caravans and motorhomes only, it has a licensed bar serving quality hot food, a nine-hole golf course, bowls and fishing. A four-mile run into Harrogate offers shopping, culture and the place where the first stage reaches its climax. But it’s the chance to engage with the imaginary peloton on the A59 that makes this place a cyclist’s dream this year.

Think of Cambridge and you probably think of the university, one of the finest in the world, and of undergraduates punting on the River Cam or cycling between lectures. This is the cycling capital of the country, with more bikes per head of population than any other town in the UK. Transport policies that favour pedal power over cars are part of the reason, but the distinct lack of hills in the surrounding countryside also makes cycling around here a delight.

The Cherry Hinton campsite is built in a former quarry and the city itself is easily accessed both by cycle paths and by bus. Should you venture into the city on two wheels, a couple of words of caution: some of the roads have scarily-deep gutters, which you really want to avoid and, as well as being the UK’s cycling capital, Cambridge also has the UK’s highest rate of cycle theft. So keep your eyes on the road rather than the architecture, and bring a decent bike lock.