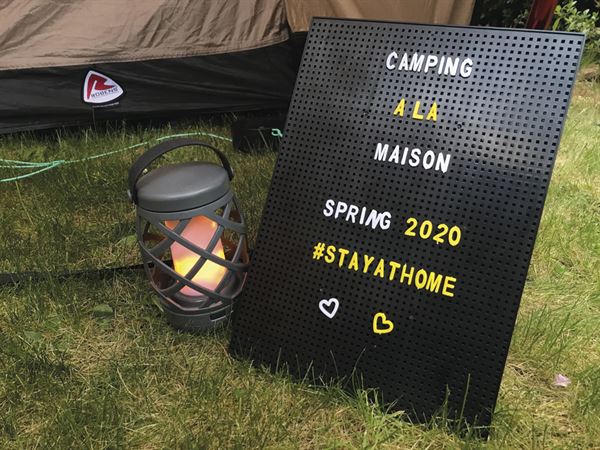 Way back in March, with the Easter holidays and the start of the camping season just around the corner, we were all told to stay at home. With lockdown enforced, campsites closed. Staying anywhere overnight was forbidden.

But then something amazing happened. All over the country, people started to camp out at home. Tents went up in back gardens and makeshift shelters were set up in living rooms. And despite everything, for many it offered a much-needed escape from reality.

We wanted to take a moment to reflect on and celebrate the home camping phenomenon that emerged as families were told to stay at home.

One of the biggest influencers was the establishment of the Facebook group Great British Campout for NHS Staff. It was set up towards the end of March by Ian Alcorn to raise £100 for NHS Charities Together by encouraging friends to camp out in their homes and gardens at the weekend.

Campers were asked to donate a ‘pitch fee’ of at least £2. But the group went viral and within days fundraising had passed the £10,000 mark. I was among those camping out during the first event and wrote about it for Camping magazine at the time. By the end of that first weekend, more than £25,000 had been raised and the Facebook feed had exploded with excited chatter as campers shared their adventures and set-ups online.

Events got bigger and bolder over subsequent bank holiday weekends as it caught people’s imagination and, by early June, the Facebook page had more than 37,000 members, more than 13,000 of whom had donated to raise more than £170,000. Coupled with Gift Aid donations and sales of associated merchandise, it meant more than £200,000 had been raised. The group’s founder, Ian, was recognised with a Points of Light award from the Prime Minister.

For many, stay at home camping has enabled families to reconnect at a time when connection has been more important than ever. “It meant that instead of sitting in front of a screen every evening we spent time playing games, reading and talking to each other,” says Steve Milligan, who camped out with his wife Janey and daughter Amber.

“We love, love, love, our camping – it’s our family’s happy place,” says Lee McKean, whose 11-year-old twins Libby and Tom have been camping in their two-man tent in the garden as the family’s usual tent is too big.

“Although camping in the garden can’t compare to the relaxation of being away, or the opportunity to experience and explore different places and meet fellow campers, it offered us a mini-break from the home-schooling/working-from-home routine, as well as helping us get another good night’s sleep under the stars,” says Lee.

Camping - providing an escape from reality

Many have applauded the opportunity for escape that stay-at-home camping has given them, but it has been especially important for those keyworkers who operated on the frontline throughout.

Helen Cox works in a local community pharmacy. She says her children Annalea (9) and Owen (7) (picture below) were worried about her going to work so were excited about the idea of the NHS fundraising campout, because they saw it as helping her. It also gave the normally active family something to focus on. 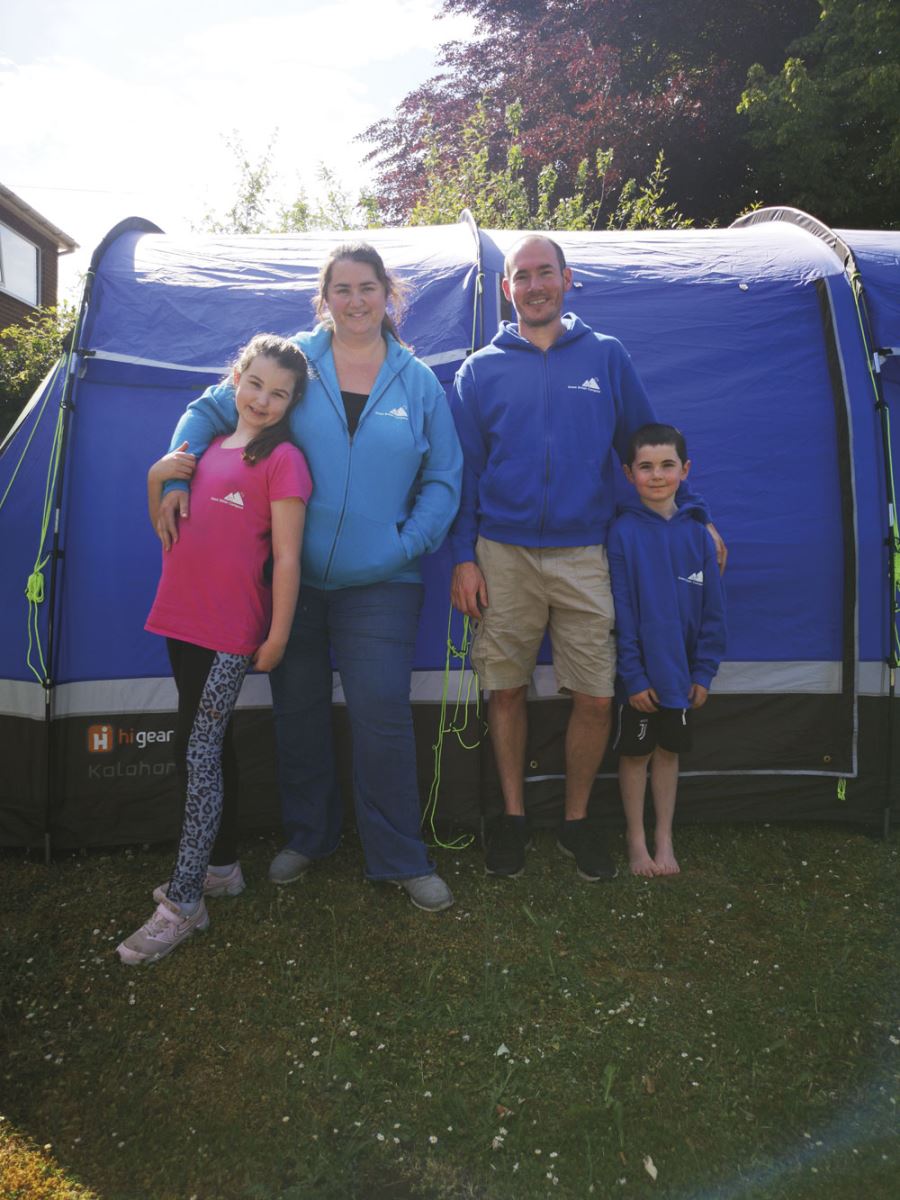 “When we first found out about the Great British Campout the kids had already built a den in the lounge,” she says. “As I was working 12-hour shifts over the Easter weekend they took it in turns to sleep in the two-man tent in the garden with my husband Daz. The other would sleep in the den in the lounge.

“I had Easter Monday off work, so we put up our large eight-man tent so we could all sleep out together. We made s’mores using the chiminea, played games and curled up and read stories.”

Camping in all sorts of places

At the start of lockdown many were camping inside simply because it was the warmer option. Alan Shorter and his family camped in their lounge. “The kids thoroughly enjoyed being able to watch their favourite programmes on TV whilst laying in the tent,” he says.

Kirsten Mitchell, who has camped with her children Jack (8) and Charley (6), did similar. “The first week we set up a sun tent over a sofa bed inside and spent two nights crammed in a double bed,” she says. “That was definitely not the most comfortable camp, so we moved into the summer house with mattresses for the following campout.” Now the family have a semi-permanent set-up in their garden to escape to.

Claudine Hall persuaded her husband and her children Amelia (12) and Alice (9) to sleep on their 14ft trampoline (picture below).
“We lined the trampoline with sheets, towels and blankets and slept out. My nose was freezing and I felt wet all over but looking up at the stars was lovely,” she says. 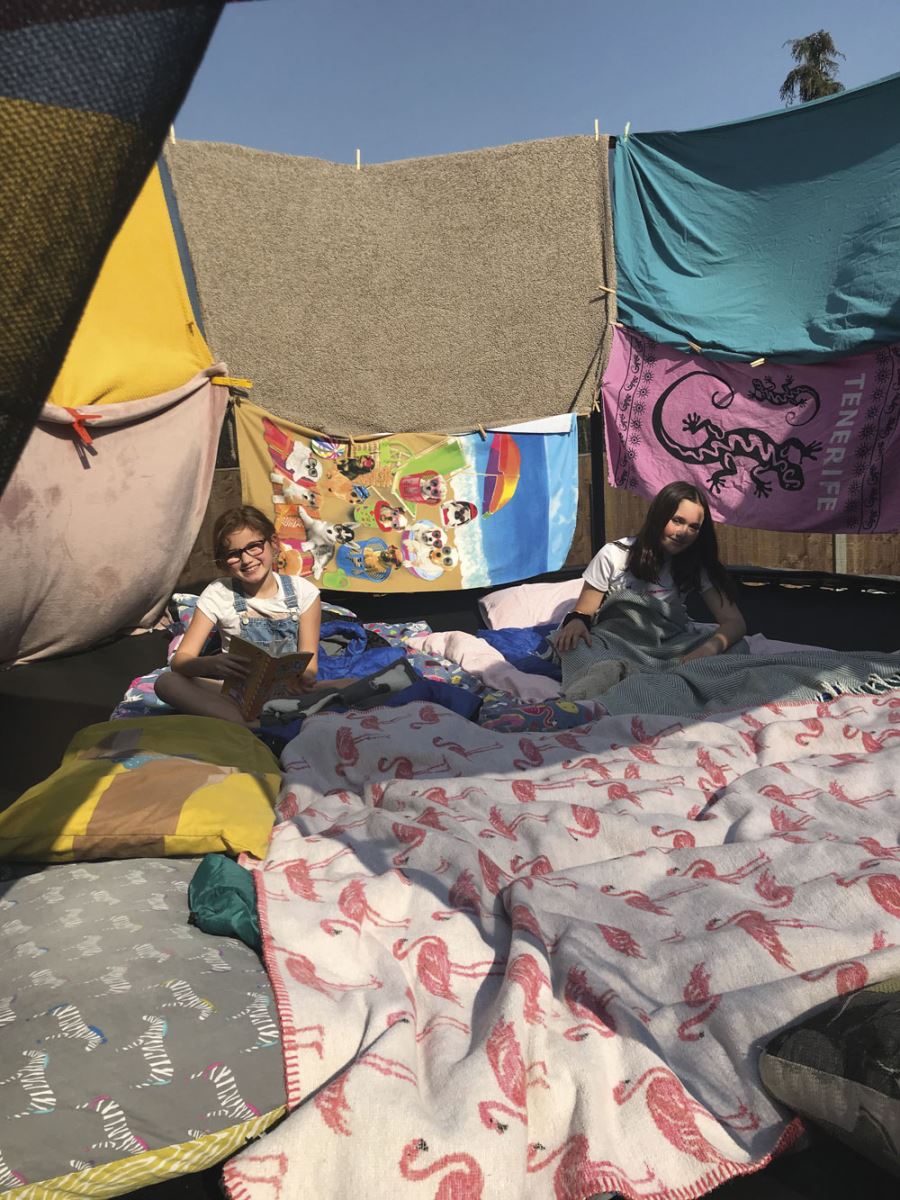 For others, it’s been the opportunity to test out their entire tent collection. For Camping magazine reader, Paul Magan, that includes a Coleman tent he won in a competition in the magazine.

“Myself, my partner Kathy and two children, Anais (12) and Harry (16) have spent most of the lockdown living in various tents in the garden swapping them every week or so to protect the grass,” he says. “We even built a little bushcraft area at the top of the garden.”

While regular campers have loved the opportunity to maintain some sense of normality by camping out at home, it has also encouraged a new breed of would-be campers… even previously reluctant ones.

Jill Williamson, her husband Stuart and children Adam (11) and Kate (9) camped in their back garden after borrowing a tent from a friend. They had been due to go on holiday to Menorca in the May half-term so still wanted to create a memorable break. “Taking inspiration from a Facebook group ‘Family Lockdown Tips & Ideas’, we decided to create a festival weekend in our back garden, which involved borrowing a tent from friends and a projector from next door to host an outdoor cinema,” says Jill. 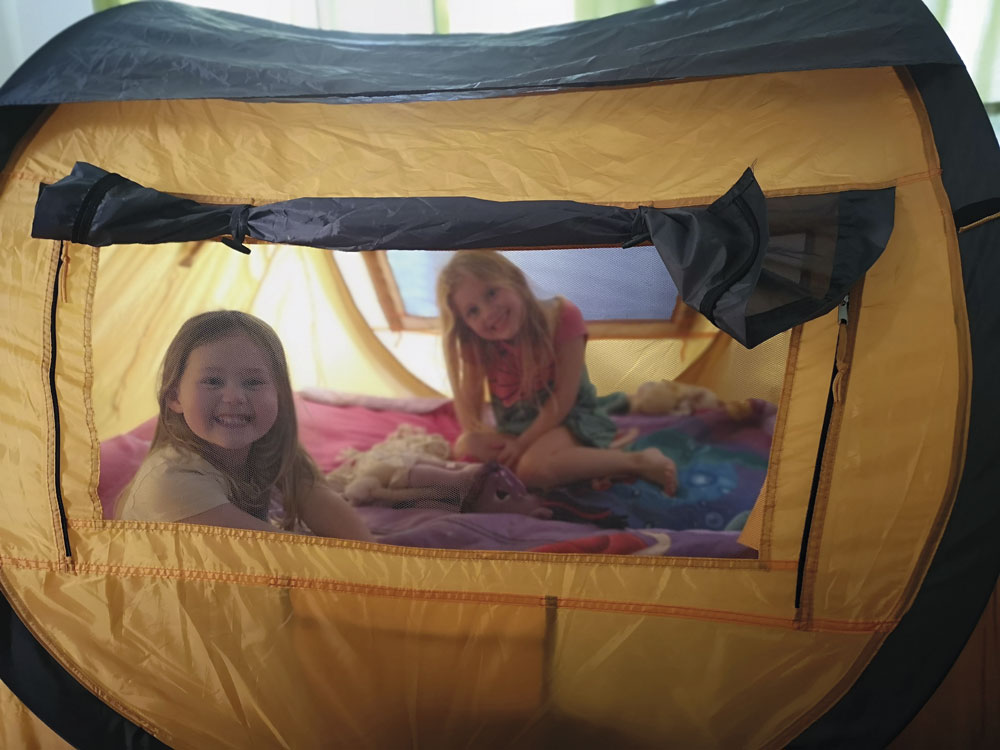 “The whole experience gave us all a much-needed boost and watching excited children collecting their festival lanyards, deciding where they were going to sleep, packing for the trip and loving an outdoor cinema experience was so brilliant to see after 10 weeks of highs and lows!”

Her campout certainly surprised some of Jill’s friends, who hadn’t been able to persuade her to camp before. “When I posted some photos on Facebook, one friend commented ‘who are you and what have you done with my friend?’” she laughs.

“Friends are excited that we now might be willing to go camping with them. We’ve not committed yet but as a family we are very sociable and we have missed people so much, so camping with them is feeling much more appealing to me now (sssh – don’t tell them!).”

As you read this it may well be that we are now able to plan our first proper camping trips. But no-one will forget the memories made and the escape that lockdown camping gave them. “In a time where all you were hearing was negative news this was something we could lose ourselves in,” says Jill.

Many have been dusting off and making use of their existing kit while adding a few small reminders to their collection. “We’ve got lots of tents already – a whole room full, in fact – but I’ve bought a lot of the Great British Campout merchandise,” says Gemma Hawtin who has camped in her garden every weekend of lockdown

Others have taken the chance to upgrade existing equipment. Retailer, Go Outdoors, which adopted the name Go Indoors during the lockdown, also embraced the home camping phenomenon by supporting the Great British Campout with its Managing Director Lee Bagnall and buyer Dave Addy even camping out in their own respective gardens.

The retailer says it saw a rise in demand for smaller tents that would better fit family gardens – as well as related products such as barbecues, seating, furniture and shelters and gazebos during the lockdown period.