10 Of The Best Tabletop Games For Camping 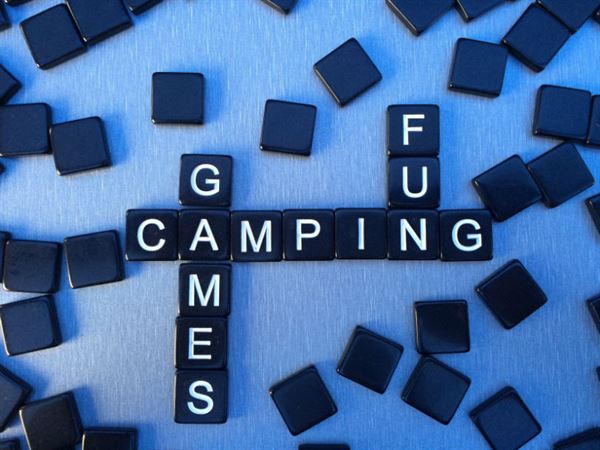 Camping with the kids can be so much fun when the sun is shining. You can play rounders, cricket and an almost endless list of outdoor games. But what do you do when the weather isn’t playing ball, pardon the pun.

Well instead of reaching for that battered copy of travel Monopoly, Heather Burman has some fun alternatives to keep all the family entertained if the weather is dicey.

HAPPY SALMON
£12.99
This is a great one for younger kids. You don’t have to sit around a table and can even stand up, if your tent allows. Here you have a collection of cards with phrases on like ‘Happy Salmon’ and ‘High 5’ etc. You read each card aloud until you find an opponent with the same one, you both then do the corresponding action for your card and can then both discard it from your pile. The winner is the one who gets rid of their cards first. It’s noisy, so not one for late at night on the campsite, but it’s lots of fun and packs up into a small-scale, salmon-shaped bag. Fin-tastic. 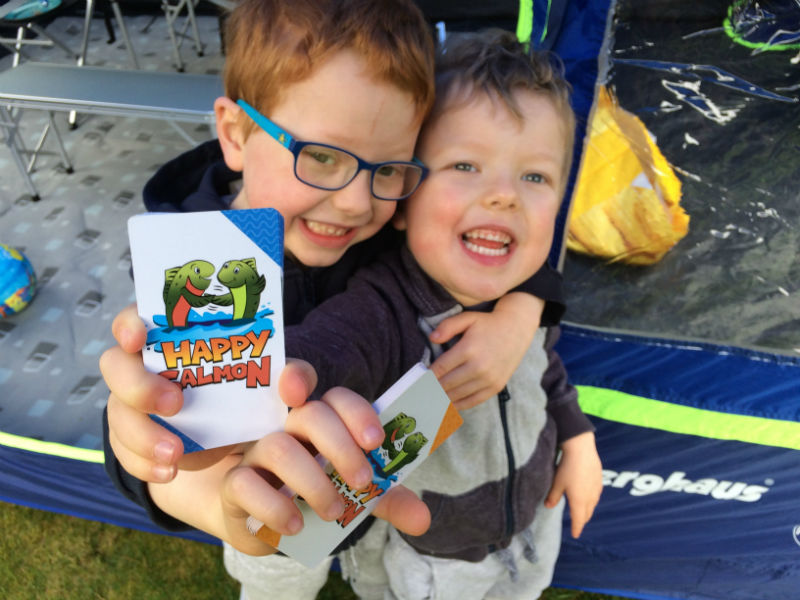 COBRA PAW
£14.99
Again this can be played without a table, anywhere in the tent. You roll the chunky dice to reveal two coloured symbols and then the frantic search begins to find a matching tile among a pile of domino-like pieces. It’s tougher than it sounds when the pressure is on. The winner is the first one to put their finger nearest to the centre of the tile. It won’t drive you as dotty as dominos though, it’s quick paced and even young children can get the hang of it pretty quickly. My top tip here is to ditch the box and pop into your own re-useable bag to save on space. 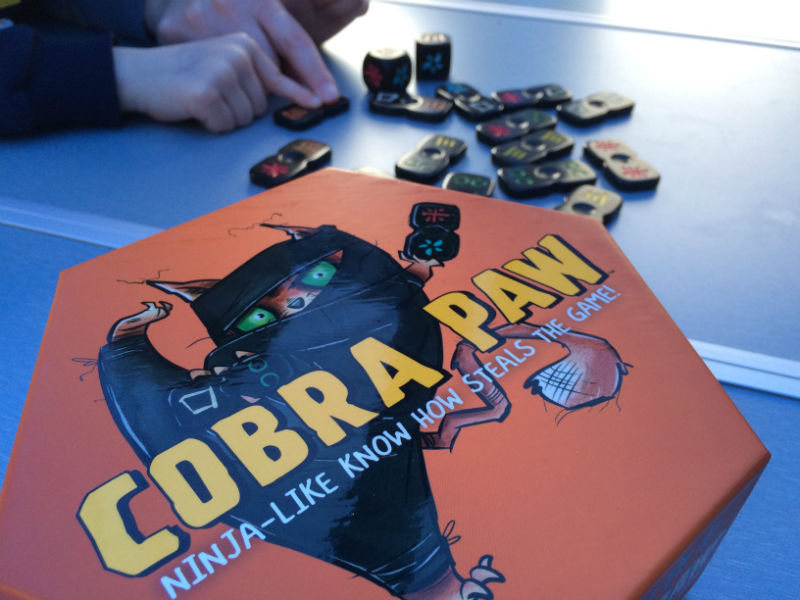 PUSH IT
£15
This is a super simple concept but it’s great fun. Basically the aim is to push or flick your counters closest to the Push It disc. It’s like a table-top version of bowls or curling, really. I know this sounds strange but trust me, it’s addictive and our family gets super competitive. Perhaps the greatest thing though is that it can be played on any flat (and relatively smooth) surface. The camping table, a picnic bench, etc. are all perfect. Just pop it in your pocket and you’ve always got entertainment on the go. 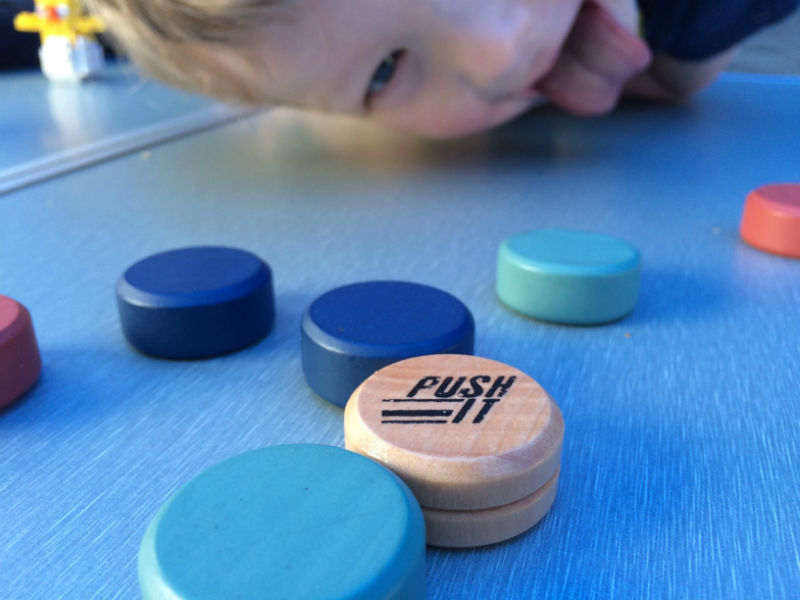 SUSHI GO
£12.49
A lovely game with beautifully illustrated cards for little and big kids. Young gamers will love the cartoony pictures while older players can get engrossed in the sushi swapping action to create the tastiest dishes. The aim is to make sets of types of sushi by choosing which cards to keep and which to pass to your fellow players. The action heats up faster than a wasabi dip as you all try get the highest scoring sashimi. 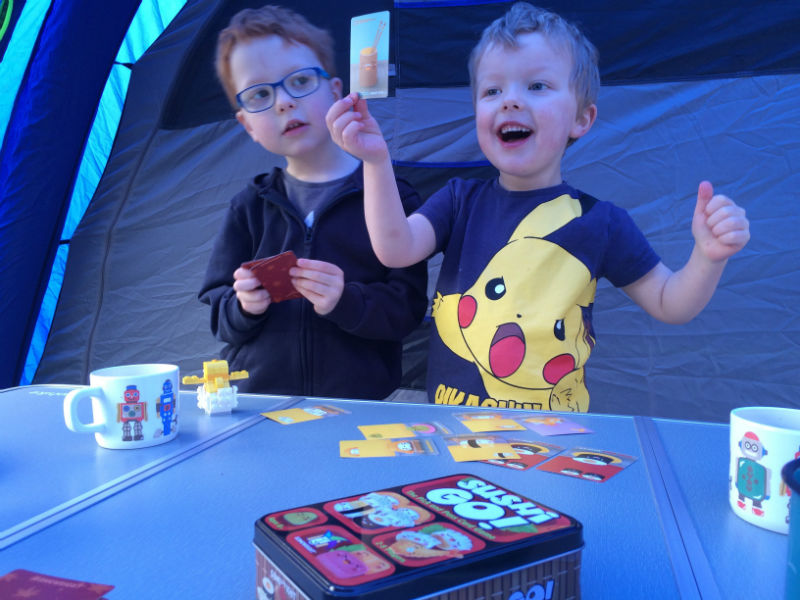 DOBBLE
£12.99
My little gamers just love Dobble and honestly so do I. The aim is to either get rid of your hand or win the most cards (depending on the version you’re playing) by matching symbols on the circular cards. The problem is, there are several symbols on your card and only one will match! There is a standard and junior edition but if you can try to get hold of Dobble Beach - the cards are waterproof, so perfect if there are any spills from those little campers. 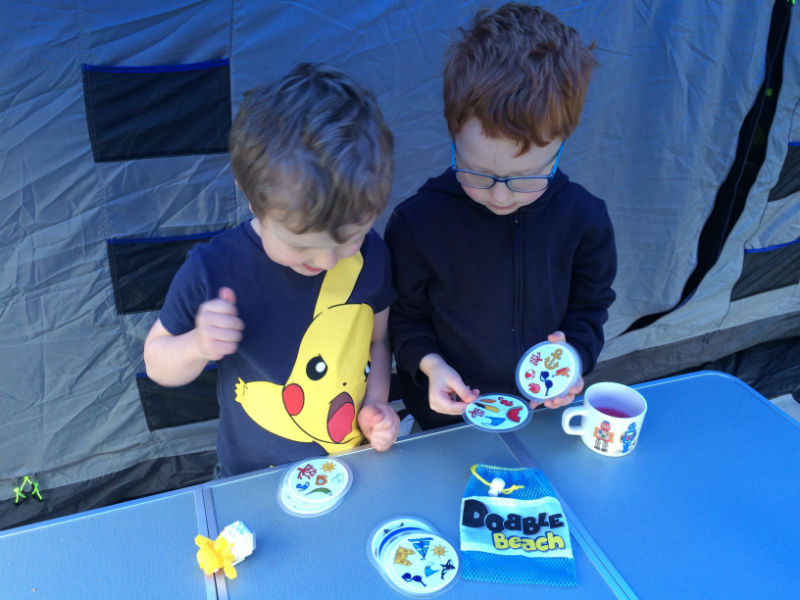 HIVE POCKET EDITION
£14.95
Bugs are normally the last thing you want in your tent but here the spiders, bees, ladybirds and grasshoppers in Hive Pocket Edition are welcome guests. This miniaturised version of the award-winning Hive sees two players attempting to surround their opponent’s queen bee with three of their own bugs. A little like chess, each critter has their own movement patterns and knowing when to use your beetle or soldier ant to clinch the winning move is no easy task. Definitely one for older kids, Hive Pocket Edition packs away nicely into a well-made pouch. 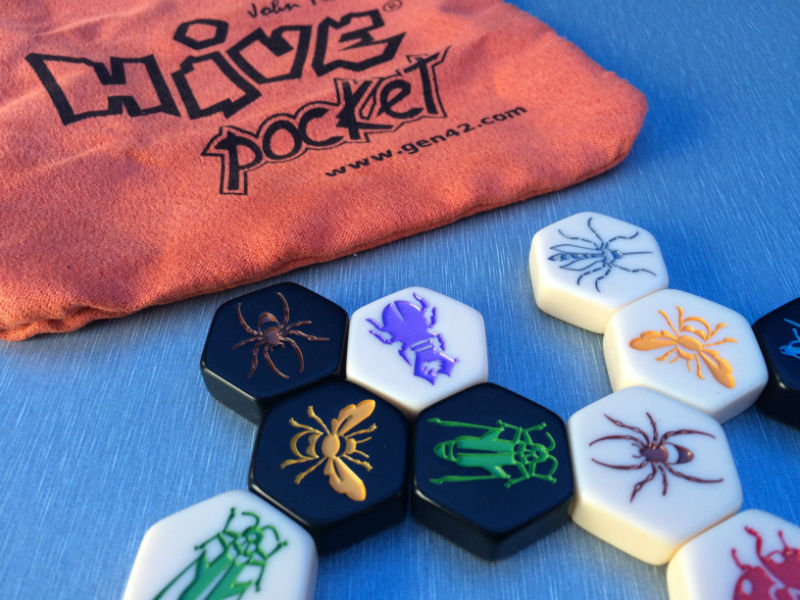 BANANAGRAMS
£15.99
Want the fun wordplay of Scrabble without the hassle of a board and without the panic of losing your letters under your camping mattress? Then Bananagrams is perfect for you. It’s a race for each player to complete their own grid of inter-connected words from a pool of tiles. The other bonus is it won’t drag on all night. Bananagrams packs away into a charming banana-shaped pouch and there are different versions to suit your mood. 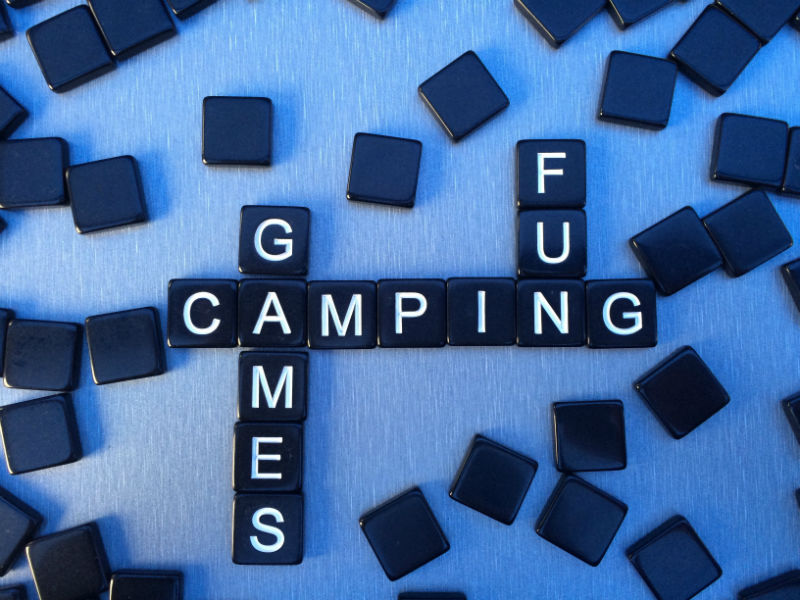 CODINCA
£14.99
You can often be limited for space under canvas, so any game that doesn’t take up a lot of room but offers plenty of replay value is a vital addition to our family trips. In Codinca you have a small grid of 16 chunky plastic tiles that take up about the same space as a typical hardback. Each player must complete their secret patterns by swapping two of the brightly coloured tiles or flipping them over. The beauty of Codinca is you’ll never have the same combination of patterns twice and it’s a real brain teaser as you try to work out how to complete your patterns. 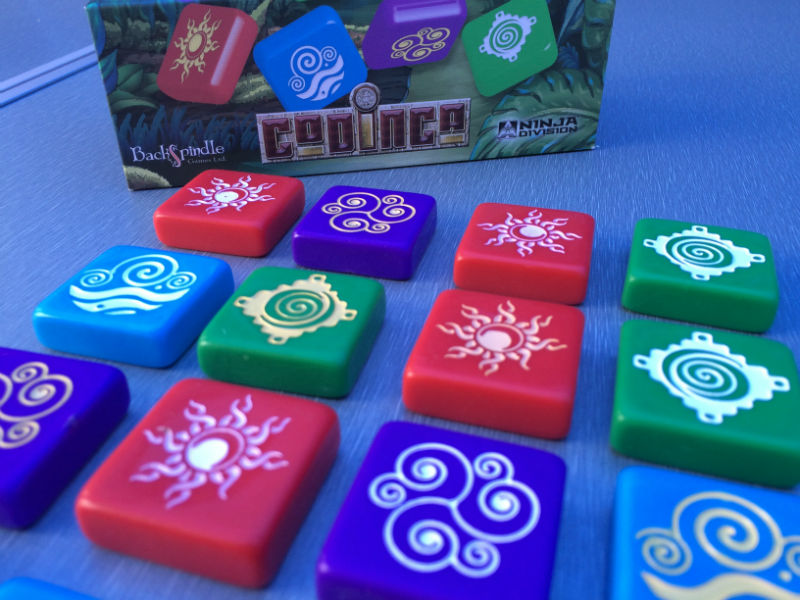 JUNGLE SPEED
£14.49
This is a little like a game of Snap but with the added fun of snatching a totem pole! Each player turns their cards over one by one in turn and you need to keep your eyes peeled for any matches. Once there are two matching cards, the two players become locked into a duel and the first one to grab the pole gets to offload their discards onto the loser. It’s fast, furious and definitely keeps you on your toes. 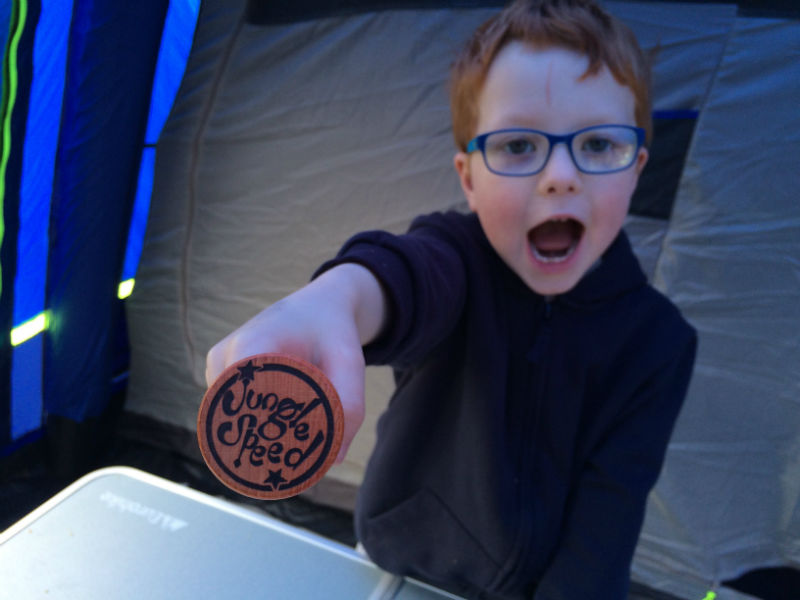 JAIPUR
£17.99
Take your mind off the terrible British weather with a trip to a busy market in the heat of an Indian summer. You are vying to become the Maharaja’s personal trader by getting the best deals for your wares - anything from jewels to spices. But the tricky part is knowing whether to go for big deals on expensive goods or sell a load of cheap stuff, Del-Boy style. This is a two player game, so one really for when the children have gone to bed and the grown ups can play. 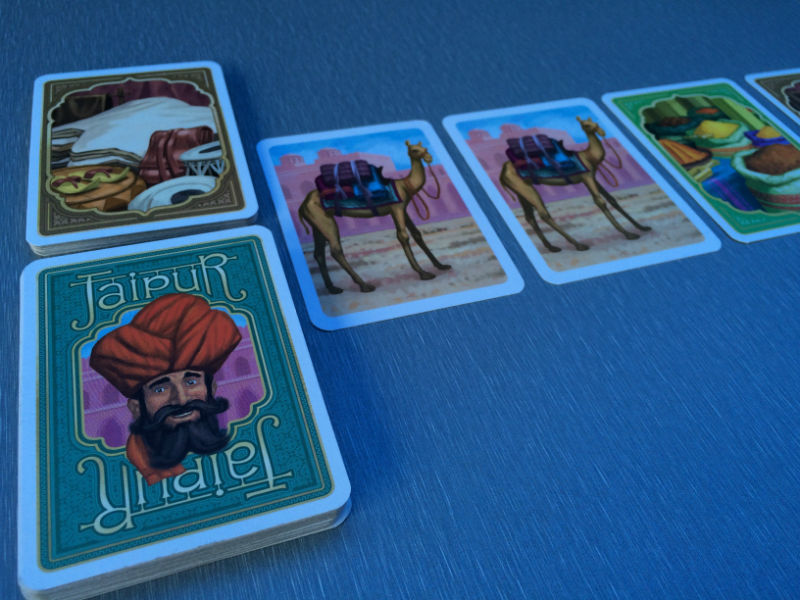