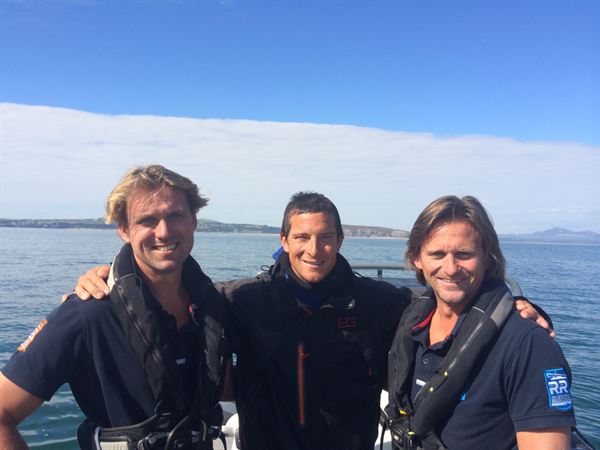 The 41-year-old star, who’s conquered a world of extreme locations on and off screen, singled out the North Wales national park’s terrain and world class outdoor attractions as a paradise for adrenaline sports fans.

Speaking as official Ambassador for the Wales 2016 Year of Adventure campaign, he also praised the life-changing benefits of activities such as high-velocity zip lining, cave jumping, white water rafting and open-sea RIB riding, all of which are hosted in the area.

He said: “When you take people outside and get them to have a few adventures, the skills they learn are positivity, courage, determination and resourcefulness. Taking part in activities is about empowering people and we see people’s confidence and pride grow."

He added: “I’ve had amazing experiences in Wales with my Survival Academy; the beautiful, rugged and wild terrain of Snowdonia lends itself so well to so many activities and adventures.”

He said: “Snowdon is an international icon and encapsulates the spirit of Wales and the Welsh people. It’s a place where dreams are hatched and challenges fulfilled. I’m delighted to be an ambassador… Wales is where the adventure starts in 2016.”

Bear, who has a home on Saint Tudwal’s Island West, off the coast of Abersoch, was backed in his support of Snowdonia as a global outdoor pursuits destination by Clwyd South AM and Deputy Minister for Culture, Sport and Tourism, Ken Skates.

Mr Skates said: “The Year of Adventure will  build on world-first attractions, such as the biggest inland surfing centre on the planet at Surf Snowdonia and the fastest zip wire adventure on earth at Zip World, both of which have been supported by Welsh Government.”

Wales 2016 Year of Adventure attractions include:

The 8km of zip wires strung over quarries in Blaenau Ffestiniog make this the largest zip zone in the world. Thrill-seekers can travel at speeds of more than 100mph – while enjoying breath taking bird’s eye views of Snowdonia.

Three enormous subterranean trampolines in the caverns of the Llechwedd Slate Mines.

An adjustable dam controls water flow to this section of the River Tryweryn near Bala, giving it world-class white water all year round for canoeists and rafters.

These Rigid Inflatable Boats (RIBs) excursions in the Irish Sea around wildlife-rich Anglesey in afford some of the best seal watching opportunities in Britain.

Soak up survival skills and learn to thrive in the wild with a course at the Bear Grylls Survival Academy on the Llyn Peninsular.