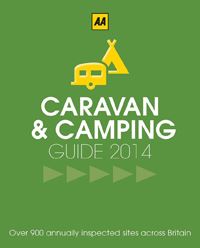 The AA have announced the winners of its Caravan and Camping Awards 2014 with the publication of the latest campsite guide, which is now in its 46th year.

The AA Caravan and Camping Guide 2014 details over 900 inspected and independently graded campsites across England, Scotland, Wales, Northern Ireland and the Republic of Ireland. Campsites are graded on factors such as the quality of touring pitches, facilities and hospitality on a one to five pennants grading system. For 2014, the top parks which score 90% and above will be awarded gold pennants.

Each entry within the guide includes location, ratings, contact details, directions, prices, facilities, opening times and a full description to help readers select the right site for their needs.

The winners of the 2014 awards, which are also included in the guide, are as follows:

The Roger Almond Most Improved Campsite

Small Campsite of the Year

The AA Regional Campsites of the Year 2014


The AA Caravan and Camping Guide is available from The AA Shop for £9.99 and as an app for iPhone, iPad and Android.