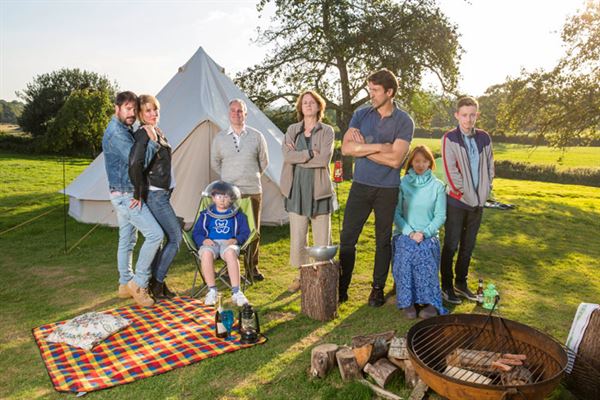 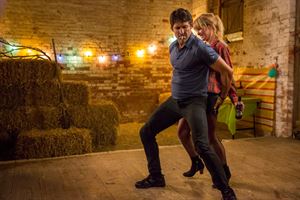 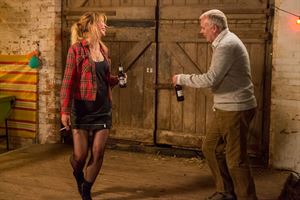 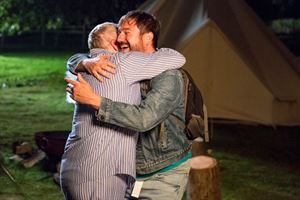 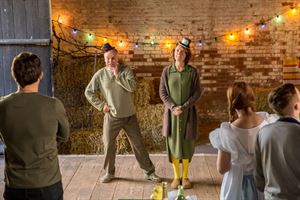 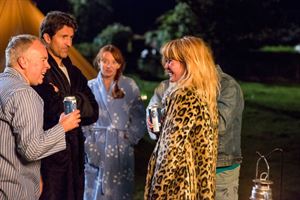 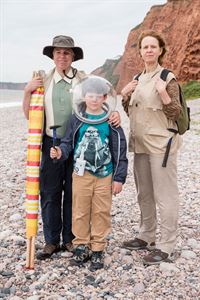 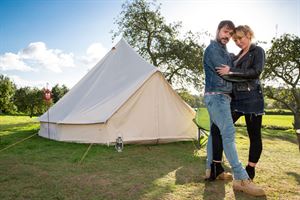 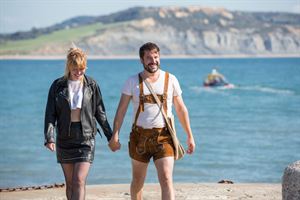 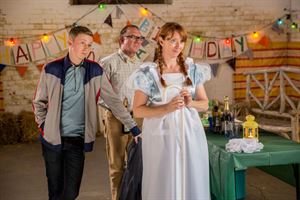 A new sitcom based around the camping trip from hell is about to pitch up on the small screen.

Camping is the latest dark comedy from Julia Davis – the creator of the award – winning Nighty Night and Hunderby.

She writes, directs and stars in this tale of a couples’ camping trip that’s less about toasting marshmallows and more about simmering resentments, as a stuffy middle-class birthday break goes badly wrong.

Planned to a fault by the controlling Fiona (Vicki Pepperdine), the trip is supposed to be a 50th birthday celebration for her husband Robin (Steve Pemberton of League of Gentlemen and Benidorm), but it’s the recently separated Tom (Rufus Jones) and his new girlfriend Fay (Davis) who crash the party and grab the spotlight, prompting things to turn worryingly debauched and deranged.

Read what the show’s stars have to say about the show and their own experiences of camping:

So what’s Camping all about?
It’s about a group of couples going away for someone’s 50th birthday, and one guy unexpectedly arrives with his new girlfriend, which sort of messes up the whole holiday and it kind of descends into a bit of a nightmare by the end.

And what inspired you to write it? Have you been on any horrendous camping trips in the past?
No, that’s what’s weird. I went on a really nice one, but I think while I was there I kept thinking of all the things that could go wrong.

Who do you play in the series?
She’s called Fay and she’s very flaky. She just wants to have a good time, really, with whoever. She turns up with one guy, but if that’s not working out she’ll just kind of move on. She’s, I suppose, not horrendous, but not particularly moral.

Do you think the series says anything about the English middle class and their holiday habits?
Possibly – I think that it particularly will connect with some people. Especially the character Vicki Pepperdine plays [Fiona] – who’s addicted to keeping everything on schedule at the expense of actually enjoying the holiday – I think that is quite a British thing.

What was it like shooting the series? Did you have to contend with any terrible weather?
No, I was honestly so lucky, because we went down to do the recce and it was absolutely pissing down in the week leading up to it. And I just thought, “Oh my God, why couldn’t we shoot this abroad? This is going to be a nightmare.” Then literally, it was six weeks of sun, so that was really lucky. Then, also, for me, as a first-time director, I was just very lucky with the crew. They were just sort of nonmacho, really nice blokes, who kind of helped the whole thing. This makes it all sound like a love-in, but it was really good being with actors who are friends. It was not a horrifically daunting thing to do and I imagine if your debut directing thing was with some huge stars, it would be quite scary.

Tell us about Camping
It’s about three couples who, every year, go on a camping trip. They’re very polite, suburban, middle-class couples who bring their kids out into the countryside and have a lovely sedate, quiet holiday. Except this year, my character, Tom, has an enormous mid-life crisis and he has left his wife and kids and brought along his new squeeze, Fay, who is played by Julia. This kind of blows a hole in the polite, middle-class atmosphere and by the end of it we’re all completely screwed up.

What do you think the show says about middle class holiday-making habits?
It’s about how middle class English couples interact and exist, and there are these long-standing frustrations and difficulties within marriages, which often become a lot worse on holiday and they’re often a lot worse on camping holidays as well. Never let it be said that camping holidays are relaxing – the Primus stove is designed to destroy marriages.

How would you describe your character?
At heart Tom is actually a very polite, very straight guy, but he’s had a cataclysmic mid-life crisis. He’s left his wife and children in a moment of misguided abandon and he’s fallen into bed with Fay, who is everything that his ex-wife wasn’t. She’s sexy, she’s a bit of a hippy and she introduces Tom to all of these things that his polite life has never involved, like healing crystals and past-life regression. Tom thinks that all his boats have come in at once, except, like all mid-life crises, they are often hiding something more fundamental, and Tom can’t really run away from his past. Tom’s my age – he’s late 30s – and like a lot of men in their late 30s having a mid-life crisis, he’s doing a lot of shopping in Topshop and Zara, and the problem with wearing Topshop clothes in your late 30s is you look like quite a significant sex offender. Tom thinks he’s reborn and Fay is the beautiful midwife to his rebirth, but his friends are looking on in horror, really.

How would you describe your character?
My character’s called Robin and the camping trip is to celebrate his 50th birthday. He has arrived with his wife Fiona and their little son Archie, and he’s very positive in spite of the fact he’s very put-upon. He’s the most browbeaten, hen-pecked, picked-on character, but he’s very good natured. He’s seemingly trapped in this awful marriage, but he doesn’t ever get down about it, which is lovely.

Did you go camping as a child?
My only real experience was with the Cubs. We went to Scotland and camped by the river Annan and – not to stereotype – but a load of Scottish drunks came and terrorised us in our tents. We were just quaking in our boots, they were really hurling abuse. It was probably only about half nine, we’d done our campfire singsong, and we were quite terrified. I think there is something about the fact that there is only this wafer-thin piece of canvas between you and whatever’s on the other side. It’s a classic horror thing as well – things like The Blair Witch Project and Nuts in May, I don’t think there’s ever been a really happy camping film that I can think of – maybe Carry on Camping.

This is a bit of a different holiday vibe to Benidorm. How did shooting in the sun compare to rural England?
It was glorious, we were going to these beautiful locations like Lyme Regis and Budleigh [for Camping]. We were on the beach, sitting in the sun, with a lovely group of actors and crew, having these really funny scenes to do, so they were really similar actually. But Benidorm’s now in its ninth series, and I don’t know if the characters in Camping would ever go back on holiday with each other after what happened. But it was a very similar vibe, it’s lovely to work outdoors in the sun, it puts everyone in a good mood.