European beach fishing championship is in the bag 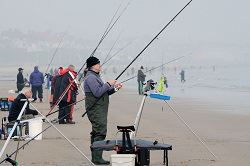 The campsite, a member of the exclusive Premier Parks group, is the venue for the European Open Beach Championship (EOBC) to be held 7-9 March 2014.

About 1,000 anglers from a dozen countries will congregate on the site for the championship, billed as the world’s largest three-day beach angling event. It is being held here for the second time, the first being in 2013.

Sand le Mere overlooks Tunstall Beach, a long stretch of North Sea coast, where the daily weigh-ins will be held to determine the winning contestants.

James Flynn, general manager at Sand le Mere, welcomes the news: "We have spent over £5m on new facilities, so we are delighted to attract and retain such a prestigious event.

"Sand le Mere is the perfect choice for Europe’s best anglers. We have comfortable accommodation, evening entertainment, and a restaurant and bars serving hot food and drinks – and the whole team will be crossing our fingers that the weather this year will be better than last."

Sand Le Mere is one of the leading family holiday destinations on the East Yorkshire coast, with static caravans, luxury lodges, and touring pitches for motorhomes, caravans and campers.
Find Russ on Google+