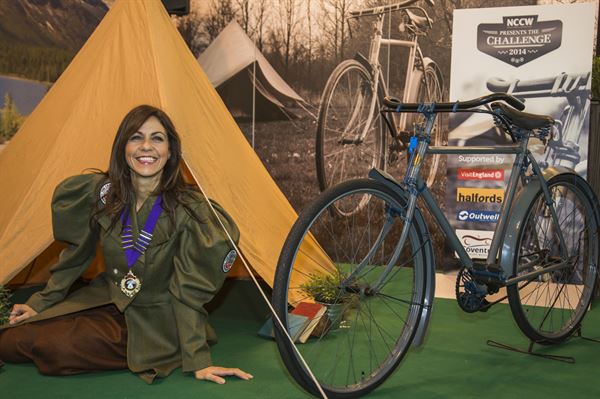 The Camping and Caravanning Club has revealed route details for its cycle-camping challenge.

A team will start at Wantage in Oxfordshire, the site of the Club’s inaugural meeting back in 1901 ride up the country, and head north through England, pitching up at campsites along the way.

They will pass through towns, cities and destinations including Cambridge, Peterborough, Nottingham, Chatsworth Park in the Peak District, Glossop, Huddersfield and Keighley before heading to their final destination.

Television presenter and first female Club President, Julia Bradbury will lead the riders over the finishing line at the Club’s Scarborough campsite on Friday, 30 May.

The Club’s founding member, Thomas Hiram-Holding was himself a cycle-camper.

All of the riders taking part in the challenge will wear traditional cycling clothing throughout the six days.

The six day cycle-camp challenge will take place during National Camping and Caravanning Week (Monday 26 May to Sunday 1 June).

The Club is raising money for Sustrans which is the UK’s leading charity enabling people to travel by foot, bike or public transport.

Further detailed information on the route and the Club Challenge team can be found on the Club’s new dedicated challenge website.

Robert Louden MBE, the Club’s Director General, said: “Cycle-camping is a huge part of our heritage so it seemed only fitting that in the Year of the Bike, we really set out to complete a challenge in the memory of our founding member, Thomas Hiram-Holding."