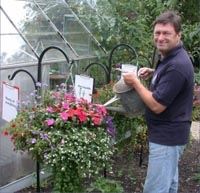 The eight-part BBC1 series starting on Wednesday (10 October) looks at wildlife, flora and fauna in different habitats across the nation.

The wilderness episode includes a regional focus on volunteer work.

Matt Baker, of Blue Peter fame, introduces viewers in Cumbria and the North East to the raft of recovery operations currently in place on and around the lake.

Problems surrounding the Lake District’s fourth largest stretch of water – which has seen wildlife threatened by water pollution and silting – will be profiled, along with pioneering solutions, on 31 October.

Producer Chris Jackson said he had been impressed by both restoration work and local people who were lending a hand in protecting their heritage.

He added: “Bassenthwaite appealed because of the sheer beauty of the landscape, the scale of the restoration project and the opportunities for volunteers to get involved.”

John Pinder, manager of Bassenthwaite Lake Restoration Programme, welcomed the high-profile recognition, adding that it was a terrific boost to the long-running campaign to restore water quality to its clear, pre-war state.

He said: “An important part of our work is trying to protect vitally important wildlife in and around Bassenthwaite, including endangered Ice Age vendace fish and our world-famous ospreys.

“I think a lot of people will be surprised by how much is being done on many different fronts, including working with farmers and hoteliers to cut fertiliser and waste water use.”