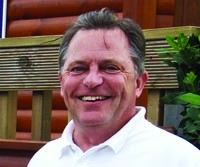 MIKE Wills is about to celebrate 25 years as managing director of Pathfinder Park Homes, after starting at what was then Pathfinder Workshops, part of Ten Wide Limited, in 1983.

After six months he was asked by the owners, Tony and Gerry Horton, to take over the management of the Workshops and in 1985 Pathfinder Workshops and Ten Wide Limited merged to form Pathfinder Park Homes, which is now one of the UK leading park home manufacturers.

Mike said: “It has been an eventful 25 years and I am very proud to have grown the business to where it is today, alongside a committed and hard working team.”

Mike added that the changes in the industry had been remarkable over the last quarter century.

He said: “When I was at night school in Exeter, studying design and drawing courses, all the park and holiday home models were designed with pen and paper. We only had one computer in the office, which was used exclusively for accounts, so I used to draw each model to the specific needs of every customer, who simply bought an empty shell. There were no interior design decisions to make.

“In the early to mid-nineties that all changed,” he continued. “Now we have reams of choices for work surfaces, bathroom fittings, dining areas, curtain fabrics, carpets and flooring. We still individually craft every one of our homes to suit each of our customers’ requirements, but this is based on a that large selection of standard models we have at any one time.”

The company will host an open weekend, 10am until 4pm, October 25-26, at the company’s HQ near Newton Abbot in Devon

Visitors will be able to tour the workshops, see homes being built, browse the company’s selection of fixtures, fittings and fabrics, view a luxury lodge and discuss their requirements with staff.

* This article was first published in the October 2008 issuer of Park & Holiday Homes magazine.