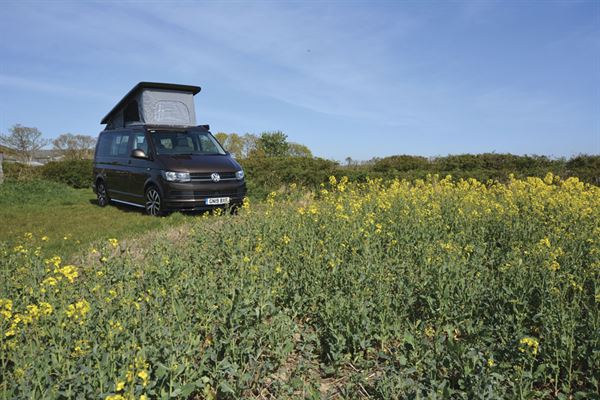 In the July 2020 issue of What Motorhome, the magazine nominated a selection of its best new campervans and motorhomes. Best new campervan goes to a model which won the heart of editor Peter Vaughan, the CMC HemBil Urban...

Of all the various sectors of the campervan and motorhome market, the compact campervan one – especially VW campers – has to be one of the most crowded, and the hardest in which to stand out. There are some very good, long-established players and, not only that, but competition from Volkswagen itself.

Despite that, something struck a chord with me the moment I clapped eyes on the Chestnut Brown demo model of CMC’s HemBil Urban as it made its debut under the show lights of the NEC last October. Maybe, it was the removable kitchen pod that grabbed my attention, as this seemed to build on the concept of its Drift sister model’s swing-out galley with a simpler (and better) way of cooking outside.

The Urban impressed further when it came to Warners Towers, not to feature in these pages but in our sister magazine, Campervan. Editor, Geneve Brand, came back from a weekend in Norfolk mightily impressed and, knowing that I was looking to change my decade-old T5 California SE for something newer, suggested I take a closer look.

“I can’t afford it”, I said, before adding “And it’s brown!” But she was right, this isn’t just another VW camper. For one thing, it’s now the new editorial wheels…

Of course, the pedigree helped. CMC has been converting VW vans into campers since 1988 and even its early models (some of which I tested personally) impressed. It’s also one of the few converters recognised by Volkswagen and, as the original importer of Reimo conversion components into the UK, it installs these top-quality TÜV-tested parts into its campervans.

CMC’s HemBil range is also designed to work primarily as a family-friendly vehicle all week, while also doubling as practical camping accommodation at the weekend. As with a lot of T5/T6 owners, our camper is a daily driver (both on the school run and taking my wife to work), so that’s important. That the Urban has one of the widest rear seats on the market – and one of the very few which can genuinely take three normal-sized humans (or even three child car seats) – is also big plus.

Another key aspect is that the seat is a fully crash-tested Variotech 3000 unit from Reimo. It slides along tracking that’s bonded to the VW floor.

Of course, safety is paramount in a family vehicle and this German unit is the best in the market, but it also adds massively to the camper’s versatility. Slide right up to where the cooker unit juts out and you have a huge boot area in the back, or slide it back for maximum floor space on site. 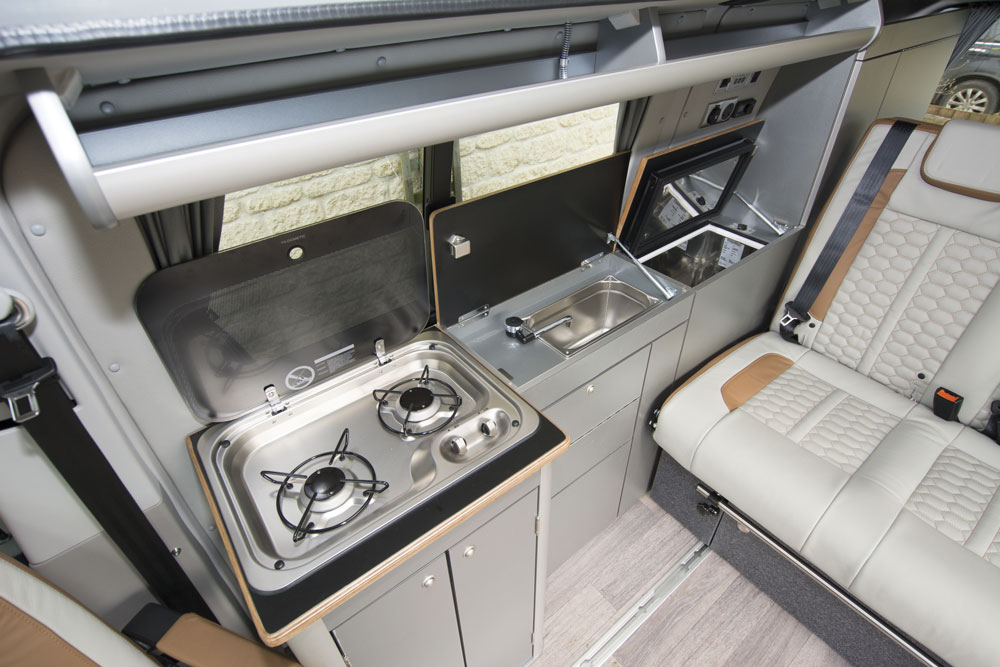 Better still, the Variotech seat makes into a bed very simply and quickly – and, as the seat is so much wider than in most other VWs, the bed is not the usual tight squeeze for two adults more used to a super king size bed at home! At 1.90m by 1.35m, the bed here is generous by camper standards and it’s completely flat, too.

At night, curtains with rails top and bottom provide effective blackout and there’s a good range of LED lighting, although none of it is dimmable. Curtains around the cab attach neatly with press studs.

The pop-top roof is another top-quality Reimo fitment and comes with the option of an upper bed. There’s plenty of ventilation up top, with a flyscreened panel on either side, plus a window at the front and a directional light. Another option is the Open Sky roof canvas, which can be completely unzipped for the ultimate in bringing the outdoors in. Perfect for the Côte d’Azur!

When you’re enjoying good weather, it’s great to cook outside, too, and that’s where one of the Urban’s neatest features comes in. The section of the galley just behind the driver’s seat is a self-contained pod that’s bolted to the floor. Just undo the fixings and it lifts straight out – and it’s not too heavy for one person to manage. Now you can cook those bacon sarnies without filling the campervan with food smells… 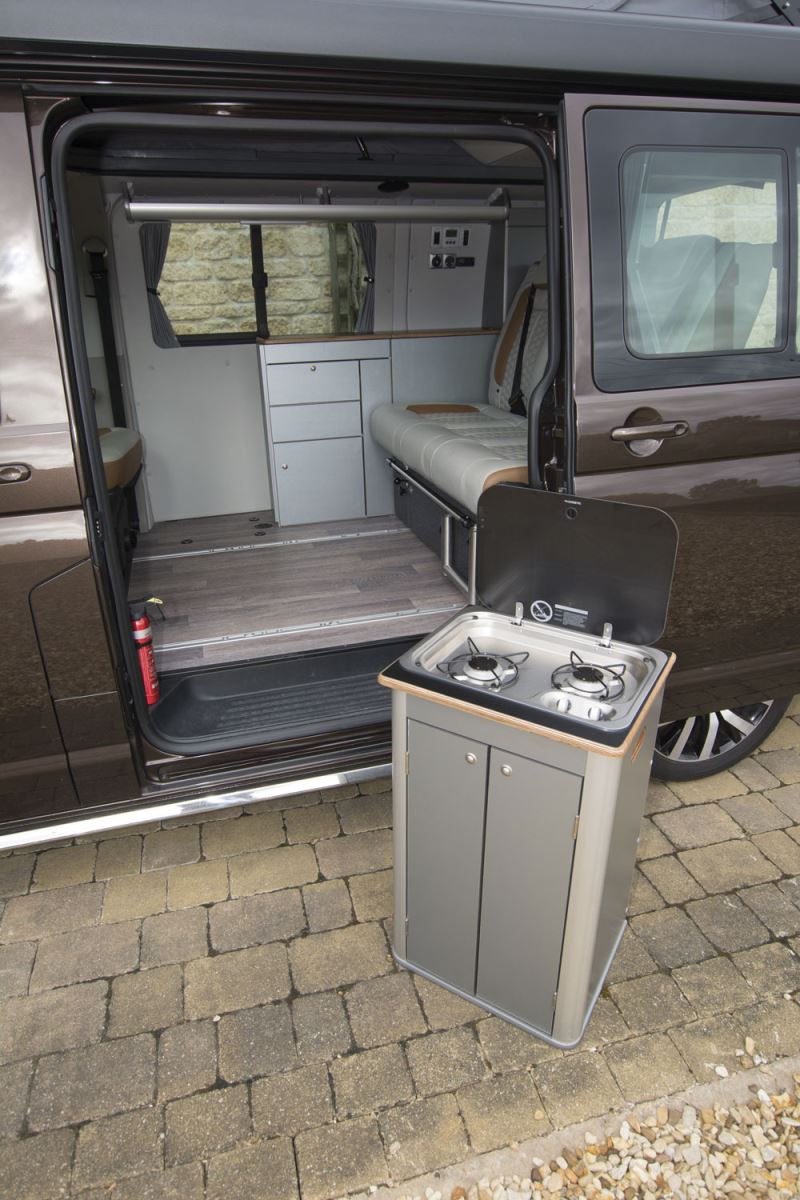 The rest of the kitchen is practical, too, with a surprisingly useful amount of storage considering that this is a very slimline unit (to allow for the wide seat). There’s a small sink, served by a pair of inboard 12-litre water containers, while the 20-litre top-loading fridge will hold more than you might think. And more storage can be found in the huge under-seat drawer. With CMC’s decades of experience, everything is very well finished, too.

Of course, in a small campervan like this, every detail matters and another novelty is the storage of the table on the inside of the sliding door. Its leg goes in the aforementioned drawer and it attaches to a fixing on the front of the seat base, while you can position it lengthways or across the camper, or even swing it out through the open door as a sort of serving station for al fresco dining.

You might think that all this would come with a hefty price tag but, actually, the Urban starts at a competitive £46,950 in Smart Line spec with the 108bhp (110PS) engine and five-speed manual gearbox.

Most customers, though, will surely upgrade to the Comfort version, which is priced from £54,950. This model is based on a T30 Kombi Highline version of the Transporter and comes with adaptive cruise control, body-coloured bumpers and mirrors, front foglamps with cornering function, cab carpet, front and rear parking sensors, a Category 1 alarm, Climatic air-conditioning, heated windscreen, privacy glass, automatic headlights and wipers, alloy wheels and more. 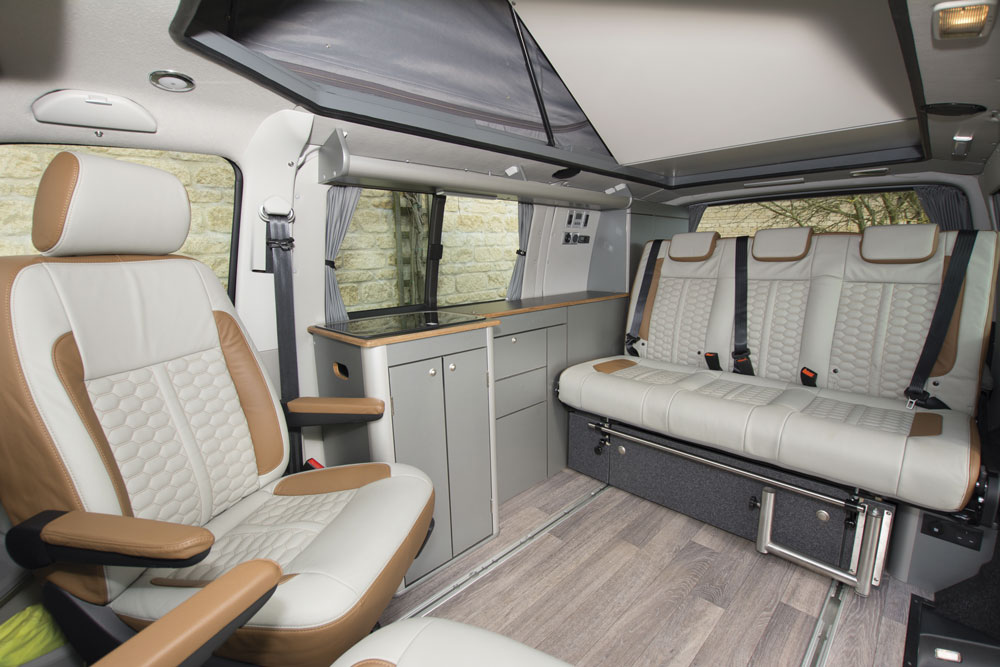 The Comfort spec also adds some home comforts such as additional lighting and power points, and Eberspächer diesel-fired blown-air heating.

You can, of course, add plenty more, both from Volkswagen and the CMC options list, to build a camper that’s perfect for your tastes. Key features on our example are the beautiful leather trim, the 18in alloys, lowered suspension and the solar panel (so we should hardly ever need a hook-up).

It all adds up to a very impressive camper, one good enough to make your Editor (with nearly 40 years’ motorhoming experience) put his hand in his pocket. And if it’s good enough for me, it’s definitely good enough to win this award…

Read our review of the CMC HemBil Urban here