If having five (or more) travel seats that can accommodate adults and child seats is essential for you, then the Urban has to be on your shortlist, without a doubt. Likewise, if you want a big, comfy bed, check it out. Although the side kitchen is narrow, meaning overall storage space is limited, it’s certainly adequate and the removable cooking unit makes it a very practical camper that’s also an ideal daily runner. 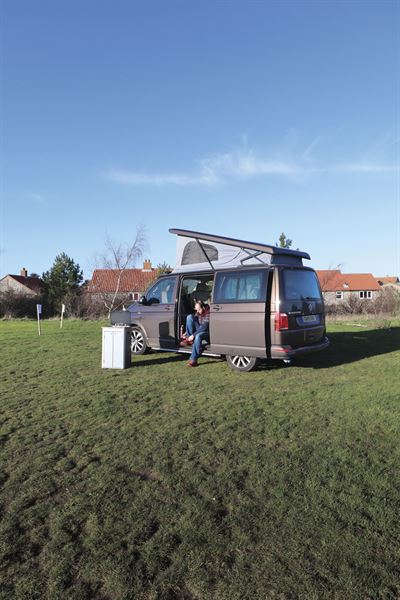 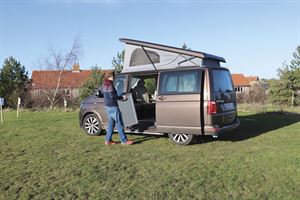 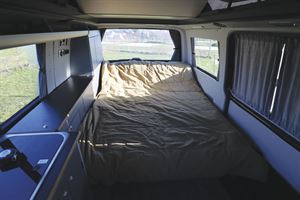 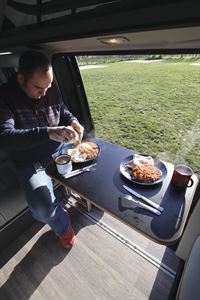 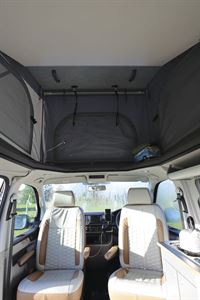 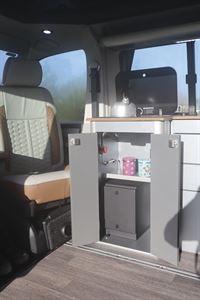 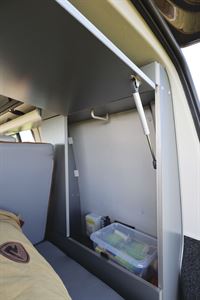 I always cite the main reason for not owning a pop-top campervan myself is the fact that they’re cold in winter, and I like to camp all year round. It stands to reason because pop-tops are made of canvas, so you’re essentially strapping a tent to the roof! But I like to base my opinions on fact so, when the opportunity arose to test the HemBil Urban in mid-January, I jumped at the chance. My husband, Steve, and I spent a weekend in July in the sibling HemBil Drift (see the October issue), which we absolutely loved, so we were keen to see how the latest addition to the HemBil family stacked up.

The HemBil range is built by CMC (Concept Multi-Car) Reimo in Kent; a company that’s been building campervans since 1988 and one of a handful of brands in the UK that’s accredited by Volkswagen. The HemBil range is now four-strong and all are VW T6.1-based, except the Escape, which will also be available on the Ford Transit Custom and the latest Renault Trafic later this year.

The Urban we tested is a 2019-plate VW T6, so bear in mind that any orders taken now, and going forward, will be based on the latest VW T6.1, which looks aesthetically different on the outside and the driver can expect a few extra bells and whistles – like adaptive cruise control and side wind assist – but, otherwise, it’s much the same.

As we hit the road on a dark, windy and very cold Friday evening (destination: the north Norfolk coast), we were reminded why we loved the HemBil Drift so much. Likewise, the driving position in the Urban is nice and high – which I like, being a wee 5ft 1in tall – and visibility is good through the rear view mirror and side windows (not true of all T6 campers).

The driver seat goes far enough back for 6ft 1in Steve to drive (again, not the case with all conversions), while he could also sit comfortably in the passenger seat without his knees wedged in the glovebox. This Urban also has the optional leather upholstery (price from £2,500), which is very beautiful and soft to the touch. With matching armrests, the ride feels luxurious. The test vehicle had the 148bhp DSG engine, which has a seven-speed automatic gearbox. It’s a breeze to drive and as smooth as silk; stick it in ‘sport’ mode and it rockets along, too.

Everything else in the cab is of fairly standard VW Highline fettle. In the middle of the dash there’s a multifunctional display screen and DAB radio, and you get a multifunctional leather steering wheel, too. There’s a USB port in the glovebox and a 12V socket in a cubby below the radio, which is handy for putting your phone, etc. This Urban also benefits from having CMC’s Motorhome Comfort Pack, which adds things like cab air-con, cruise control, heated windscreen and wing mirrors, cornering fog lights, and front and rear parking sensors.

However, as I proceeded to lose myself in the pitch black of the East Anglian fens, thanks to Google Maps (on my phone) concluding that following potholed farm tracks for miles on end was the best way to reach the coast, I was reminded that almost everything else of use, such as sat-nav (£1,320) and heated cab seats (£366) are optional extras with VW.

Speaking to Sam Shortland of CMC Reimo, I was interested to learn that the company’s primary aim is to create everyday vehicles that are practical and user-friendly; the campervan element is almost secondary, which is unusual, given that the conversion is also second to none. Taking this unique approach means that the HemBil range will appeal to buyers who primarily need a family-friendly vehicle during the week that will double as a campervan at the weekend, and the Urban certainly fits that bill.

Sam jokes that he develops campervans to accommodate the amount of children he has, which is now up to three! As a result, the bench seat is wide enough to take three child seats, or three average-sized adults. A small criticism we had of the similar HemBil Drift is that, although the bench does offer three seatbelts, it’s really only wide enough to comfortably accommodate three children/lanky teenagers.

In the Urban, however, this is resolved by having a wider bench. It’s still a range-topping Reimo Variotech 3000 – which it makes in several sizes – and here the seat cushion is a tad over 1.25m wide while the back cushion is 1.32m wide. As the bench also provides sleeping quarters, it transforms into a humongous bed that’s 1.90m long. That’s big for a VW T6 campervan.

Of course, the price you pay for having such a wide travel bench and bed is that the side kitchen is narrow – but still adequate. To the front of the ’van, behind the driver’s seat (which swivels) is a removable kitchen pod that houses a two-burner gas hob, with some storage below, and a compartment for a 907 Campingaz gas cylinder.

The unit is bolted to the floor and it’s easy enough to unscrew these (using just your hands) and lift the whole thing out. That means you can cook outside, or you can leave the unit in the garage when using the Urban as a car.

Next to the cooker unit, concealed under the worktop with a lift-up lid, is a neat little sink and tap, with electric pump, and below the sink are two 12-litre plastic water containers. You only use one container at a time and they’re easy to swap over. Being small and lightweight, it’s easy to replenish your water supply, wherever you are. And if you’re wondering where the fridge is, it’s next to the sink at the end of the workspace. It’s a top-loading chest fridge with a 20-litre capacity, and I love these.

Without any shelves, you can chuck whatever you like in – importantly, you can stand bottles of wine in it, too.

In my experience, the Reimo Variotech 3000 bench/bed is the best of its type if you’re after a track system that allows you to adjust the position of the travel bench. Here, it’s Reimo’s power rail system, which enables multiple locking positions, so passengers can sit behind the cab, and you then get a massive load area at the back of the campervan. There’s also the option of adding extra seats, costing £1,495 each.

Another thing here that’s a really neat piece of design is the table. There’s a swing-out leg attached to the corner of the bench, while a pole lives in the wardrobe and the tabletop clips to the inside of the sliding door. At mealtimes, simply slot the pole into the leg and screw the table on the top. It’s super-versatile. If there are four or five of you, making use of the swivelling cab seats, slide the bench forwards and position the table widthways, and you can all just about squeeze around.

If there are only two of you, then you can position the table lengthwise, with one sitting on the passenger seat and the other on the bench. Although it was January, we enjoyed some lovely sunshine in north Norfolk, and eating breakfast with the sliding door open took some beating at this time of year! In summer, you can swing the table all the way out to create an al fresco bar, too.

The test vehicle also featured the under-seat drawer (£360), which is handy for storing shoes, etc. Besides a limited amount of storage space in the kitchen
units, there’s a wardrobe at the back with a hanging rail, and the Vitronic control hub is housed here. The door on this opens upwards, which is a tad awkward when the campervan is fully loaded or when the bed is up. It would be better if there were a pair of doors instead, positioned at the height of the kitchen workspace.

Many moons ago, when Steve and I bought our own campervan, Deepdale Campsite was one of the first places we ever went, and at around the same time of year. I remember it being so cold that we lit the gas hob in an effort to warm the campervan up while we drank freezing cold tinnies of Carlsberg. It was so cold, in fact, that the moisture on the outside of our beer cans froze – at which point we decided it was time to go down the pub and sit by the fire!

Although it was equally cold this time around, we were saved by the Eberspächer diesel blown-air heating system, which is quite magnificent, and really comes into its own in winter. There’s an easy-to-use control panel in the kitchen with an on/off button and it also has several programable settings. It takes a few minutes to power up but, once it gets going, it blasts out heat from a vent under the driver’s seat that’s capable of cooking your legs if you linger too long when brewing a morning cuppa! The only issue with being in a pop-top is that the temperature soon cools down again as soon as you switch the heater off. I won’t lie. I did wear a woolly jumper over my pyjamas in order to keep warm at night…

The Eberspächer system is very efficient as it uses a negligible amount of diesel (not even noticeable after a weekend of heavy use), and a minimal drain on the leisure battery. We put this fully to the test by deliberately not booking a pitch with electric hook-up in order to test the capabilities of the 100W solar panel fitted to the roof.
OK, it was a sunny weekend, but the leisure battery was fully charged when we left. Admittedly, we didn’t turn the fridge on as it was so cold it wasn’t necessary, and this
is arguably the main drain on the leisure battery when camping but, if you use this carefully, you could easily camp off-grid for several days.

Apart from all of the tech already mentioned, the Urban benefits from LED touch lighting throughout, including blue mood lighting/reading lights in the cab and a lollipop light in the roof, which is handy if you have guests sleeping in the roof bed. There are a couple of 12V plugs and three-point sockets (one set in the kitchen and another by the sliding door), but it would be nice to have some USB ports, in addition. The Votronic control panel in the kitchen – which controls the lights, power and water pump – is easy to use and has a nice, clear display, indicating battery health and solar panel charge.