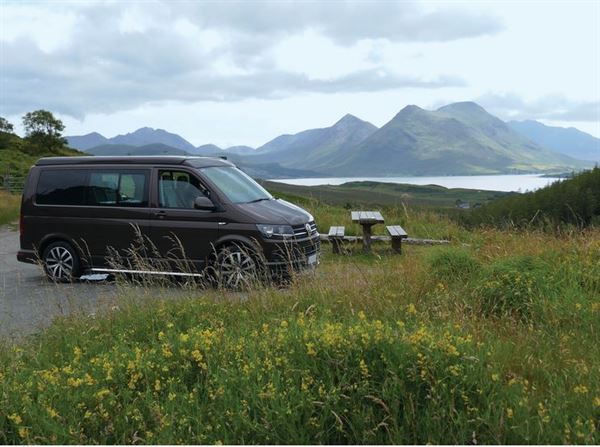 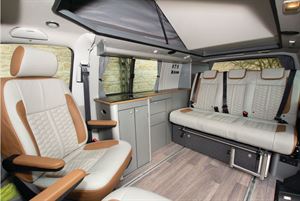 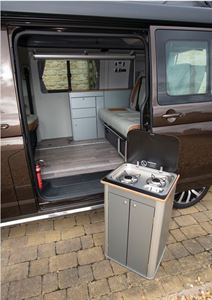 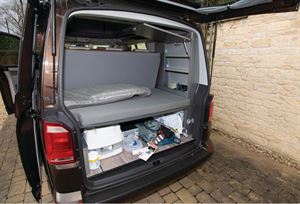 It was the summer of 2019 that set the ball rolling on a new campervan in the Vaughan household. A sudden change in family circumstances meant that we needed five seatbelts and our much-loved VW T5 California SE, like many campervans of its ilk, had only four. After much deliberating, we cancelled camping that August and headed to France crammed into a small BMW hatchback instead.

So, now the Cali was on borrowed time but, not wishing to borrow money, I was looking for an affordable route to update to a T6 with the requisite extra belted seat. The answer seemed obvious, having enjoyed our time virtually fault-free with the California and I started looking for a T6 California Beach (the model with a pop-top, full-width rear seat, but no galley). There were plenty on the market at the time for under £40k, mostly ex-lease vehicles on offer with car supermarket outfits.

However, we would definitely need to enhance the Beach’s meagre facilities with some form of kitchen unit and, while there are numerous removable pods on the market, none seemed to be very well designed. I poured over the Reimo catalogue for many an evening, considering whether any of its galley units could work for us, but never really hitting upon a satisfactory answer.

Then, with a touch of serendipity, Sam Shortland from Concept Multi-Car was in the What Motorhome office, delivering his new HemBil Urban camper for review by our sister magazine, Campervan. Even he admitted that the California Beach looked like a great-value option, but cheekily suggested I might like to buy the new Urban that was sitting outside. I’d seen – and really liked – the Urban at its launch at the previous October’s NEC show, but the price was a stumbling block. Then, I took the HemBil home to show my wife, Katy; we did some sums (which including selling a sports car and part-exchanging the California) and we were 99% of the way to buying our new campervan.

Before that, though, I racked my brain for alternatives. We wanted to stick with a VW, because Katy likes the way they drive (having had a Polo and a Golf), and she uses our campervan as a daily driver. The short-wheelbase Transporter is the perfect size for this role, too.

What I knew I didn’t want was a camper with a double cab passenger seat to give us the extra seatbelt. With their fixed backrest angle and lack of walk-through to the back of the campervan, these three-seater cabs ruin any good camper design. Yes, you can make the bench swivel, but only in a cumbersome and awkward fashion. No, it had to be the infinitely better solution to having five seats – fitting a wider rear bench.

I was only prepared to consider a type-approved conversion from a company with an established history in the VW market and, although I might have been able to spec a Bilbo’s Komba to suit our needs if buying brand-new, that would have tipped us over budget.

Fortunately, the Urban was already registered as a demo, so there was a useful saving compared with a new model. Not only that, but this was at the time of the changeover from the T6 to T6.1 Transporter. It’s always tempting to have the latest design but I’m still not convinced that the newer van is necessarily a step forward. Our T6 has a comfortable left footrest when you’re driving, which has been replaced by a rather intrusive console on the new van. The DSG gearbox has also lost its sport mode, not something we use often, but it’s nice to have occasionally. The new electric power steering is undoubtedly lighter, too, although I prefer the feel of the old hydraulic system.

Not only that, but the T6 has the sort of simple ageless design for which VW used to be renowned – I’m not sure that the T6.1’s bolder grille will age as well.

The more we pondered, the more the CMC HemBil Urban campervan fitted the bill. It was a DSG automatic, for a start, which was on Katy’s must-have list, while I was rather taken with the full leather interior – so much more practical than cloth with kids and a dog.

Finally, it had the Comfort dashboard – as fitted to top-spec Caravelles and Californias – which looks much more upmarket than the standard fascia – or the one in the T6.1! It’s a rarely seen option, though, because it cost over £2k.

In fact, the only stumbling block might have been the colour, which of course you can’t choose when you’re buying a campervan that’s already been built. Chestnut Brown wouldn’t have been our first choice but, now we’ve become used to seeing it on our drive, we rather like it – it’s different, not often seen on other Vee-Dubs, and receives a remarkable number of positive comments.

So, the decision was made, the finances sorted, and we persuaded Sam to make a couple of changes to the demo Urban. Most importantly, we had a huge drawer fitted under the Reimo sliding seat where, previously, there was just open space leading into the boot. This has been a godsend as it’s really useful storage. Then, we asked for shelves in the wardrobe, which make this area much more practical for our clothes. And, lastly, we wanted a Thule roll-out awning on the side as we’d been used to having one on the Cali (even if it seems to be a rain shelter more often than a sunshade!).

Excitedly, I collected the Urban – still with just 2k miles on the clock – from CMC’s premises in February 2020.

So thrilled were we at the prospect of our new campervan, that we’d already booked two weeks in eastern France for that summer and a trip to Orkney in May. But, of course, 2020 didn’t quite go as planned for any of us and our shiny new camper barely moved for months. We did manage some ‘drivecation’ holidays with the kids, just parked up outside the house, though.

That gave us a chance to work out where everything would go, try out the beds, etc, and here I should perhaps explain a bit more about the Urban. Its key feature is the extra-wide Reimo sliding seat, which can genuinely accommodate three people (even including two child seats with Isofix). Not only does a movable bench make for a vastly more versatile campervan (as we proved with the Cali), but the width of our seat allows for a much more comfortably proportioned double bed for two folk that are used to a super king size at home.

Of course, making the seat/bed wider means the kitchen is considerably narrower, but the HemBil design cleverly features a wider section of kitchen at the front, so a full-sized two-burner hob can be fitted. In fact, this whole section of the galley can be removed (complete with gas compartment), so you can cook outside. We loved this concept but, actually, we’ve never used it. Perhaps, we just eat out too much…

Nevertheless, fears that the slimline kitchen wouldn’t have enough storage were unfounded. When we unpacked the California, we jettisoned anything we didn’t really need and the rest went into our new Urban, no problem. We have to be careful not to buy too much fresh food in one go, but the top-loading fridge holds way more than its 20-litre capacity would suggest and we much prefer this to front-door designs that seem to hold less.

A key aspect, however, and, one that I’d urge any VW camper buyer to consider carefully, is rear boot space. The lower section (under the mattress) holds our Porta Potti, levelling wedges, mains lead, walking boots, buckets and spades (if going to the beach) and more.

Then, the upper area houses all our bedding (for both lower and roof beds), as well as coats and sometimes extra bags of clothes, too. Looking at some VWs, I do wonder where you’d put everything!

We couldn’t, perhaps, have picked a worse time to buy our camper – Covid has curtailed many plans and we’ve yet to enjoy the summers in France in it that we’d so looked forward to. But, on the other hand, we couldn’t have picked a better time to buy – our campervan is probably still worth nearly what we paid for it, prices having risen to the point that a new T6.1 Urban spec’d like ours would be over £70k, and VW Transporter delivery times are unpredictable but typically six to eight months.

When we went to Devon five-up (plus fluffy dog!) in the soggy summer of 2020, we had the back seat slid as far forward as you can with passengers on board and loaded the boot like a van, with our awning, pup tent, and all manner of camping kit. When we arrived on site other campers said they couldn’t believe we could all be accommodated by such a small campervan, but we were soon set up and very comfy. And, when we went off to explore the south Devon scenery, our little T6 could squeeze down those lanes with hedges on either side virtually touching the door mirrors and grass growing down the middle…

Our most memorable trip to date was, perhaps, the Urban’s first – to Scotland in July 2020, visiting the isles of Skye and Raasay, where (again) we were so pleased to be driving a small camper. Then, in 2021, despite lockdowns, we managed 24 nights away in the brown bus – not bad when you consider how many test campervans arrive chez Vaughan! We often nip off to the Norfolk coast for fish ‘n’ chips, walks along the beach and a bit of crabbing – even just one night away at a weekend seems like a holiday.

Sam reports that we’re not the only ones to appreciate the Urban’s unique take on the proven VW camper format, saying “customers love having a double-burner hob, without compromising the width of the bed, combined with the ability to remove the cooking pod for use outside or in an awning.” He’s also since developed the Urban-S which has a slim kitchen along the full length and a single-burner hob, but still offers usefully more storage than the conceptually similar Reimo City Van.

Two years on, we still love our camper and, despite having seen and reviewed many other VWs since, we haven’t seen anything that we’d swap ours for. It’s not perfect, no campervan ever is – we’d like to banish the few rattles (made worse, I’m sure, by the lowered suspension), and the sliding seat rails fill up with sand, grit and dog hair that is awkward to vacuum out (the California’s seat channels are covered). The only real fault has been the failure of the solar panel, which we’re waiting to have replaced under warranty.

Other than that, the only issue has been the way we seem to get through expensive tyres (the last pair cost £307). Katy assures me that she doesn’t spend her lunch hours doing doughnuts in the school car park…

Read our first review of the CMC HemBil Urban here.