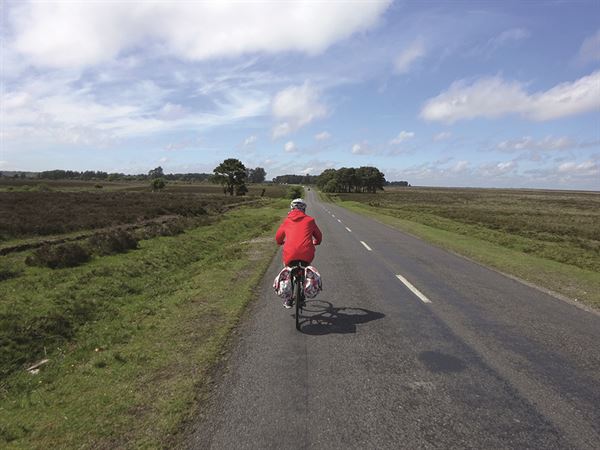 You know, I really, really enjoyed that,” I continually piped as my wife, Jane, and I stumbled over some of the billions of pebbles that form the shingle spit reaching over a mile into the Solent as we returned from visiting the fabulous Hurst Castle. It’s a phrase Jane was to hear many more times on our week-long break on the Hampshire/Dorset border. 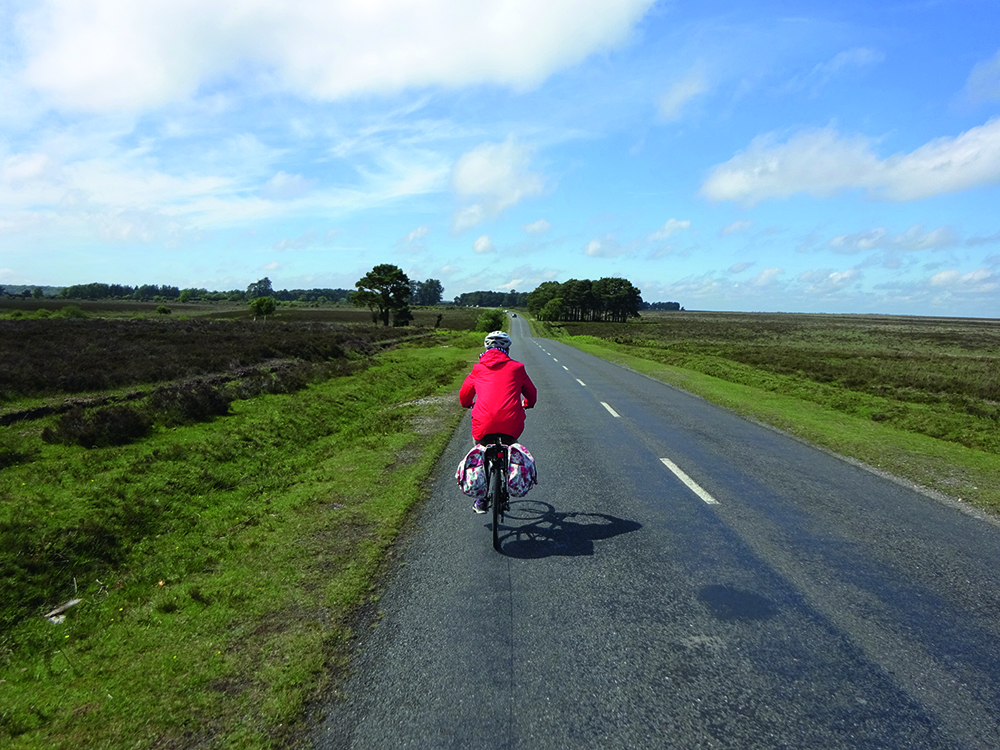 We were staying at the pleasant Lytton Lawn campsite, near Milford on Sea and it had taken some Thomas Telford engineering skills to get us level, with help from the warden’s supply of wooden blocks. That done, we were soon on our bikes, taking the quiet lane to Keyhaven. Well, it should have been quiet, but in glorious Sunday weather lots of fellow cyclists, including the would-be Chris Hoys, were out and they were joined by Stirling Moss et al in their cars. Luckily, Jane and I are of the tortoise cycling variety, so didn’t get into any scrapes.

At Keyhaven, we rode alongside the lagoon formed by the Hurst Spit to Milford on Sea, where the spit joins the mainland. It made an incredible sight, like a gigantic golden arm reaching out as if to grab the Isle of Wight a mere mile away over the Solent. Joining the throng for an ice cream, we could see the coloured sandstone cliffs of Alum Bay stretching round to the iconic Needles and the red and white hooped lighthouse.

With the sun beaming down next morning we were on our way to Sway, our gateway to the New Forest. The lanes via Everton village and Gordleton were a little more uphill than down dale for my liking. It was all worth it when, on the outskirts of Sway, we had our first encounter with some New Forest ponies. They strolled across the road right in front of us.

We made for the nineteenth-century Sway Tower. At 61m (200ft) it appears totally out of place in its surroundings, but merited a visit simply because of its incongruity. A further steady incline brought us to Setthorns Wood and our first bout of off-roading as we drifted downhill towards the disused Ringwood to Brockenhurst railway line (part of National Cycle Network Route Two). 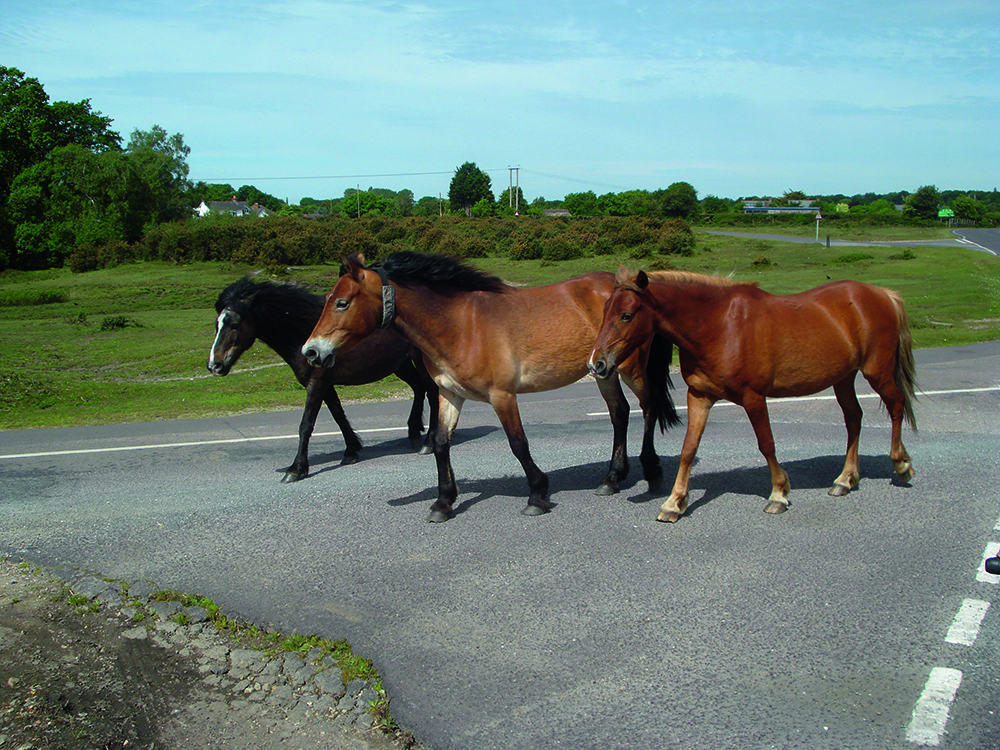 Heading towards Brockenhurst on this route, part of me wished that it was still part of the rail network, but I took pleasure in being able to appreciate the wonderful views on each side. Brockenhurst is little more than a one-street village; it ranks as pretty as anywhere in England. A ford runs through a tributary of the Lymington River at the western end of the main street and the village is surrounded by swathes of open ground interspersed with wooded ‘inclosures’ and lots of free-roaming wildlife.

After our picnic on the Black Knowl open space northwest of Brockenhurst, where we were keenly watched by two jackdaws, we headed west to Rhinefield. Countless wild ponies mingled with free-range cattle and we spotted a foal unsteady on its spindly legs. There’s no following that, so we made our way back to Mobes (our motorhome), taking the train from Brockenhurst to Lymington and then cycling the rest of the way.

And so to Hurst Castle; we parked the bikes and started the walk across Hurst Spit, lagoon to our left, Solent to the right. After about 20 paces I began to wish we’d taken the tiny ferry from Keyhaven village as the walking was awkward. At the castle we were faced by large concrete walls and an entry fee, which always makes me sceptical. It all looked very unpromising and I wondered if we’d done the hard yards across the spit for nothing. But a tiny one-foot gauge railway line, running from the lighthouse into the castle through two gatehouses, aroused my interest and in we went.

Despite ongoing renovations, this has to be one of the best places we’ve visited, with open access to most of the rooms and turrets and dungeons to explore, plus lots of fascinating historical information along the way. Started in the time of Henry VIII, Charles I was held captive here prior to being taken to London for beheading. The castle was expanded greatly in the 1800s to counter a potential French invasion.

After a cup of tea and sausage roll in the pleasant café, we were back on our way along the spit, watching a half-dozen lucky souls taking the ferry. Next day we took to the saddle again and, despite a couple of wrong turns (which entailed having to push our bikes across sand), we enjoyed the 10-mile ride west along the coast to Mudeford with glorious views of the English Channel and the Isle of Wight.

A trip to Bournemouth was a ‘must’. A four-mile ride inland led us to New Milton station for the short train journey. Bournemouth is blessed with good cycle lanes, so we soon found our way to the beautiful gardens leading down to the seafront. Armed with beach towels, we spent a happy hour with hundreds of others, then took a stroll along the water’s edge watching the funicular railway.

We headed east along the promenade towards Boscombe. The strong wind blew directly in our faces and made the ride quite a struggle. We eventually reached Hengistbury Head, which gave us much-needed respite as we rode in the lee of the head itself and in the shade of the nature reserve’s many trees. What a beautiful spot! With Mudeford visible, we pressed on past the extraordinary beach huts. At close quarters we could see that many have mezzanine floors and are fantastically plush – though we wouldn’t swap our motorhome for one! 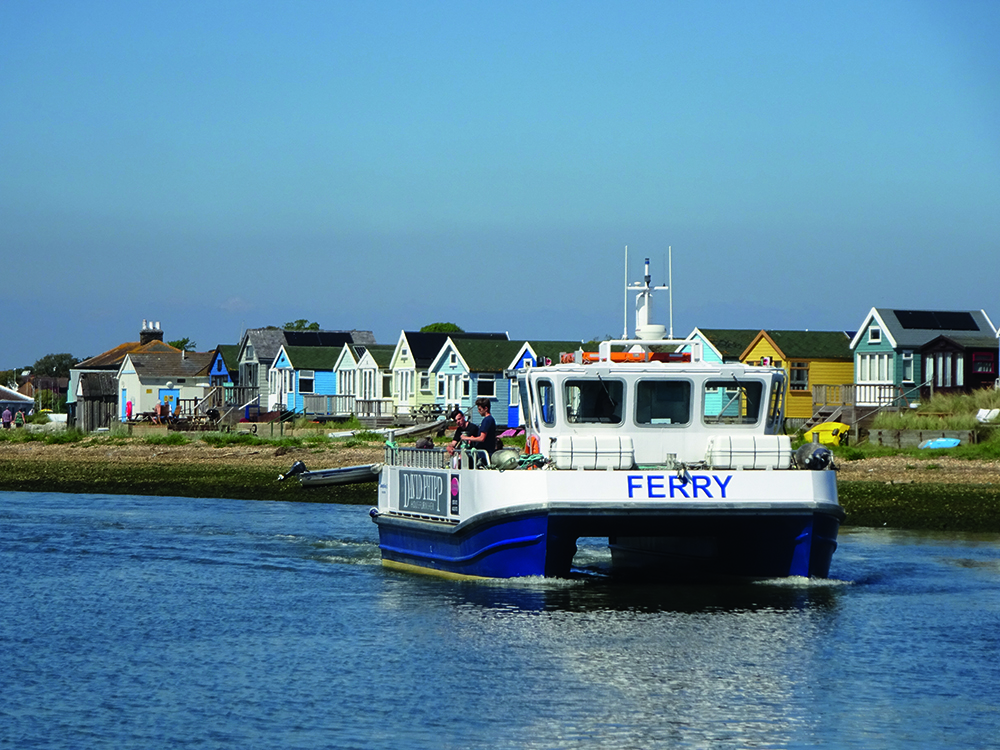 We took the ferry to Christchurch as we never tire of visiting this lovely town, with the old church at its centre, the walks alongside the River Avon and the main focal point, the quay. We ate our picnic on the grassy area next to the shimmering water of the inlet, harangued by a persistent mute swan, before the train took us back to New Milton for the four-mile ride to our motorhome.

Relaxation came with our trip to the Isle of Wight by a ferry from Lymington Quay. With the bikes left at Lymington, a bus took us from Yarmouth to Ventnor, where we had our picnic by the beach. Bucklers Hard was the destination to round off our holiday. With a helping wind, it proved to be an easy ride along country lanes. My map indicated that there was a footpath through the centre of the two rows of shipwrights’ cottages and a cycle and footpath to Beaulieu.

It was a gorgeous setting, with the picturesque cottages, the remains of the boatyard docks still visible and the tranquil river. We quickly knocked off the couple of miles to Beaulieu with its timber-framed houses. We’re not much interested in the National Motor Museum, but in the village itself is a classic car sales shop and these vintage machines are very impressive.

We were now within striking distance of the remote Beaulieu Road Railway Station to assist our return journey. It was 80 minutes until the next train and we had around five miles of riding to get there. This turned out to be one of the most enjoyable of all the rides, initially through woods, then out into the open heath that characterises the New Forest. Our train was delayed, ironically by a bicycle on the line near Woking. Our bikes will not be following suit given such a fantastic holiday!