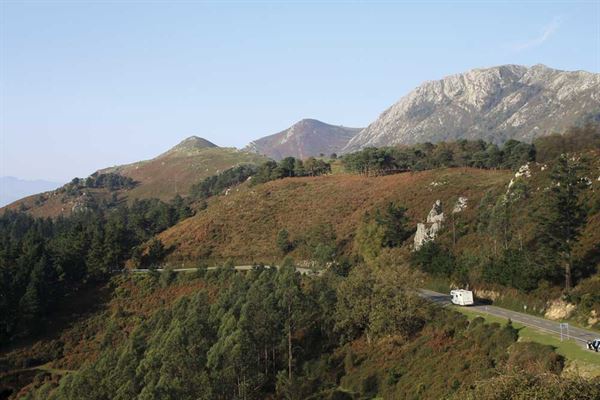 It had been a long-held wish of my husband, Keith, to visit northern Spain’s gorgeous coastline.

Finally, we made the journey after crossing at Dover and driving through France and into Spain. We had toyed with the idea of taking the ferry to Santander, but opted to meander through the French countryside, avoiding the motorways as much as possible.

Time was not an issue. Our ageing motorhome had been prepped with a new cam belt, tyres and exhaust and we felt confident she would make the journey.

It was wonderful to travel south, with the weather warming as we went. Sleepy villages and towns passed as we enjoyed the autumn colours of forest and countryside.

We stopped at boulangeries for morning croissants and baguettes for lunch, with the occasional fancy éclair from a pâtisserie thrown in.

On reaching Spain, we were amazed by the dramatic mountainous and green vista. We’d expected rain – this region is known as the ‘green coast’ of Spain. Yet, after only an initial wet couple of days, we enjoyed a lot of sun, particularly in the wonderful Picos Mountains where we had glorious views. 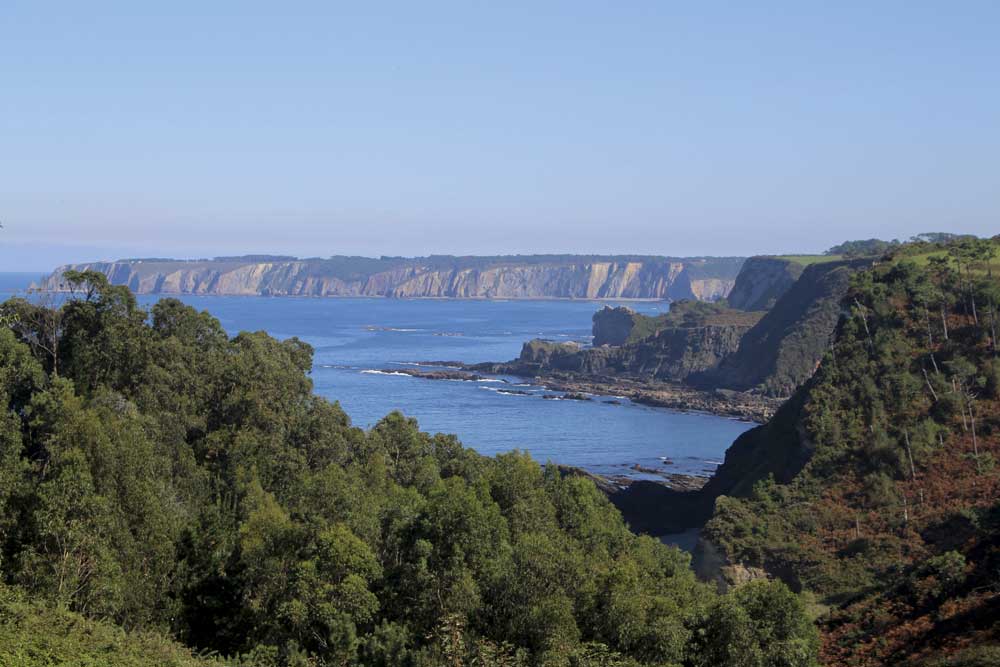 Our first site, Camping Oyambre, was near the attractive harbour town of San Vicente de la Barquera, with the backdrop of the Picos invitingly close. In the distance we could hear the muted sound of the bells worn by cows and goats.

Camping Oyambre is situated less than a kilometre’s walk from a fantastic sandy beach with huge, roaring rollers making the sea a magnet for surfers. We could hear the noise of the waves from the site and, although it was a little too rough for us to go in the water, we enjoyed watching surfers riding the waves. It was great to walk our dog, Geordie, who had spent far too long in the ’van on this trip for a border collie.

In San Vicente, as on most of our travels in Spain, we found that parking was free. We came upon a restaurant serving fabada, a popular regional dish made from beans, chorizo and blood sausage, which is often served as part of a menú del día.

We had really been looking forward to exploring the Picos de Europa and the drive into the mountains to Camping La Viorna was spectacular. The huge mountainsides and steep drops to the river below, along with the winding roads, made for an interesting journey – especially when meeting a coach on a rather tight bend! We stopped a few times to absorb the views and appreciate the splendour.

Camping La Viorna, just past the charming town of Potes, is a fantastic site. The views are incredible and I enjoyed a swim in the pool (unheated), encircled by mountains and autumn colours. We watched eagles soaring as we waited for the brakes to cool after quite an arduous journey down some incredibly steep hills along the N625/N621. The scenery along this route was amazing; I was transported to New England in the fall and, at the dried lake beds at Riano, to the North American plains. At other times I felt like I was in South America with clouds drifting across the mountain peaks.

We had driven to Fuente Dé hoping to travel up the mountain in the cable car, but found that dogs were not allowed. Instead, we took a walk across Liordes Meadows to see the waterfall, passing by a shepherd with his dogs and a herd of goats, their bells gently clanging.

Throughout our time in the mountains, we noticed goats and sheep being protected by what I recognised were Leonberger dogs (presumably from the Iberian wolves that we’d heard about in these parts). Other animals to be seen in the Picos are chamois, with their curved horns, and capercaillie.

We drove up to the Monastery of Santo Toribio de Liébana where, in a side chapel, there are fragments of one of Christianity’s most coveted artefacts, the cross that Jesus was crucified upon. This site is one of four main stops for pilgrims walking to Santiago de Compostela. Indeed, we passed many pilgrims on their way to Santiago and we were truly humbled by their feat.

Another journey took us, via Las Arenas, to Covadonga – the spiritual and religious centre of the Asturian people – where we visited the basilica and the Holy Cave built into the rock. The Fountain of the Seven Spouts below the Holy Cave was visited by many a young woman while we were there. It is said that those who take the waters will marry within a year; some of the accompanying young men looked rather sheepish as they stood back a little! 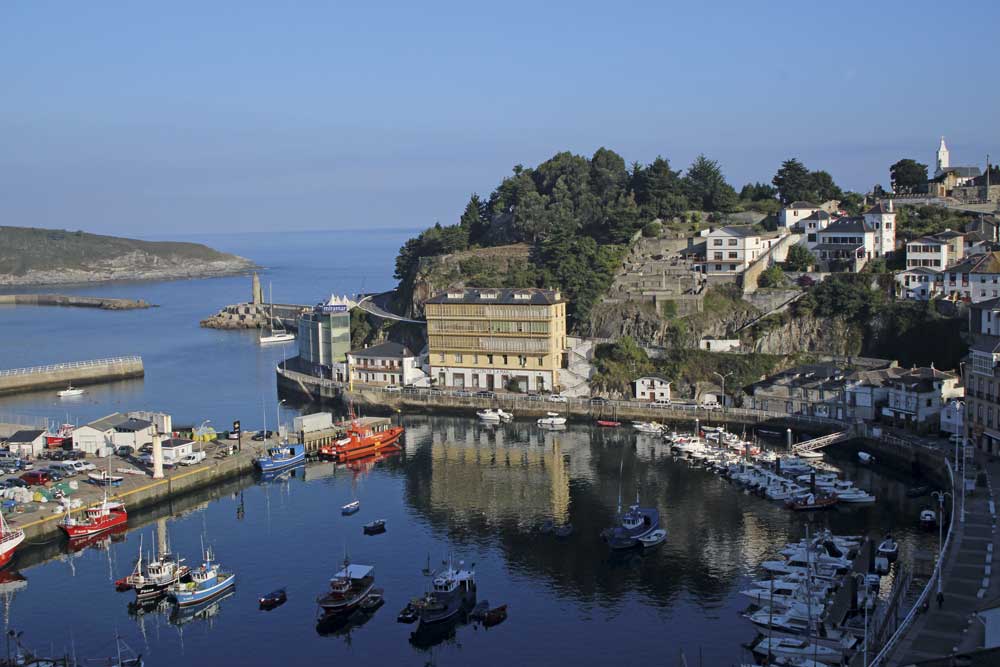 Driving to the coast and the Galicia region

The drive up to the Enol and Ercina lakes from Covadonga is restricted at busy times due to the sharp bends and narrow roads. We drove about halfway up before pulling in to park and to walk the rest of the way. It was just as well that we did as, whilst we were pulling on our boots, the familiar sound of bells was heard and a long line of cattle made its way along the road. Goodness only knows what would have happened had we continued in the ’van.

Leaving the Picos de Europa for the coast, we drove to Candás; it reminded us very much of parts of Brittany. We were fortunate, at Camping Perlora, to pitch in one of the highest spots, which afforded us great views of the rocky coast.

It was an interesting time at Camping Perlora – a neighbouring ’van housed travelling flamenco dancers and we were treated to impromptu displays as they practised. There are two beaches within easy walking distance of Camping Perlora and Candás is just a short stroll away.

We went to the Saturday market in Candás and bought the local creamy blue cheese, queso cabrales, which is quite rich. We were also served cider in the traditional way of Asturias, poured from a great height into a glass. Candás has strong Celtic connections and we were also treated to a display from bagpipe players parading the streets. 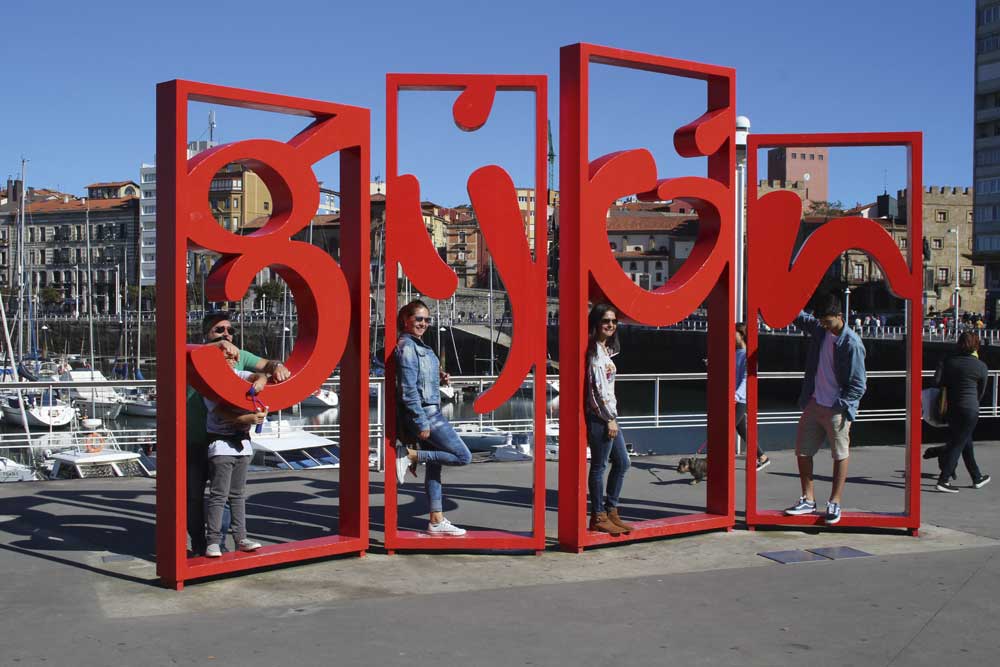 Just a short walk from Camping Perlora is the station and we caught a train into Gijón, costing €6 (£5.52) each. Dogs are not allowed on buses in this part of Spain and have to be muzzled on trains.

We headed for the harbour and Gijón’s old town and enjoyed a good walk following the coast up over the Santa Catalina headland and around before descending to a large and popular beach, Playa de San Lorenzo.

As we travelled further into Asturias, we camped just outside Luarca. The steep walk into the town was well worth it; there are several places to stop and appreciate the harbour and beaches and we enjoyed wandering around the narrow streets.

In the fish market fishermen were preparing their catch on the harbourside for shoppers and restaurant owners. Luarca used to be a busy whaling town and has always had a strong fishing tradition.

Driving to the far west it was interesting to see the immense viaducts that traverse the deep valleys as we journeyed towards the Galicia region. We explored Tapia, Aveigo and Ribadeo as we followed the rugged and spectacular coastline.

We had a couple of final stops to make before crossing back into France.

Asturias has a fantastic viewpoint; very popular. We arrived early at Mirador del Fitu, near Caravia, but were still unable to get into the car park. Luckily we were able to park nearby, along the road.

The views were stunning, the morning mist was slowly rising up the mountains revealing huge limestone peaks, small towns and green meadows juxtaposed with the rich colours of autumn. It was well worth the early alarm call!

Our last stop was at Santillana del Mar with its cobbled streets and wonderful old building, but our main interest lay a little outside the town. We had heard the story of how, in the nineteenth century, a father and daughter had discovered a cave with prehistoric artwork on the roof, which has now become known the world over as the Sistine Chapel of paleolithic art.

We found the Museo de Altamira, in which a large replica cave has been built, absolutely fascinating, although we had to queue for a long while to get in. The original caves are closed to the public (except for rare occasions), but the replica cave displays the incredible artwork shown exactly as in the cave itself.

As we entered the cave at our allocated time, there were gasps of amazement. The cavern really gave us a feeling of how these ancient people lived and the replication of paleolithic art was extremely sensitively worked. The contours and fissures in the rock were used to represent the animals and one can see the creatures bellowing, facing each other or resting.

It was a truly enlightening and memorable experience. At last it was time to take the picturesque coast road back towards France, passing Deba and San Sebastian. We were treated to dramatic new scenes around every bend. The wild rocky shoreline put on its best display as we bowled along watching waves of a height and force we’d never seen before. It made us aware of just how insignificant we are when nature ‘speaks’.