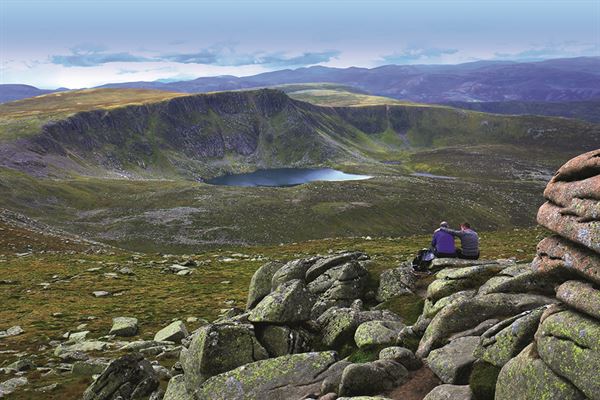 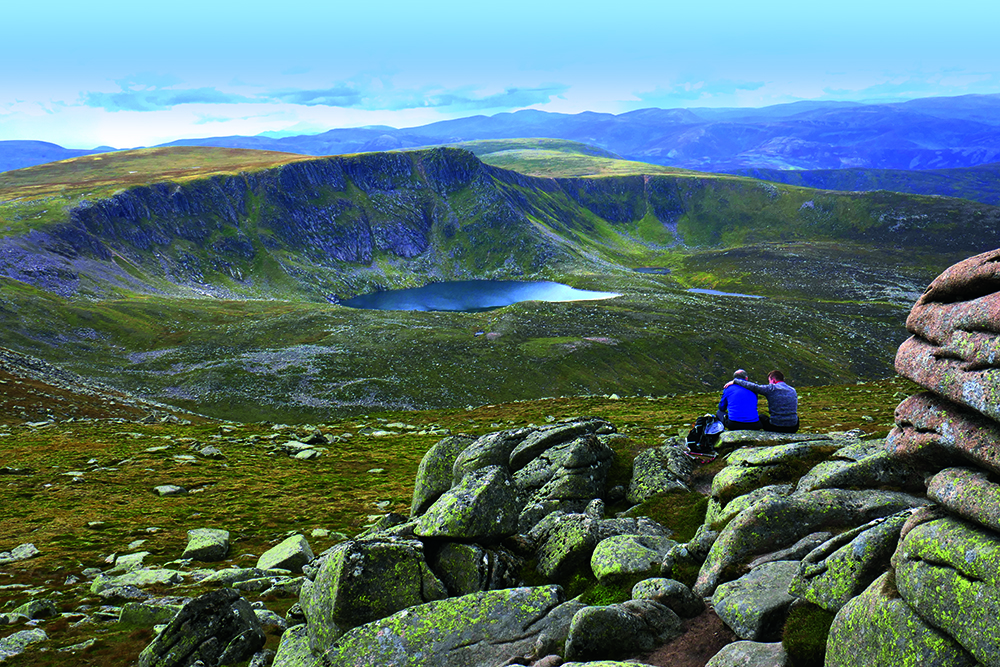 The northern county of Caithness is ideal for hikers, birdwatchers and history-lovers. This remote land has big skies, vivid light, endless moorland and unrivalled coast. Around every corner the stories of people, from the Neolithic to the present, have been preserved in an exceptional landscape. We disembarked from the Orkney ferry in heavy rain, soon picking up the single-track road towards Dunnet Head, more optimistic about a view than the weather implied.

Back in the Devonian period (around 400 million years ago), Caithness was mountainous and arid. The Old Red Sandstones were formed during this period, leaving layers of rock that split easily into flagstones. When these sandstones meet the sea the layered structure creates sheer cliffs and stacks that are perfect for nesting sea birds. The rain had stopped when we reached the rocky promontory of Dunnet Head and we walked to the cliffs in weak sunlight.

Dunnet Head is managed by the RSPB and a warden was helpfully pointing out birds. A wispy sea mist rolled over the cliffs and the view was sporadic, but we managed to see puffins, kittiwakes, fulmars and a seal bobbing in the waves. We walked along the coast by the lighthouse and the old military buildings to a viewpoint; sandstone cliffs to one side, moorland dotted with lochs to the other. This was Caithness in miniature.

Following the coast to pretty Ham Bay, we explored around the old four-storey corn mill and mill pond among fragrant meadowsweet. By Gill’s Bay the sun had burnt off the mist and we watched an Arctic skua fly along the shore while looking out to the abandoned island of Stroma, just a few miles off the coast. The Old Red Sandstone makes another dramatic appearance at Duncansby Head.

The walk along Duncansby Head is stunning and this wild coast contrasts with the commercialism of John O’Groats. With ever-changing views, precipitous cliffs, Thirle Door sea arch and two jagged cone-shaped sea stacks, it is breathtaking. 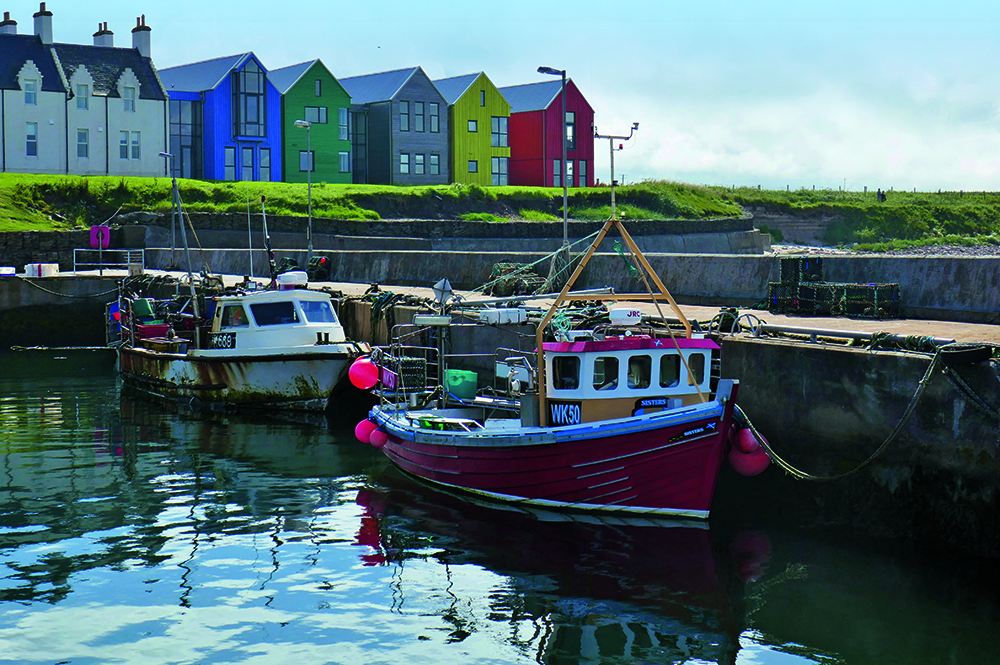 Neolithic stone burial cairns reveal clues about life here more than 5,000 years ago. We had visited the well-known Camster Cairns before, so sought out a remote site at the Loch of Yarrows. The single-track road was made entertaining by resurfacing work and we had to wait while vehicles manoeuvred to let us by. It felt a long three miles to the car park as chippings flew up hitting the bodywork.

Loch of Yarrows has a short archaeological trail that includes two Neolithic burial cairns and, in a dry spell, we set off across the hillside – which quickly became boggy. High above the loch, these neighbouring cairns were used for burials for over 1,000 years.

Whereas archaeologists have some idea how burial cairns were used, the unique Caithness stone rows that the Bronze Age (4,000 years ago) people left are a mystery. Pulling in to the layby at the stone row at Mid Clyth (known as the Hill O’Many Stanes), I didn’t know what to expect. Standing among the 170-plus stones that remain, I was no wiser. The stones are mostly knee-high and fan out in 23 rows with a central axis that runs north-south.

Nearby on a low rise above Loch Stemster is another peculiar setting of Bronze Age standing stones. Achavanich is a rare U-shape of 35 Caithness flagstones all around my height. Unusually, the broad face of each stone does not face the centre but is at 90 degrees, forming a row of domino-like stones. 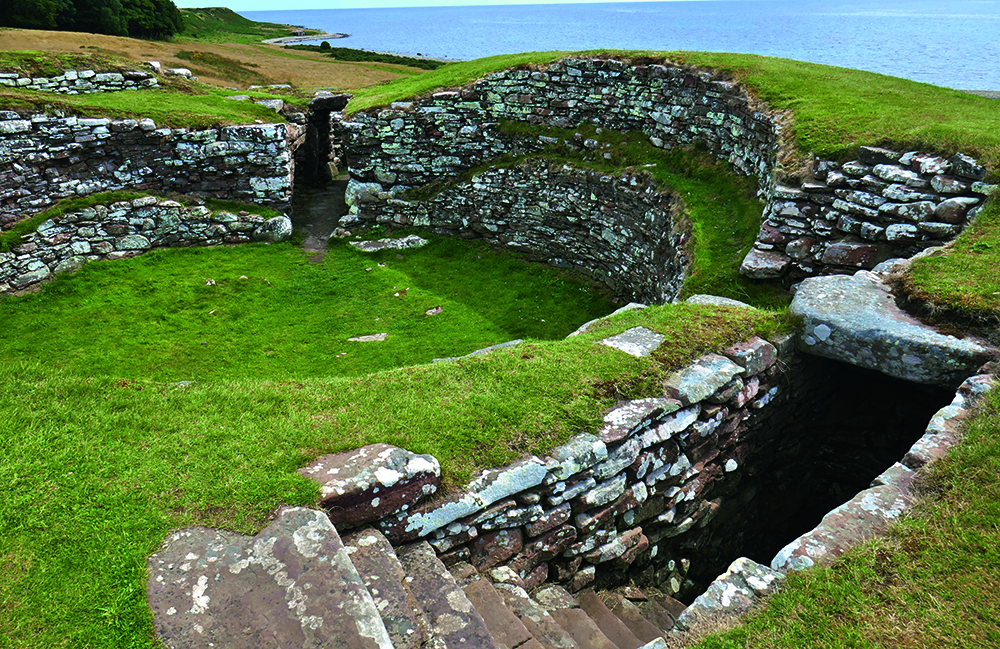 The brochs of Caithness

Caithness is peppered with brochs – impressive Iron Age fortified round towers with a double wall enclosing stairs. Near Nybster we found the remains of a broch and, below, a fishing hut with a Caithness flagstone roof. Beside the site is a weathered ornate monument decorated with gargoyles. Known as Mervyn’s Tower, this was erected by Tress-Barry from unearthed stones. A few days later – and further south in Sutherland – we came upon Carn Liath Broch, again with a clifftop position. This well-preserved and remarkable broch gives a good sense of the sophisticated construction. 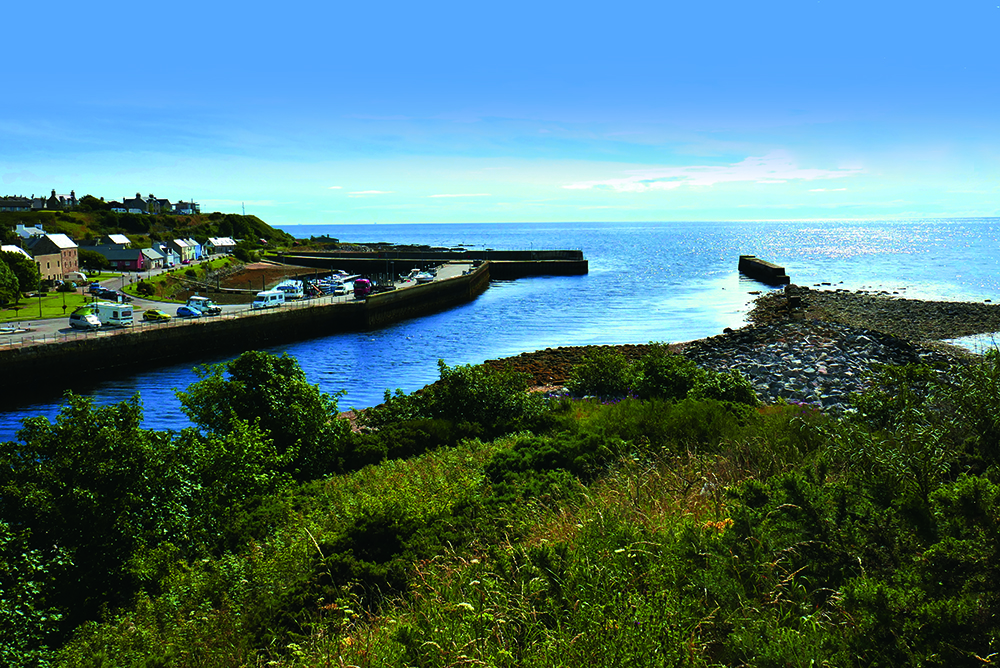 North-bound in the sunshine

After a night at the attractive harbour at Helmsdale, a popular halt where we ate in a local pub and wandered the harbour walls watching a seal bobbing in the water, we returned north in sunshine.

Whaligoe Steps has been on our list for some time and we grabbed the chance to explore this picturesque anchorage on a fine day. Built in the late 1700s, these steep and winding steps were used by fishing folk. It is said that there are 365 steps built into the cliff; I didn’t count them as I was too busy enjoying the views!

Helmsdale has a touching memorial to the people who were cleared from their productive land to make way for sheep farms in the eighteenth and nineteenth centuries. The deserted village of Badbea gives visitors some idea of the hardship those evicted families underwent. Moved from sheltered Berriedale to this exposed sloping hillside between heather and sea cliffs, the forced settlers had to tether their sheep and children to stop them blowing into the sea! I walked between the haunting ruined crofts that homeless families had hand-built from scratch.

At the campsite in the grounds of Geddes House the owners apologised for the ‘state’ of their garden. “The grandchildren have visited and taken up all our time,” the owner told me as I paid. So, the glorious and colourful walled garden was a pleasant surprise. I sat there the next day with my morning brew watching a red squirrel scampering in the trees. We drove among the whisky distilleries, forgoing a tasting visit to fit in a straightforward half-day walk up Ben Rinnes (2,759ft).

From the charming town of Ballater we drove to the ample parking at the Spittal (hospital or hostel) of Glenmuick. This is Balmoral Estate land and you can walk along the track by the alluring and remote Loch Muick. With a boathouse on the loch, Scots pine and heather-clad hills, this is shortbread-tin Scotland and you might expect to hear a piper any moment.

We hiked up Lochnagar (3,789ft), a popular (but tough!) climb that isn’t for the unprepared, even in glorious weather. We were lucky to spot a plump ptarmigan on the summit ridge and descended to the loch by the lively waterfalls of Glas Allt. We continued south via Glenshee, taking a stroll through the valley accompanied by curlew and lapwing.