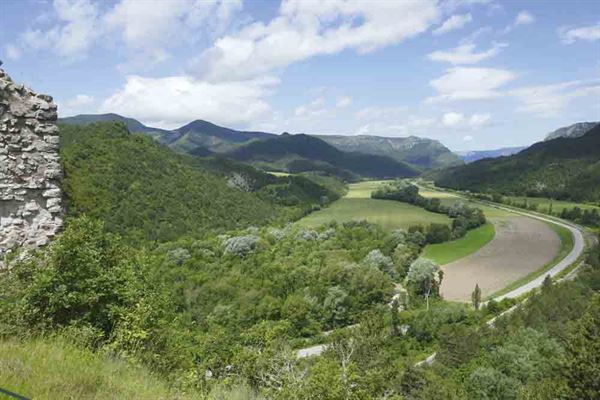 It was market day and the town of Die in the Drôme Valley was animated and lively. After browsing the stalls packed with local food and fragrant lavender products, we stopped for coffee.

Sitting outside a café I watched as, across the square, a woman in black picked up her accordion and began to play. With a tabac presse as her backdrop and a fountain playing alongside her, the sights and sounds couldn’t have been more French.

My brain gets confused when we travel through more than one country and France was the seventh of this trip. We had crossed the border from Italy and it would take me a few days to stop saying, “grazie” and “si”.

We had never explored the Parc Naturel Régional du Vercors before so headed for its southern edges. We found what seemed to be a perfectly situated campsite at Lus-la-Croix-Haute, surrounded by mountains and walking routes.

Some might say location is everything, but we are also quite keen on pitches that our campervan won’t sink into. After some heavy rain the day before the grassy and sloping campsite was a little muddy and it was difficult to find a pitch that was both level and firm. Crossing our fingers that it wouldn’t rain again, we compromised with an almost dry pitch that did have spectacular views of snow-capped peaks.

Of course, the rain hammered down in the night and, after breakfast, we only got off our sodden pitch with the help of our Grip Mats. The sunshine returned to dry out my mud-splattered legs as we drove the few kilometres to the head of the beautiful Jarjatte Valley. 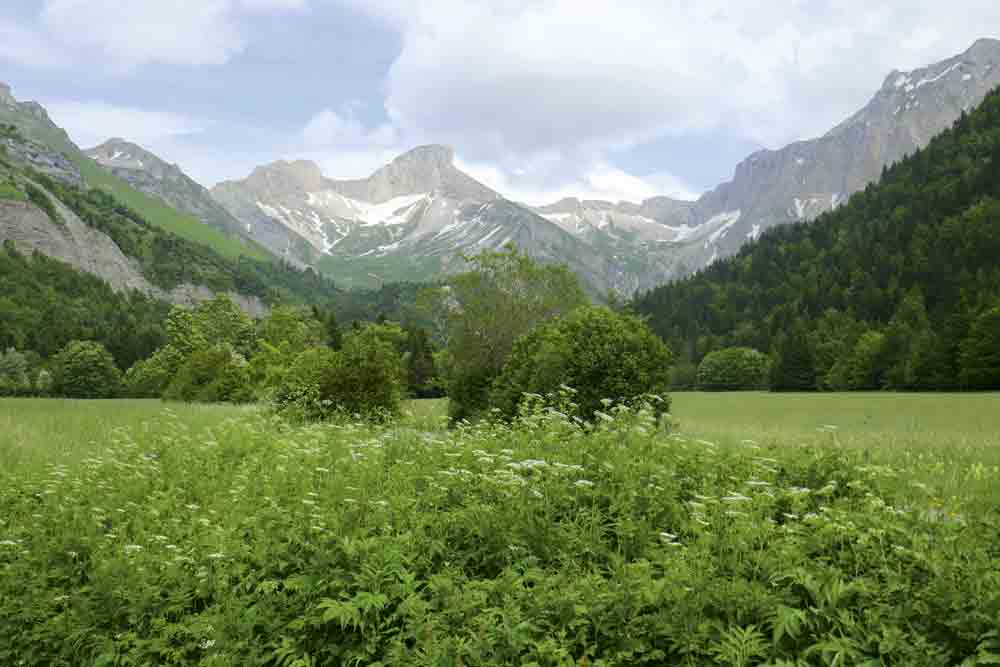 Waymarked tracks took us to delightful waterfalls swollen by the heavy rain. The Fleyrard Ravine was so deep we had to slip off our shoes and paddle through the ice-cold water.

Natural steps in the limestone helped us up the steep path to the high meadows at Col de la Croix, opening up tremendous views. There were hordes of butterflies on the rocky south-facing slopes; a dainty blue butterfly spurned Anthony’s sweaty skin and landed on my sweetly perspiring foot.

The meadows were riotous with colour: blue forget-me-nots, yellow globe flowers, pink geraniums and purple orchids. We sat among this natural palette watching golden eagles and vultures above us and taking in the views of surrounding mountains.

We had a glorious drive over the Col de Grimone, through the tiny mountain villages of Grimone and Glandage where, for centuries, people have farmed this difficult terrain. Gland means acorn and, in the Middle Ages, villagers harvested acorns for their pigs.

From the open slopes the road plunges downhill in to the shadows of the stunning Gorges des Gâts. Cut through the cliffs for the Glandage villagers in 1910, the road is occasionally narrow, particularly through the dark, roughly hewn tunnels. Like us, no doubt you won’t want to rush this drive and will stop in one of the many laybys and stand in awe under the steep cliffs listening to the rushing of the stream.

The enclosed gorge opened out as we reached the Drôme Valley. The River Drôme runs 80 miles through the limestone crags of the Vercors to the River Rhône. With no weirs, dams or polluting industry, this is a natural river and perfect for wild swimming and canoeing. With a cycle route along its length and plenty of waymarked walks, this is a great holiday destination.

After idly watching the skilful pétanque players in Die, we found the tourist office. In my confusing French-Italian, I asked for information on local walks. Armed with a leaflet, we headed around the town’s walls to pick up the six-mile walk to Col de Bergu.

Following a lane through vineyards and under mulberry trees, their ripe purple fruit squashed on the ground, ahead of us were wide views to the craggy Vercors Massif. As we began climbing, the woodland shade was welcome in the heat.

The zig-zag path took us to the ridge and contoured across the steep and sunny slopes where vultures soared above us. We climbed up to Col de Bergu, where we had views to the next valley, before descending on a forest track. The path took us steeply down through woodland following a stream that was ideal for cooling our hot feet in.

The Drôme is proud of its local food and wine and is an area that was an early adopter of organic farming. Learning about the local wine is part of many French holidays and, in the Drôme, they produce the sparkling Clairette de Die. We decided to make the most of a damp morning by visiting one of the producers in the nearby Vercheny, home to many Clairette caves.

The Carod family has created a small museum that gives a glimpse of life for early twentieth century local wine-producers. The audio-visual displays describe wine production and how the family farmed silk worms and grew walnuts (the English voice-overs are all in a mid-Western US drawl).

Later, the non-driver tasted a brut and a traditional Clairette in the shop. The latter is a perfect combination of sunshine and cool mountain air, with a sweet muscat taste. This light, low-alcohol wine is great for summer drinking and we came away with a couple of bottles.

The beauty of the Drôme Valley continued to Saillans, where we swung into the campsite, pitched and then walked into the pleasant town. Saillans has everything you would expect of a small French town, including an avenue of plane trees, squares with lively cafés, narrow streets and desirable houses with faded blue shutters.

From Saillans we took the bikes out on the quiet lanes along the river to the abandoned village of Mirabel. In La Clastre we sat under a shady tree outside the friendly bistro for coffee and classic apple tart; the taste of a French summer.

Crest is proud of its local food and deserves to feature in Les Plus Beaux Détours, a list of distinctive small towns and a great resource for touring France. 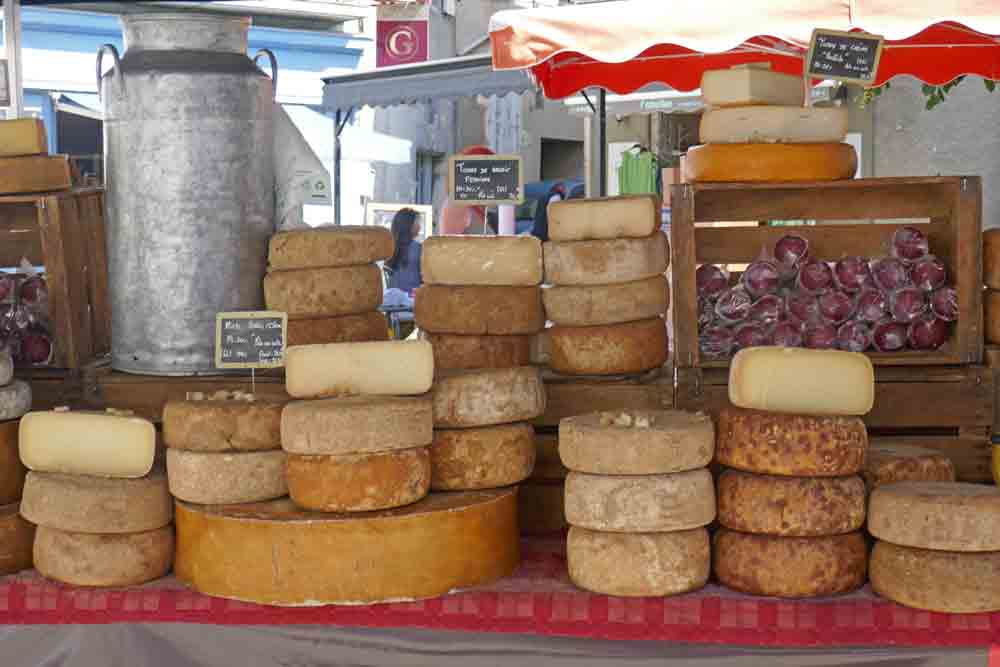 The chocolatier exemplifies the French passion for gastronomy and quality artisan production. So, after window shopping, we enjoy drinks and spectacular cakes at Crest’s Façon Chocolat, which creates inventive organic chocolates and cakes.

Old steps cut out of the bedrock and steep cobbled paths took us to the Tour de Crest. This imposing medieval castle keep or donjon is the highest in France.

Used as a prison from the fifteenth to the nineteenth century we saw the windowless cells where prisoners etched graffiti on the walls and climbed through the many floors to emerge on the roof with wonderful views over the town.

The Drôme Valley is renowned for its lavender products but, so far, none of the fields of lavender were in flower. Then, on the way to Saou, we found a beautiful sunny field that was ablaze with fragrant purple flowers dazzling in the sunshine. 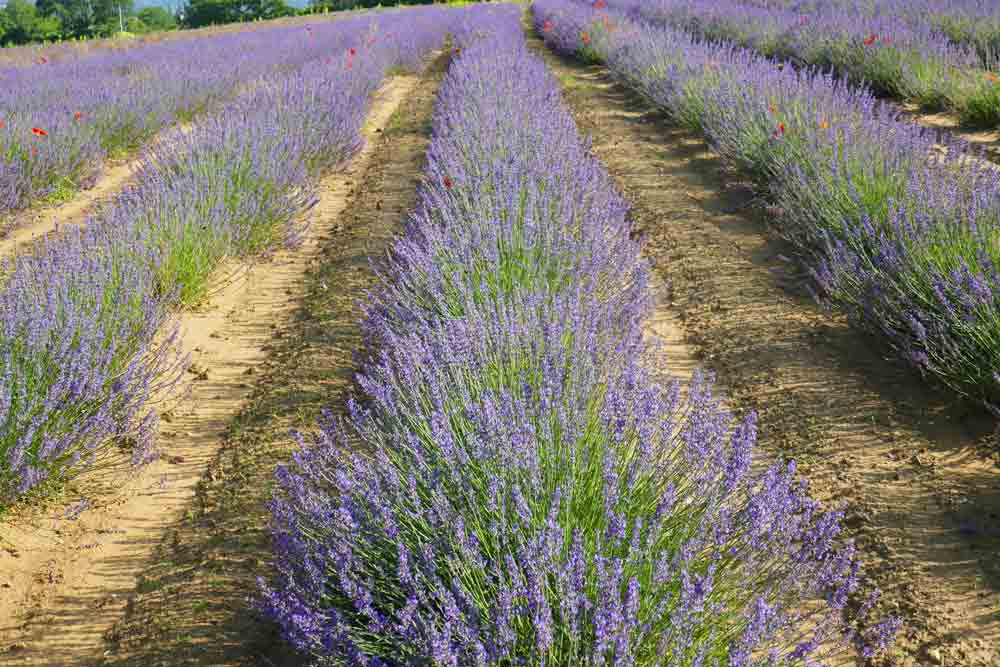 The quaint village of Saou is overlooked by white limestone peaks. One of these is Roche Colombe, part of the dramatic Synclinal de Saou.

We set off to the top of the 886m-high (2,907ft) Roche Colombe following a waymarked 11km circular route. The stony path was steep through oak woodland. With a few tricky scrambles, we were at the top, where we enjoyed open views and could see our entire route along the Drôme Valley as far as Jarjatte in the east.

Our pitch on the campsite near Le Poët-Célard had such a stunning panoramic view we struggled to tear ourselves away after we had finished our leisurely French breakfast of baguette and honey.

An easy circular walk around the hillside to Le Poët-Célard took us by a château of honey-coloured stone into woodland deep with beech leaves. This is the Huguenot Trail and there were occasional information boards about the persecution of these Calvinist Protestants.

During the walk, we found the old defensive gate and climbed the winding cobbled path to the hilltop castle to take in the extensive views.

The unspoilt Drôme Valley had enchanted me with so many uniquely French experiences and, once again, France proved to be a superlative place for a holiday.

This article was originally published in the June 2019 issue of MMM magazine - get a digital edition here. For more motorhome and campervan travel features, go here.