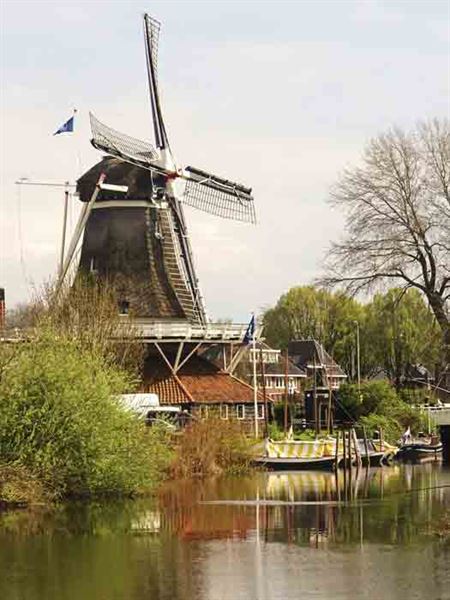 Nick Castle tours Holland and discovers a country that has far more to offer than clogs and windmills - including cheese, tulips, porcelain, lakes and spectacular floral parades...

As a schoolboy I was taught that much of Holland is reclaimed land sitting below sea level, that the sea is kept out by dykes and that the people live in windmills, wear clogs, make cheese and grow tulips. Is this fact and folklore still relevant? We went to find out.

Shortly after crossing the border from Belgium we were well below sea level as we plunged into the four-mile-long Terneuzen tunnel under the Westerschelde Sea, stopping for our first night in the university town of Middelburg.

Our first dyke was on the A57 across flat, sandy grasslands and past huge sluice machinery that periodically interrupts the high banking that holds back the sea.

We arrived in Schiedam where the camper stop is by a canal in the shadow of Holland’s tallest windmill at 33m (108ft). The bays are only 6m long, requiring us to reverse in and overhang the water!

Schiedam is famous for making jenever, a drink similar to gin. The Schiedam Jenevermuseum, in a former distillery, is where to find out about it. English-speaking guide Peter explained how rye, barley and yeast are distilled three times, raising the alcohol from five to 40% to produce malt wine similar to whisky. Adding juniper turns this into a drink more like gin. Of course, we finished our tour with a tasting session.

Delft, a few miles north, is noted for its distinctive blue and white porcelain. Royal Delft, established in 1653, is the last factory still producing hand-painted Delftware.

We watched women skilfully applying the decoration, which appears black, only changing to the famous blue when fired. The campsite in Delft offered discounted tickets for the factory and other attractions.

We went further north, passing fields of green stems but with no sign of the tulips, which needed a bit more warmth to bloom.

Near Slootdorp we found Camperplaats de Tulpentuin on a flower farm. Owner, Sandra Munster, told us we were 8m (26ft) below sea level, then took us into the enormous greenhouses and explained all about the eight million bulbs they process from March to July.

Between 80,000 and 100,000 plants are hand-picked daily in the greenhouses. A machine crushes the bulb, leaving a longer and more valuable stem and ties them into bunches, which are put in cold storage before collection to market.

In Holland, a lot of marinas offer motorhome parking. We stayed on a few, including the one in Meppel. It’s a small, pleasant town with a working windmill that is free to visit. This is one of only a handful that still mills domestic flour, which then is sold to visitors and local bakers. The owner told us that a blue flag means a windmill welcomes visitors and that the position of stationary sails can signal events like births and deaths, or secret messages in wartime.

A first glimpse of tulips 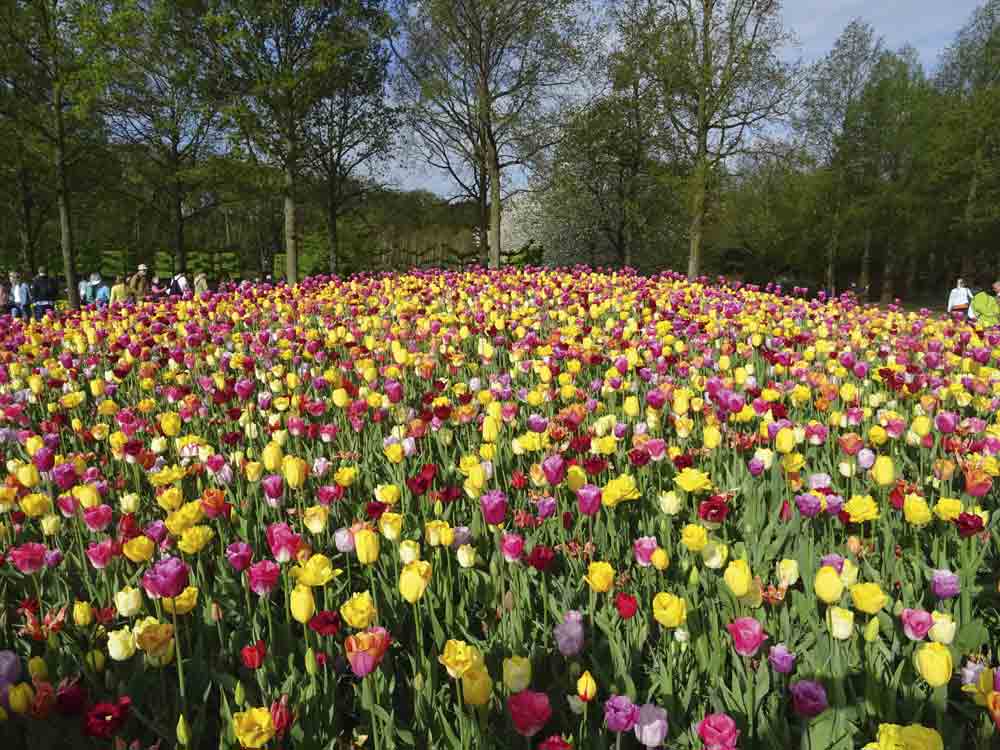 From Meppel we drove over reclaimed wetlands. The canals and lakes glistened blue, trees were turning delicate spring green and the reed beds were pale ochre. Reeds had recently been cut and piled into stooks. Then excitement as we saw our first tulip fields, long strips of yellow and orange stretching away from the roadside, bright in the sunshine. With windows down we could smell their sweet scent.

Our next port of call, Urk, was an island until 1939. The town has some of the quaintest houses we saw, many decorated with nautical artefacts. There is a moving memorial for Urk’s lost sailors; plaques around a wall showing their names, ages and boats lost each year.

The old harbour is a boat spotter’s dream with vessels of all ages, wooden hookers, bluff-bowed fishing boats and steam trawlers. 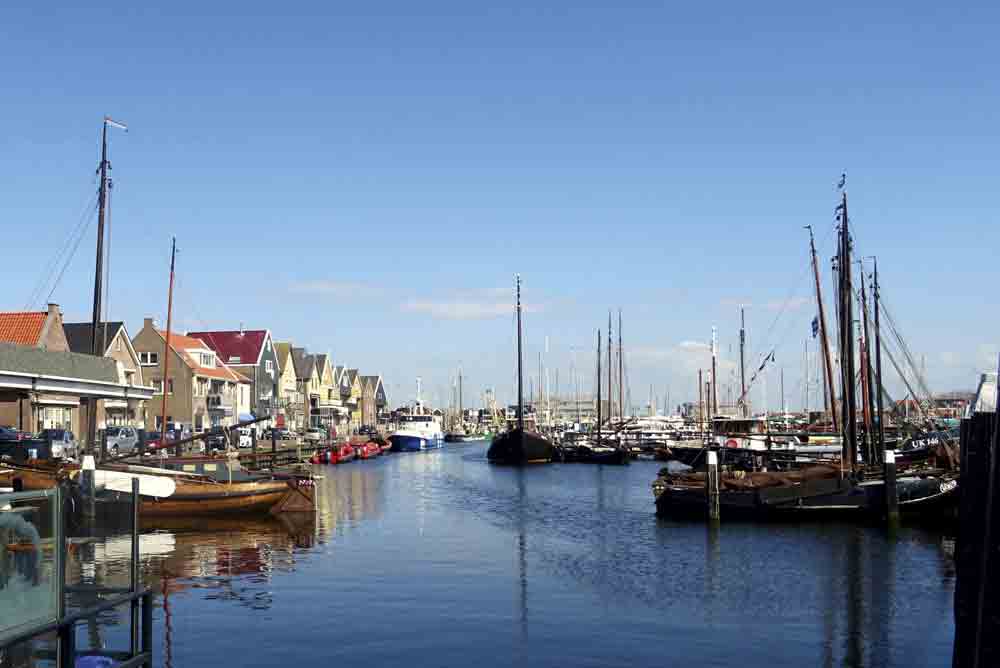 We meandered back through the town’s narrow streets, a walk known as de ginkiestocht, to the camperstop on the modern harbour.

In Urk we discovered a quirk that continued across Holland: neither pre-paid currency cards nor debit cards work in many shops. The Dutch use the Maestro card system, meaning Visa and Mastercard are not universally accepted, although they still work fine at ATMs.

At Lelystad we had to wait while a massive bridge was raised for a sailing boat and then we crossed and arrived at one of our favourite towns, Enkhuizen. The camperstop is right on the harbour amid rows of tall sailing barges. Two of them, crewed by school parties, came alongside with the kids chanting as they lowered sails and readied the mooring ropes.

At the smokehouse we sampled hot, oak-smoked salmon, delicious with its warm oils leeching out of the firm flesh. The museum is extensive and interesting and we’d recommend allowing a whole day to visit.

Walking back through town we were charmed by the window decorations and tidiness of the houses and, on our way along a canal, we watched a couple of courting grebes dancing with their heads. The 1605 bell tower, called Drommedaris, tinkled its bells as we crossed the little white skinny bridge back to the camperstop.

Our next camperstop was Simonehoeve, near Volendam. Ostensibly a souvenir shop, visitors are given a talk about cheese-making followed by a workshop demonstration of clog manufacture before entering the shop itself. A pretty 2km walk along the adjacent cycle path goes to Volendam, which is attractive enough but very touristy.

It was then time to see the flowers as the third Saturday of April is Bloemencorso Bollenstreek – the Flower Parade – which runs around Haarlem, Lisse and Hillegom to Keukenhof. We stayed at the Het Groene Hart campsite near Abbenes, about 8km (five miles) from the nearest parade route. Being too far for my wheelchair, we asked the site owner to arrange a taxi, which we shared with another couple. 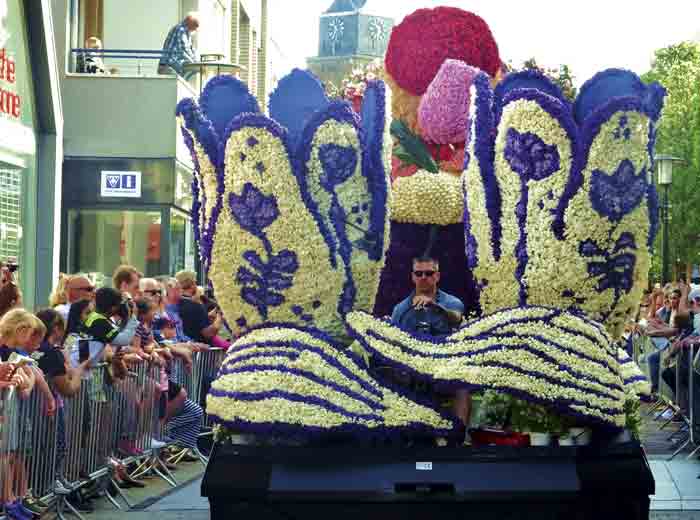 The carnival was stunning. Over 60 vehicles, from a moving bouquet of lilies completely obscuring the little Fiat beneath, through to vans and tractors bedecked with colour. The most impressive were the praalwagens – 18m-long floats with massive floral sculptures of temples, spacemen, dragons, elephants and other themes constructed entirely from blooms.

Het Groene Hart was convenient for two other attractions, the Museum De Cruquius and Keukenhof Gardens. No amount of words can adequately describe Keukenhof Gardens, other than vast and spectacular.

The flower beds spread for miles, the perfumes are heady and pink blossom fills the trees. Probably the best flower show in the world, it only opens for five weeks a year so it’s important to time your visit.

An hour away is Gouda, which holds a cheese market on Thursday mornings. Rows of cheeses are lined up in the town square forming a yellow aisle from the ornate Town Hall to the Weighing House. Horses and carts arrive with gangs of boys ready to load them. Girls in traditional dairymaid outfits hand out tasting samples. Then the buyers in clogs, neckerchiefs and caps meet the sellers, dressed in white coats, to trade.

We followed a suggested walking route around Gouda, beside quiet canals, crossing bridges decorated with flower boxes, passing houses with heavy ornamentation and studying old working boats moored at the museum. We finished the day with a sumptuous meal at the De Zalm Hotel.

So, were my schoolboy impressions of a reclaimed land of dykes, tulips, windmills and clog-wearing cheese-makers still valid? Well, yes, but there’s so much more to the Holland than that.

This article was orginally published in the March 2019 edition of MMM magazine. To read the full version, buy a digital issue of the magazine here.