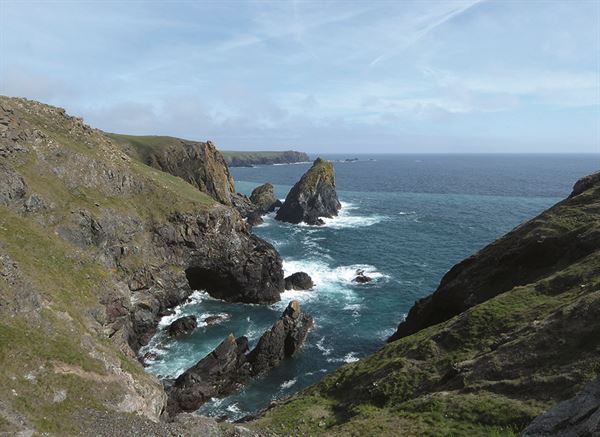 My husband, Barry, asked whether I would be taking my dowsing rods when we decided to revisit parts of Cornwall we’d not seen since we had children in tow.

The Lizard Peninsula called, as did some of the stone circles and ancient sites in this part of the country. I dug out old books on ley lines and mysterious Britain and bought a copy of The Sun and the Serpent, which tracks the St Michael Line eastwards from St Michael’s Mount to Hopton on the Norfolk coast. The plan was to visit some sites and old churches on the line in Devon and Cornwall, interspersing this with cream teas, pub lunches and coastal walks. And I wasn’t planning to take my dowsing rods! 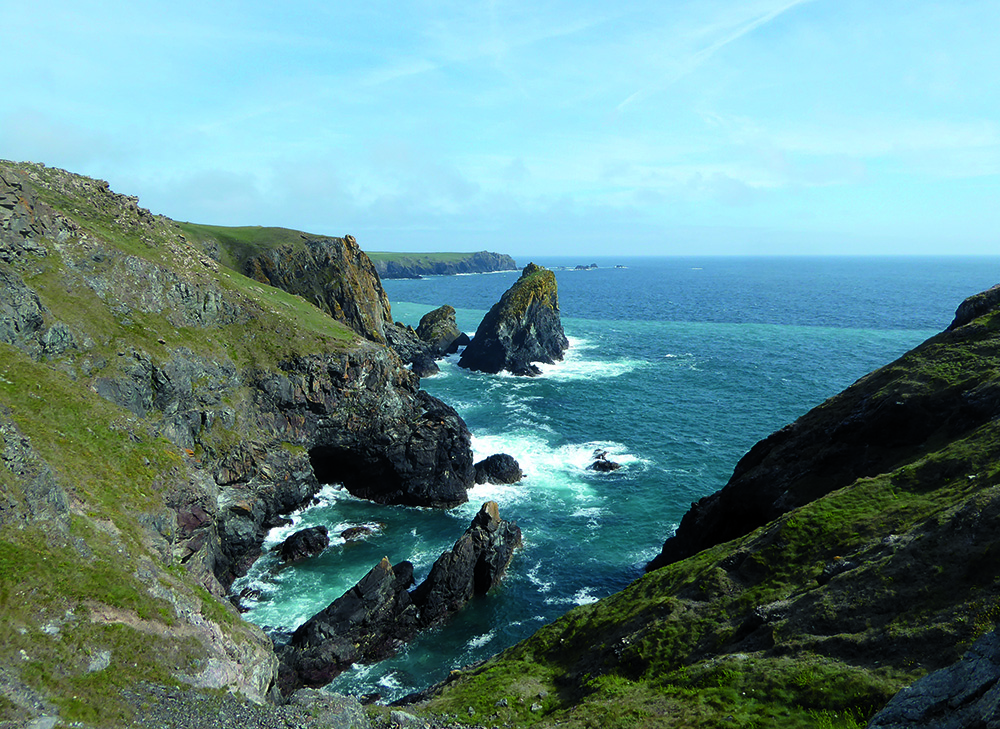 In the late 1980s, dowsers, Paul Broadhurst and Hamish Miller, travelled along the St Michael Line exploring a countrywide alignment of sites dedicated to St Michael, many of them on high ground. Researchers into ancient mysteries, they tracked the serpentine earth energies that weave across the country close to the St Michael Line.

During their explorations they followed the dominant ‘Michael’ energy line, but discovered a second sinuous energy line that led them to lower ground, old holy wells, watery places and churches dedicated to St Mary. Where this line, which they named ‘Mary’, intersected with ‘Michael’ they formed a node; many well-known sites, such as Glastonbury Tor and Avebury, are at such places.

After calling on our daughter in Cheltenham and stopping off in Ivybridge for our campervan’s annual check-up, we headed for Lydford Gorge (NT) on the St Michael Line, at the southern edge of Dartmoor. The gorge, a short leg stretch from the pleasant campsite in the village, is a spectacular haven of green, vibrant nature to walk through – even in rain! Where it narrows we picked our way carefully over slippery and uneven rocks, thankful that we’d remembered to bring hiking sticks.

The dramatic White Lady waterfall and Devil’s Cauldron were in full spate. Passing swathes of bluebells and wild garlic, we spotted violets and wild orchids by the paths and watched a pair of grey wagtails on the River Lyd way below. South of Lydford is St Michael’s Church at Brentor, also on the line. There is parking at the foot of the hill and the walk to the top offers great views. The church is simple and peaceful; the setting dramatic. Below the hill, the Michael and Mary energy lines meet and form a node, then snake away to the north. 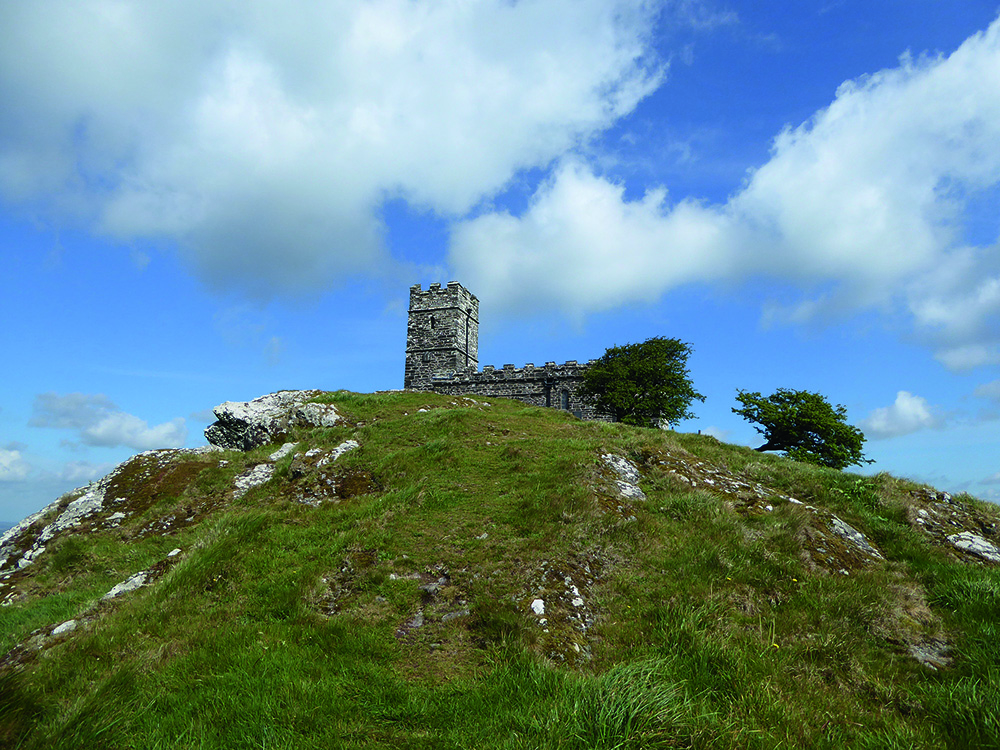 Heading for ancient sites in Cornwall

We turned south into Cornwall, making for Bodmin Moor and The Hurlers. This group of three stone circles, close to the village of Minions, was easy to find. With a large car park, signposted paths to the ancient sites and an information centre housed in an old tin mine building, it was a popular attraction. As we walked to The Hurlers, I was drawn to the middle circle, which had a small upright stone in the centre. It was only later that I discovered that this was where both the Michael and Mary energy lines meet.

With thumbs twitching, I headed off across the open moor towards the Cheesewring, which the Michael energy line runs through. Set high on a craggy hill, it was just as well as I’d not brought the dowsing rod. The wind was too strong for any fine tuning and nearly lifted me off my feet as I climbed to the top. The Cheesewring is massive, mighty and magnificent. Standing beneath this towering haphazard pile of huge flat stones, we couldn’t begin to imagine how the whole thing had been constructed.  Legends say it was the dwelling place of a druid who had a golden cup full of inexhaustible contents.

Walking back to the motorhome we passed a group of wild ponies, many of them with foals, then headed towards St Cleer to find Trethevy Quoit, the largest megalithic structure in Cornwall. On a sunny day, it was a pleasure driving along country lanes lined with colourful bluebells, yellow buttercups and red campion. The lanes are quite narrow and twisty, with passing places. Our motorhome was fine, but driving has to be cooperative and careful. 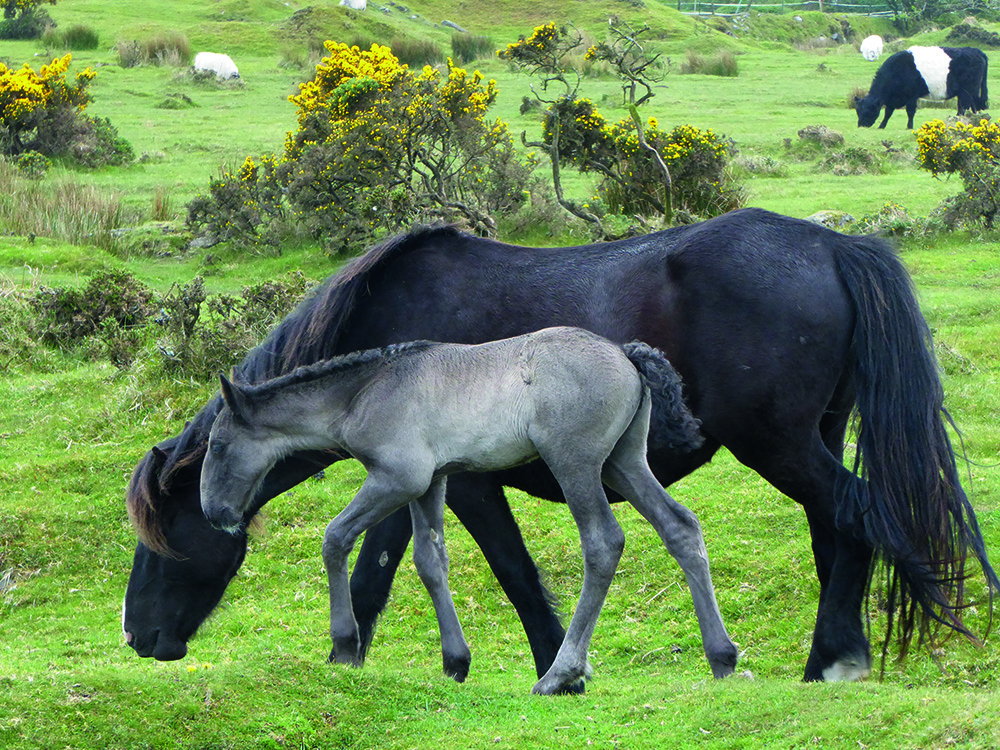 Trethevy Quoit is in the small hamlet of Trethevystone, signposted and with layby parking. Set dramatically on a small rise, it’s impossible to miss as it suddenly appears over the hedgerows. It overlooks the confluence to two streams, which become the River Seaton. With water so close, I suspected the Mary line would be nearby. Sure enough, the intrepid dowsers of the 1980s found that it flows right through this Neolithic tomb. Six huge stones support a seventh, the capstone, which tilts at an alarming angle. We marvelled at its construction and size before setting off for the Roseland Peninsula and Trethem Mill Touring Park.

Once there we hunkered down in the motorhome to read while drenching curtains of mizzle and low cloud folded themselves around the Roseland. The sun reappeared the next day and we walked on footpaths from the campsite across nearby fields to St Just in Roseland Church. No ley or energy lines here, just a tranquil thirteenth century church on the edge of the river, with its own holy well and lush subtropical gardens.

We took the motorhome to Trelissick House and Gardens, crossing the Fal River on the King Harry chain ferry. There is ample parking and the gardens are beautiful. Glendurgan Garden, near Falmouth, is equally pleasing but less formal. 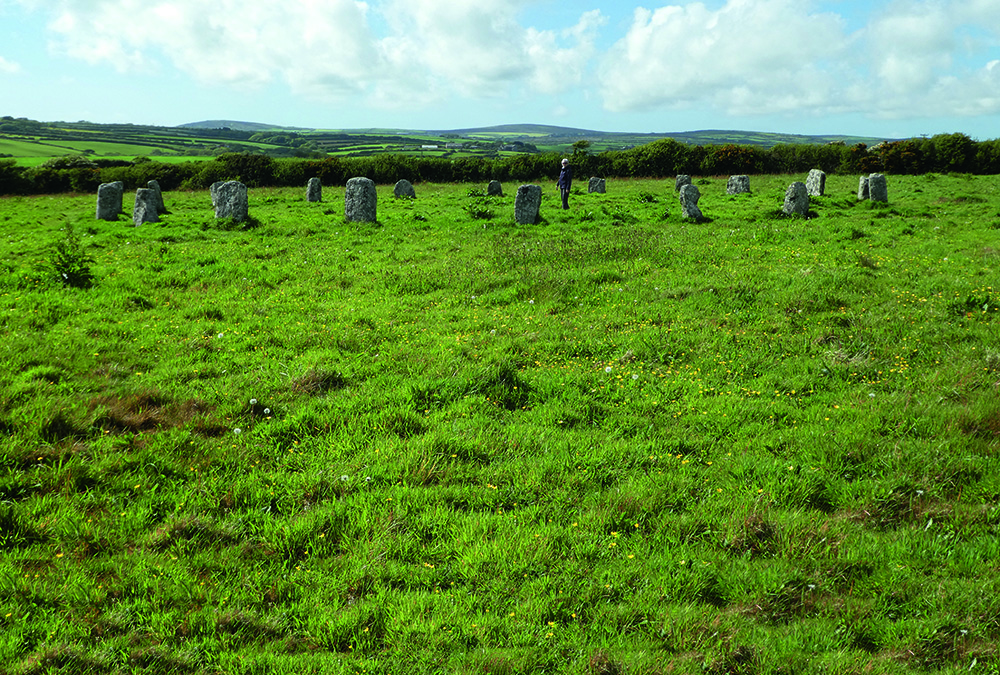 Moving to Carnon Downs Caravan Park gave us an excellent base, allowing easy access to other places we wanted to visit. In a park-like setting, with a bus stop and general store a short walk away, we had the option of taking the motorhome off site for day trips or taking the bus into Falmouth or nearby Truro for a spot of grockeling (people in the West Country call tourists ‘grockels’).

Truro is an attractive small city with good shops, a Victorian gothic cathedral and the Royal Cornwall Museum, where we learned about Cornwall’s history. Discovering that the parish church of St Mary’s, dating from 1259, was incorporated into the fabric of the cathedral when it was built, I was curious to see if there was water nearby. Sure enough, the River Truro snakes alongside the cathedral precincts. The cathedral is pleasant and interesting; we enjoyed a free lunchtime orchestral concert and ate in the cathedral restaurant, which serves “good food, not fast food”.

We explored the area around Penzance and Land’s End, following the northern coast past St Ives Bay. The land here has many ancient burial chambers, none of them on the St Michael Line, but was clearly an area of significance in Neolithic times.

At Cape Cornwall I was hoping to see some choughs. Breeding pairs have returned to Cornwall’s cliffs since becoming extinct in the 1970s. As we drove into the National Trust car park I asked the attendant if there were choughs about. She obligingly impersonated their call (miaow-like) so we’d recognise any that flew over.

Cape Cornwall, unlike Land’s End, is uncommercialised. Rising 226ft above sea level and topped with a tin mine chimney, you can choose an easy or steep path to the top. We took the easy route, pausing to take in views of the Longships Lighthouse and the Brisons, part of an underwater reef responsible for many shipwrecks.

Moving on, we stopped at the Merry Maidens stone circle near St Buryan. It was full of dowsers, which brought a smirk to Barry’s face. They left just as we made our way into the circle, so we had it to ourselves. I was happy to quarter the circle, hands tingling and fingers twitching as I sensed the energy. The Merry Maidens are connected to the main Michael/Mary lines by a ‘branch line’. These are, supposedly, maidens turned to stone for dancing on the Sabbath.

There was one more place to visit: St Michael’s Mount, the site of a Michael/Mary energy node and the starting point of the St Michael line crossing the country. As it was later in the day, the mount was closed for visits and the tide covered the connecting causeway. I was content to view this iconic island bathed in early evening sunshine and recall some of its legends.

Then it was time to respond to the call of The Lizard. As Britain’s most southerly point it’s an Area of Outstanding Natural Beauty, profuse with wild flowers. Heading for Lizard Point, on narrow winding roads with passing places, the trees and hedgerows were sculpted into weird shapes by prevailing winds. This area has a different feel. It’s a special place. No energy lines, no ley lines, just nature.

We look at a problem panel van converters are having with the DVLA ... 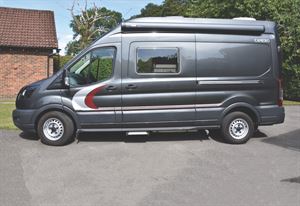 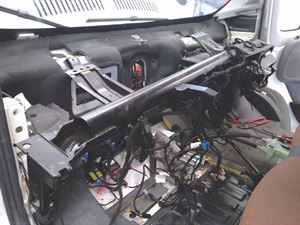 Problems with your motorhome or campervan? You've come to the right place – our experts answer your tech ... 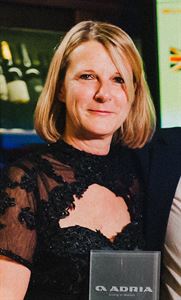 A brand that has significantly increased its UK dealer network and launched a range of all-new models, so ... 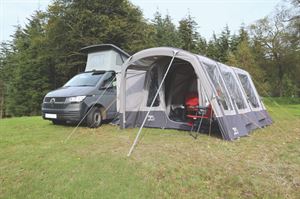 A guide to motorhome and campervan awnings

Awnings can provide valuable extra space for smaller motorhomes and campervans, or even just a shelter for ...

A family-run company that’s been building campervans for over 30 years, we caught up with Director, Sam Shortland, for the full lowdown… ... 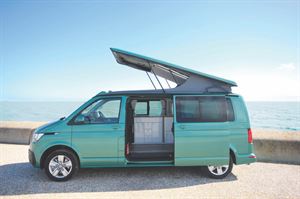 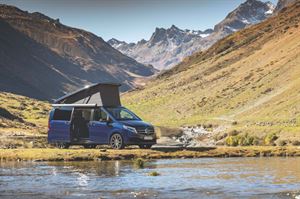 Looking for a different option to Volkswagen’s famous Cali? Here are some of the best other campervans out ... 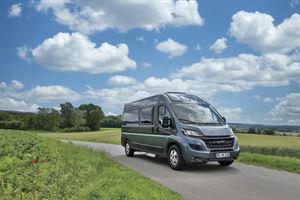 Pop-top, high-top or high-top with a pop-top? We explain the different types of campervan on the market ... 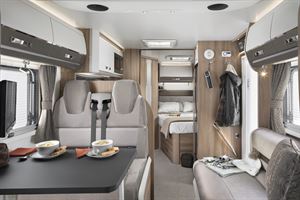 A guide to motorhome and campervan layouts

Crucial to buying the right motorhome is choosing the right layout. Get it wrong and you’ll soon be looking ... 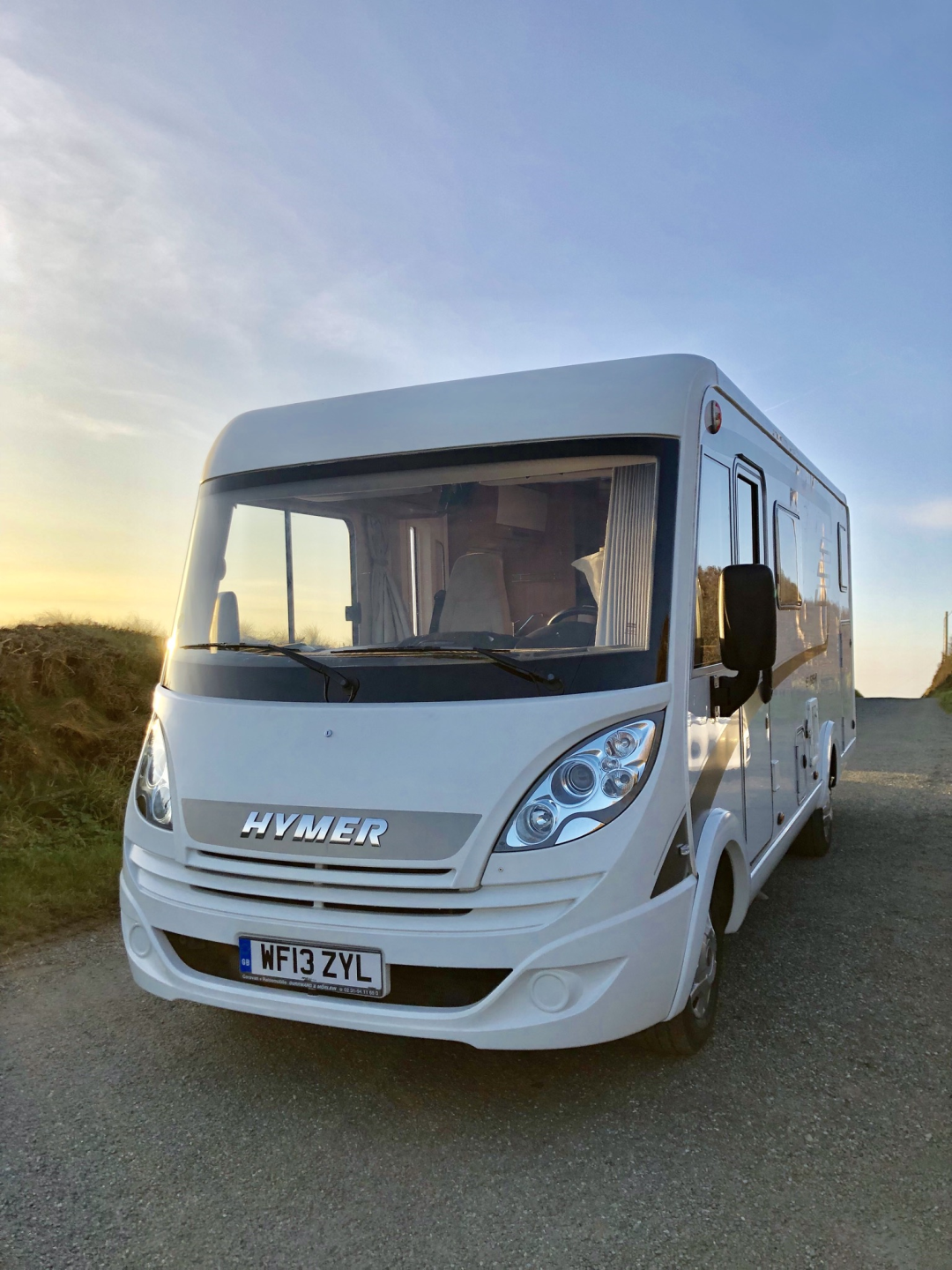