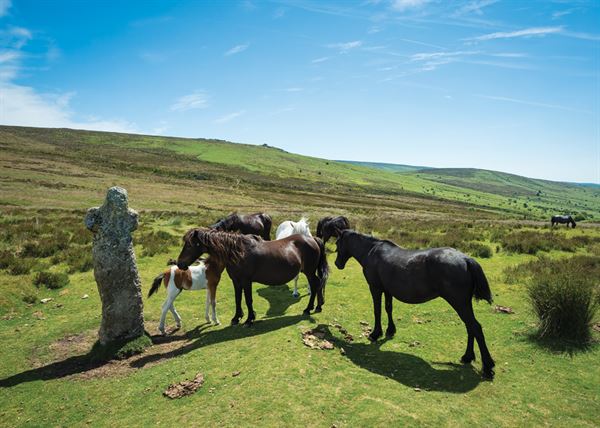 Dartmoor is visited by about 11 million people each year, but you can escape the tourists to find extreme beauty, peace and quiet if you know where to look. 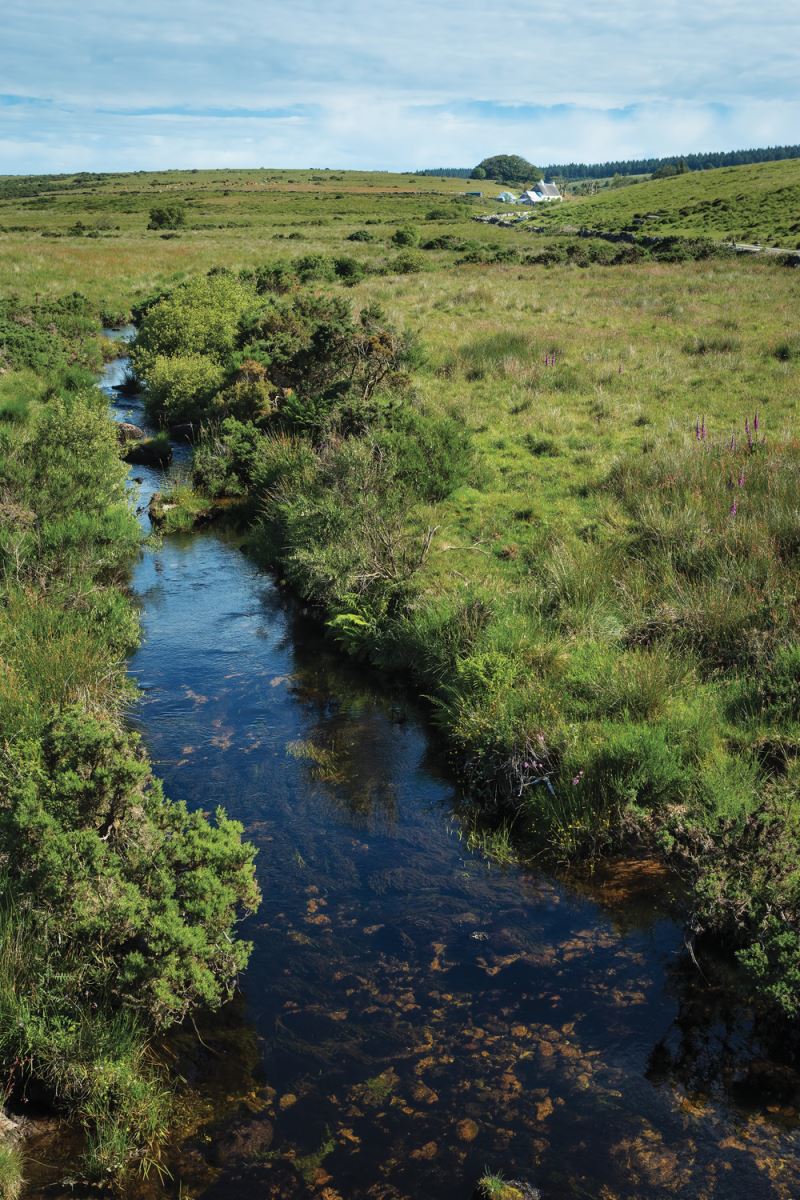 I wanted to explore, savour and digest every morsel that Dartmoor could offer me starting at Dartmeet, which is a great location for wildlife. There is a car park at Dartmeet, which is easily big enough for Isla (our motorhome), a tea room/restaurant (Badgers Holt) and an old dilapidated clapper bridge. This place gets its name (as if you haven’t already guessed!) because the two Dart rivers, East and West, meet here.

Our walk north, from just behind the café, opened out to a large expanse and it felt a little bit like walking through the wardrobe into Narnia. In the southerly direction, the walk hugs the river and led us to the Dart Valley Nature Reserve, the largest of Devon’s nature reserves.

Here, my wife Bridget and I had sightings of a male mandarin duck on the river and house martins, swallows, bullfinches and mistle thrushes on the moorland. We also saw numerous butterflies, including green hairstreak, comma, silver-washed and high brown fritillaries. I enjoyed this reserve so much that I will definitely be returning for a much longer visit. 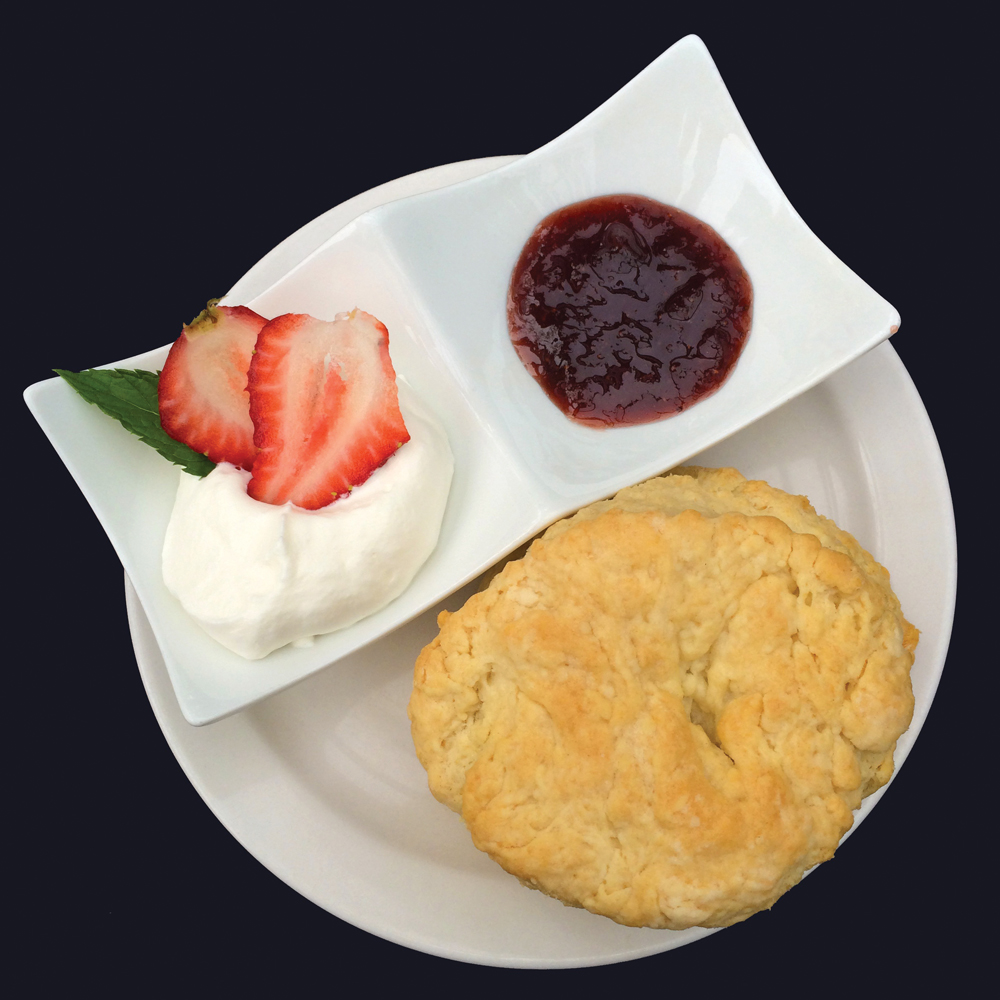 We moved on to the Two Bridges Hotel, which was a good place to enjoy a Devonshire cream tea whilst sitting outside near the river. Just across the road is the very atmospheric Wistmans Wood.

This is a high-altitude oak wood that is amazing to see because mosses and lichens festoon all the trees and the granite boulders within it. Wistmans Wood is such a beautiful place to visit and photograph, but I think it’s also rather bizarre!

Returning to Isla, we drove to the hamlet of Merrivale; granite from its quarry was used to refurbish Tower Bridge. Walking uphill we were greeted by several Bronze Age megalithic monuments, including stone rows and circles.

Merrivale is a huge prehistoric settlement in a very open area. The experience was very thought-provoking, making me wonder what ancient people used to do here – and why. 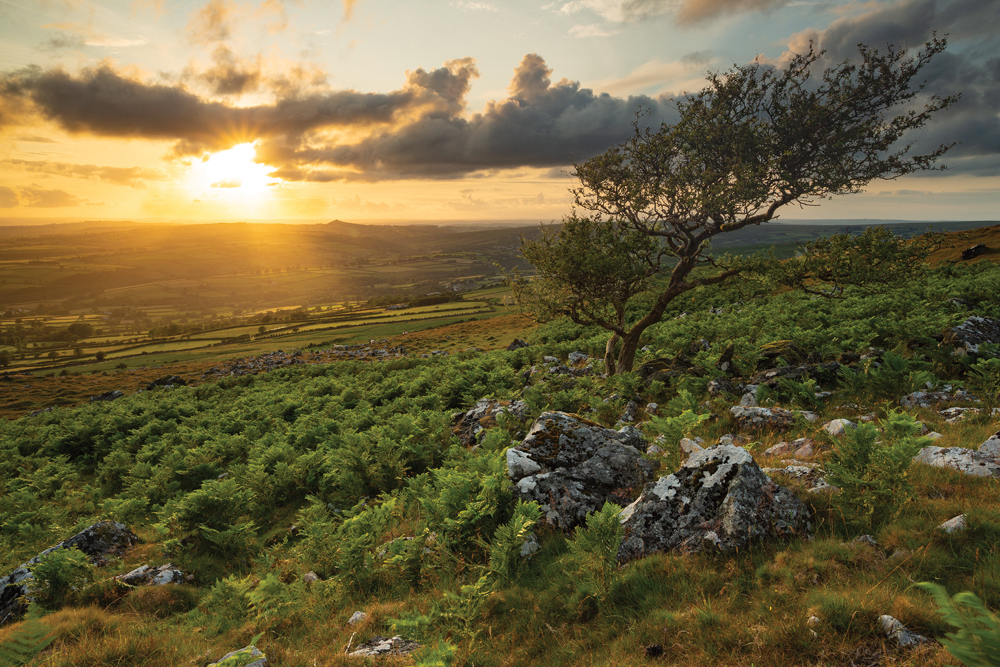 Another good area for wildlife was at Pork Hill car park, opposite Cox Tor (better either early in the morning or late evening as it gets really busy during the day). This is open moorland dotted with gorse and lumps of granite and has a vantage point from where you can see the town of Tavistock in the valley.

There are some marvellous opportunities for landscape photographers around these parts, including Vixen Tor, Pew Tor, the Staple Tors (Little, Middle and Great) and the ancient Windy Post granite cross next to a leat (watercourse). The Windy Post was a marker for the Abbots’ Way, used by monks to cross the moor between abbeys. 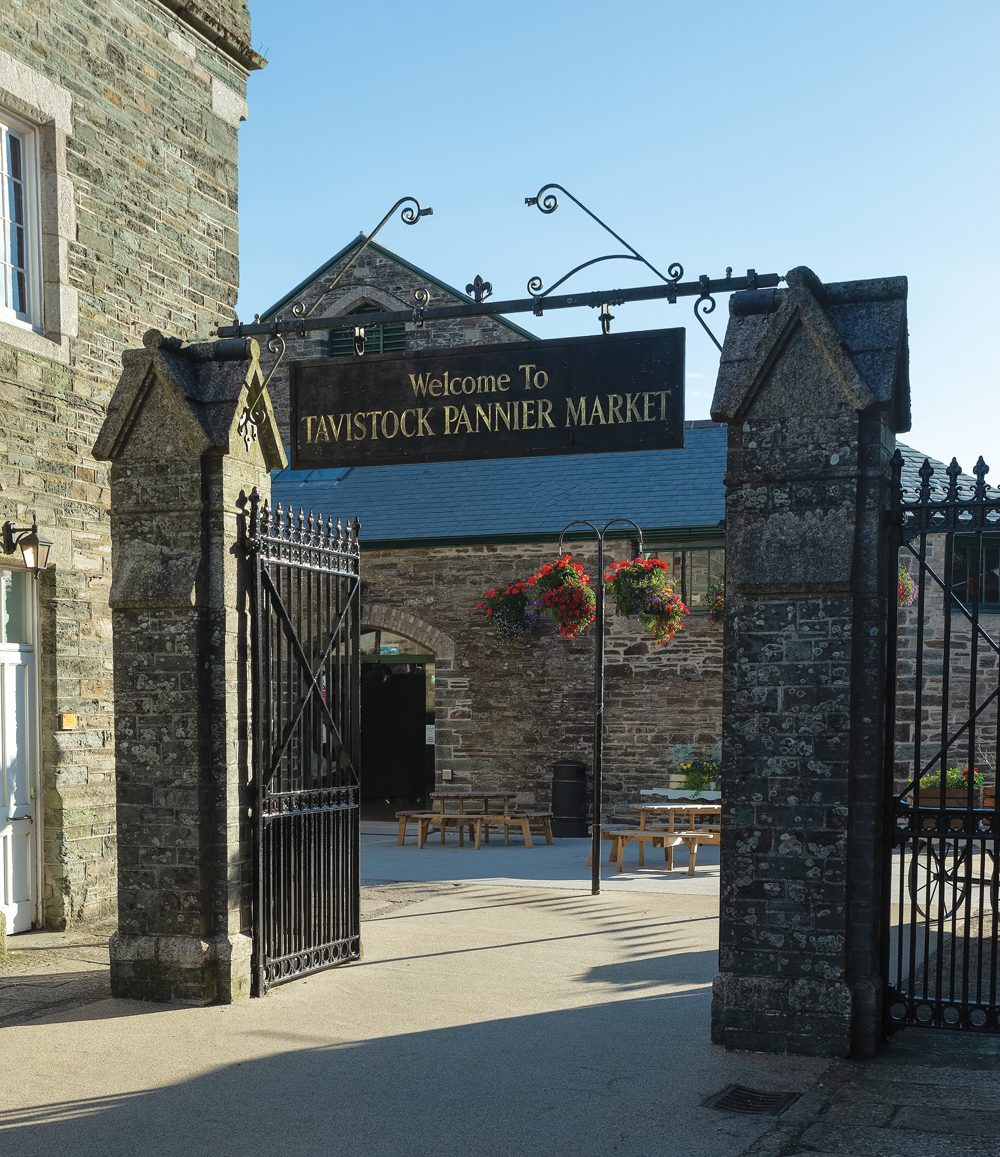 The ancient stannary (a region that refined, assessed, coined and sold tin) and market town of Tavistock has interesting artisan shops and the shopper’s ‘paradise’ that is the pannier market – such a refreshing change from today's typical high street.

The heart of the town has some fascinating buildings, including the ancient parish church (which traces its history back to 961), The Bedford Hotel which was built in 1822 (somewhere for another of those Devonshire cream teas) and the town hall (1864), which dominates the main square.

On the way to Yelverton, we parked at Horrabridge and walked to The Famous Chippie, eating our very tasty lunch whilst sitting next to the river.

Yelverton is on the edge of a redundant WWII airfield at RAF Harrowbeer and we walked around the open grassland noticing the open bays with earth and brick banks, where fighter planes would have been ‘parked’. Once again, the visit had me wondering what it must have been like here during the war with people and machines everywhere. 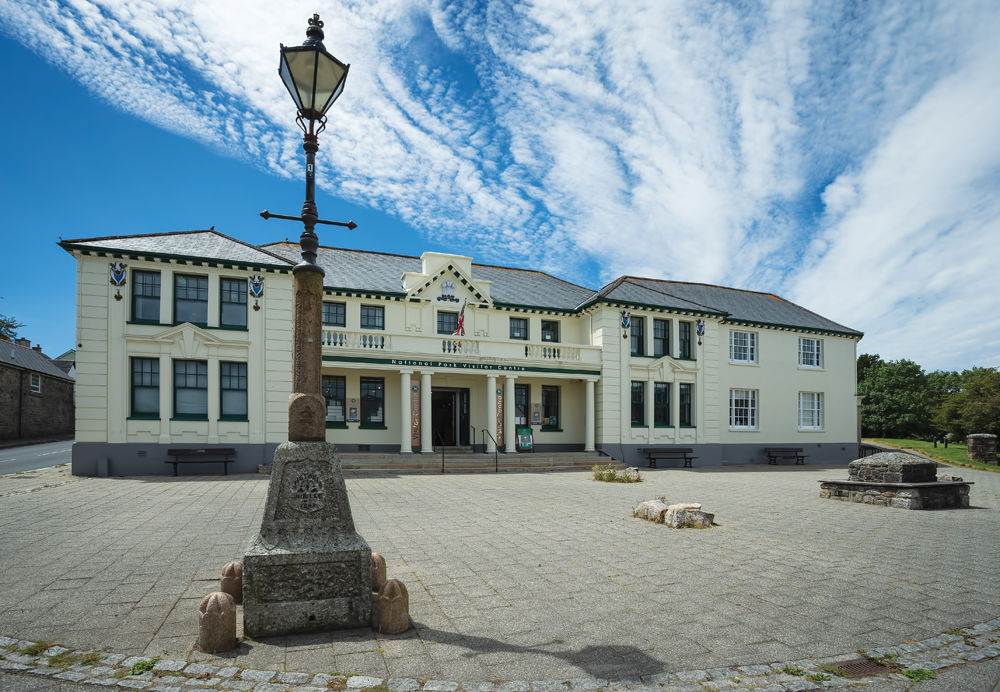 We left Yelverton for Princetown, which is not just famous because of its grim and unfriendly prison that was built during the Napoleonic Wars, but also for being the place where Sir Arthur Conan Doyle found his inspiration when writing The Hound of the Baskervilles.

Parking in the Station Cottages car park (just off the B3357) we visited the National Park Visitor Centre, located in the old Duchy Hotel where Conan Doyle stayed and wrote his famous book.

A leaflet – for the Hound of the Baskervilles trail – is available to follow in Conan Doyle’s footsteps. The Sherlock Holmes display (including the ‘hound’) was an enjoyable and interactive journey exploring Dartmoor’s fauna and flora (free of charge).

Later, in the prison museum, we learned about the jail’s 200-year history and read stories about the prisoners and the tools used to control unruly inmates – and about some of the escapes, too! 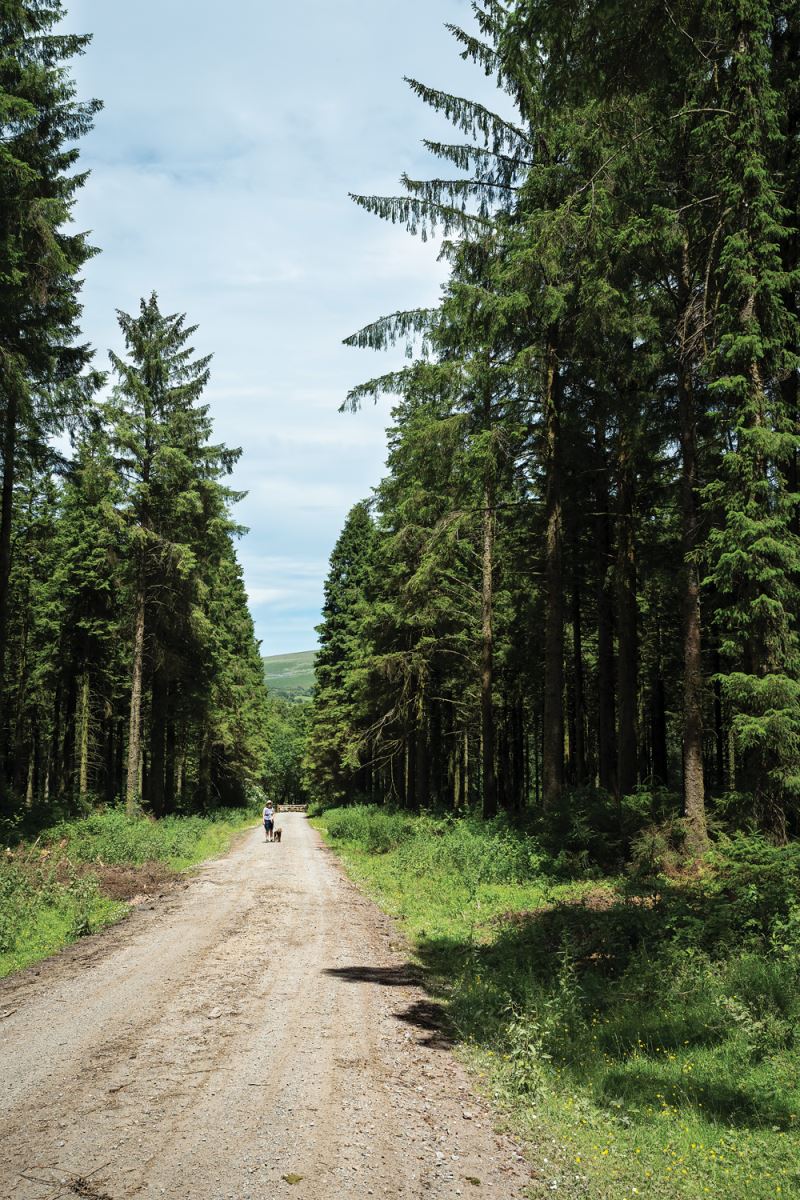 Postbridge and the National Park Visitor Centre was next, to see the small exhibition about the excavation of the Early Bronze Age burial at Whitehorse Hill (north of Postbridge) and to see replicas of the finds. There is also a more complete clapper bridge, which dates back to the 13th century, at Postbridge.

It’s a good starting point for walking in nearby Bellever Forest. As it was very hot, we thought the forest would give us shade, but we were wrong as the sun was directly overhead and poor Murphy (our dog) succumbed quite quickly.

Returning to the river and after dipping our toes, we moved on to the mid-19th century Warren House Inn, the highest inn in southern England (1,425ft above sea level) and owned by the Duchy of Cornwall. From this lonely and isolated moorland inn we went for a walk around Soussons Down, a plantation in a valley.

It was much cooler here and another super place to spot wildlife, including willow warblers, chiffchaffs, greater spotted woodpeckers, jays, linnets and goldfinches. We were told that crossbills reside in the wood, so I set off with my camera at quite a pace, just like an excited schoolboy let out to play. I had to give up my search after a few hours to return to my wife and Murphy, both of whom had given up ages before!

Further on we visited The Miniature Pony Centre and, no, you cannot put one in your pocket to take home. It was lovely watching the ponies cavorting, the foals only just bigger than Murphy.

In Moretonhampstead, we dropped into the Green Hill Arts, a gallery with free admission and well worth a visit. Due to on-road parking, at times it was quite a squeeze for Isla to get through; likewise on the A-road to Bovey Tracey as, in places, it was a single-lane track. But that’s Dartmoor’s roads for you.

At Bovey Tracey, there is an extraordinary shop called House of Marbles (free). We were soon engrossed in marble runs of all sizes, fairground mirrors and a penny press, but also a quirky ‘historic’ trail around glass, games (and marbles!) and on-site kilns.

We whiled away a few fun hours, enjoying a delicious meal in the restaurant. Luckily, Murphy was allowed in the conservatory part of it.

Heading back towards Widecombe in the Moor along the B3387, we stopped at one of Dartmoor’s well-known tors, Haytor.

Walking to the top doesn’t take very long at all, but the view – although a bit hazy – was awe-inspiring, right across Dartmoor and south Devon.

Just down the road is a Devon Wildlife Trust site, Emsworthy Mire.

It’s a sloping valley that leads you down to the ruins of an abandoned moorland farm; the barn is still present with its bright red roof.

This nature reserve is a great introduction to Dartmoor  devonwildlifetrust.org/nature-reserves/

We saw redstarts, marsh fritillaries (quite rare) and had a wonderful view of a hunting barn owl, which was exciting.

Widecombe in the Moor

Finally, we reached Widecombe in the Moor. After ambling around the charming village and visiting The Smithy, which sells fine ceramics, we came upon a National Trust property, the Church House, that dates back to 1537. Church houses were built to accommodate parish festivities and to brew ales for public feasts.

With this in mind we walked the few minutes to The Rugglestone Inn, where a pint of beer was most welcome.