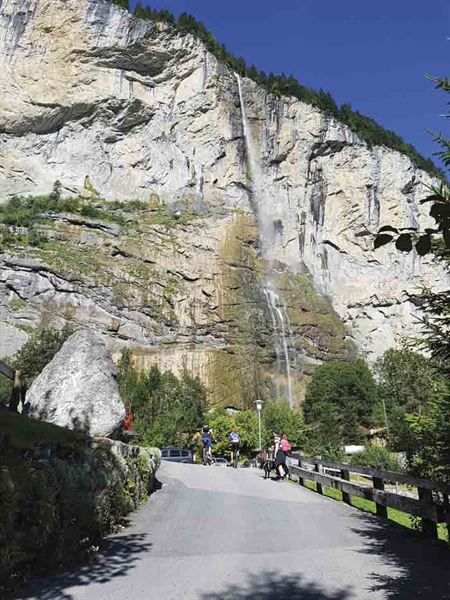 For those of you that have read my previous article about converting a Vauxhall Movano panel van into an off-grid camper (see July issue of Campervan), you will know that this trip was booked as the deadline for getting the campervan finished!

With the ferry booked, campsite confirmed and the campervan complete, we decided to give the freshly converted camper a quick run up to the Peak District for a couple of nights before embarking on the 1,500-mile round trip.

Everything worked just as planned and the cold, wet tent holidays were now a distant memory. That Friday, we double-checked everything was packed and triple-checked the passports before heading down to Dover for the Saturday morning ferry.

As we were travelling with three young children, our intention was to stop overnight at Stop 24 service station at Hythe – I can confirm this was a welcome site after battling the usual M25 Friday night chaos!

We pulled up around 7pm and the versatility of having our camper was already paying off, as the kids were straight into their bunks and out like a light while we popped on the kettle and enjoyed a brew and a pre-holiday chill.

With a 4am crossing, the alarm soon came round and the children, with it being their first time on the Continent, were like coiled springs! We headed down to the DFDS terminal, which is a 20-minute drive from Stop 24. We made it through the checkpoints in no time and boarded right on time – one tip is that seating was very limited. If you’re travelling with a family, take a coolbag and a packed lunch, as the food on board is quite pricey.

Two hours later we docked at Dunkirk and hit the French motorways with only one plan in mind: to take in as much scenery as possible and avoid the toll roads. Our route was fairly straightforward – even missing out the tolls – taking us around Brussels before heading to Luxembourg. By this time it was rapidly approaching lunchtime and we were all ready to try a local service stop.

Instead of the fast food joints we’re used to in the UK, it was refreshing to instead find fresh deli sandwiches and every sweet pastry imaginable!

From here, we headed on down towards Nancy then through Colmar before entering Switzerland via the checkpoint at Basel. For those that haven’t been to Switzerland before, at this point you have to purchase a local road tax (Vignette) in the form of a small sticker for your windscreen at the cost of 40 Swiss francs (CHF), which isn’t bad considering it lasts a year.

After a couple more hours driving and battling a lot of traffic around Bern due to an accident we decided to call it a night – everyone was tired and we only had about 25 miles left of the journey. So the nearest service station was found and the sleeping bags were out. 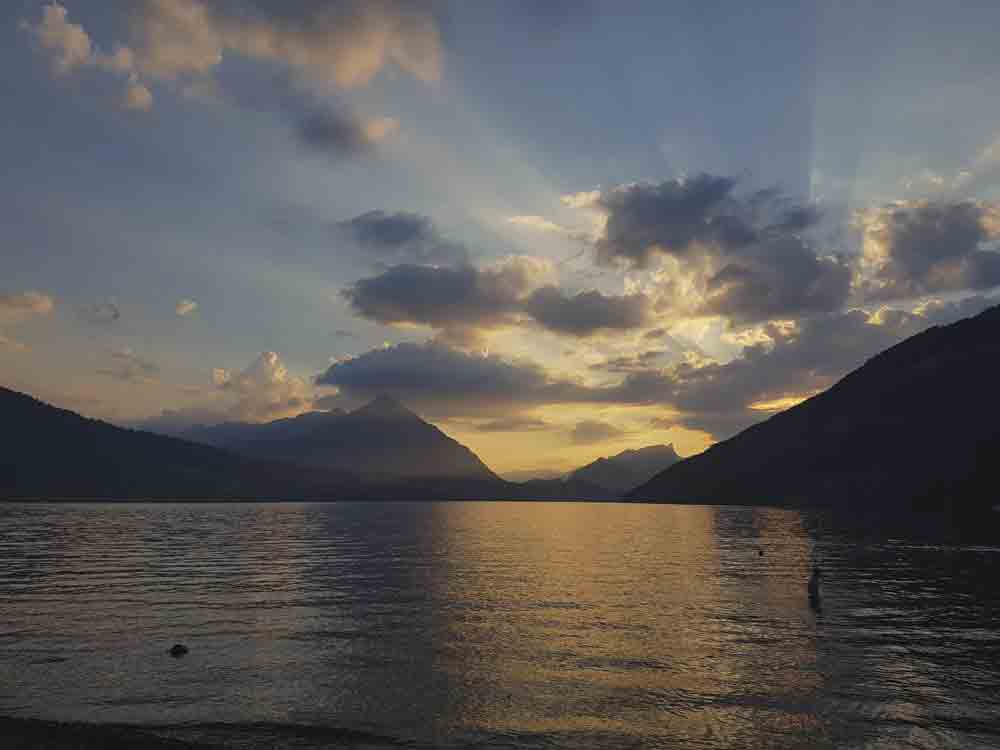 Early the following morning we woke to the most amazing smell – the service station café was already open and in full swing selling fresh croissants and a local dish of rösti, fried eggs and smoked bacon. This soon became our meal of choice along with chicken schnitzel, which is simple but delicious.

With all the excitement we had not really taken in where we had pulled up the night before. The rest stop was opposite Lake Thun (pronounced ‘toon’ by the locals) and the bright blue water, surrounded by mountains and untouched by modern buildings, is simply breathtaking! After we’d taken a million photos of the view, we continued our journey, eager to reach the campsite.

The final leg of the journey took us around Lake Thun before turning off towards Lauterbrunnen via the Grenchenstrasse, which is a narrow twisty road that follows the river all the way to Lauterbrunnen. Around every turn was another amazing view to try and take in whilst trying to still concentrate on driving, and the kids were literally bursting at the seams – they couldn’t wait to get out and explore.

For anyone who has visited Camping Jungfrau in Switzerland, they will tell you that this place has got to be one of the most picturesque campsites in the world! Surrounded by snow-capped mountains (even in summer) and hundreds of waterfalls with the powerful sound of the river raging along the side of the campsite, this was home for two weeks. 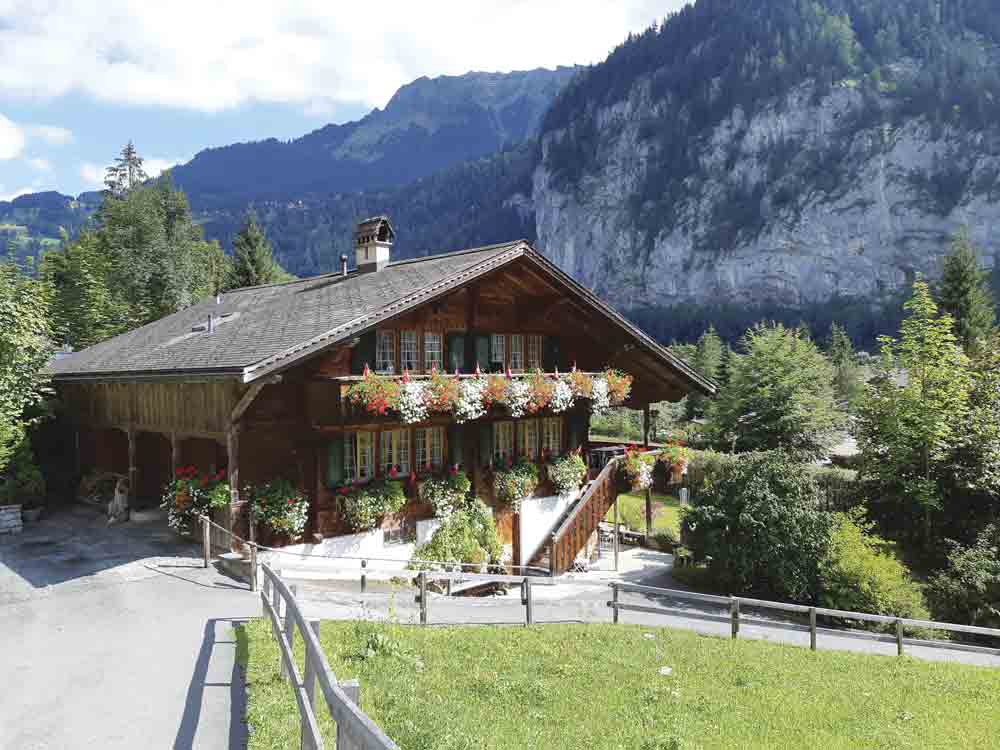 We were all excited to get started on exploring the area so, after pitching up, we headed into Lauterbrunnen, which is only a 10-minute stroll from the campsite, and stumbled upon a lovely little café called Flavours. This place sells everything from sandwiches to freshly prepared burgers and stone-baked pizza – everything was artisan and delicious but be under no illusion when travelling in Switzerland… even a snack with children is going to cost around CHF50 (about £40) but that’s what holidays are for, isn’t it? Especially with the cost saving of living in a campervan for two weeks!

After that we went to explore around the campsite. Camping Jungfrau caters for everything with a play park including a bouncy castle, on-site shop and bar and superb family rooms and toilet facilities. Every Friday during summer has the added extra of a local celebration including beer, dancing and a local delicacy called raclette, which is a huge piece of cheese melted under a grill then scraped off onto crusty bread and served with a gherkin. Yum.

From campsite to cable car

On arriving in the Jungfrau region it was our intention to take the train up to the Jungfraujoch mountain. We soon realised with five of us this is super expensive, so we opted to hop on a few separate cable cars and make our way to the Schilthorn Piz Gloria, which many of the James Bond scenes for the 1969 film On Her Majesty’s Secret Service were filmed.

From the campsite it’s around a 30-minute walk along the river to the first cable car station at Stechelberg. Here we jumped on the cable car to the first changeover point in the village of Mürren, at an altitude of 1,638m (5,374ft)!

as it’s very high, but to our amazement, Mürren is not a scary cliff edge of a mountain but a fully functioning village with bars, restaurants, shops and even a full-size football pitch! You get no sense of height in Mürren – it’s like walking around normal streets back home with the addition of breathtaking views.

After a look around Mürren we continued to the next stop, which is Birg at around 2,684m (8,806ft). Even here you get out onto well-maintained paths surrounded by railings and even a small café, before heading onto our final stop, the Schilthorn. We took the thrill walk around the Birg, which is a short walk made up of glass floors, wire rope bridges and even a small mesh tunnel to crawl through at the end. It’s very surreal seeing the cable cars come up through the cloud cover as you stand on a see-through floor!

It was time to make the final ascent on one last short cable journey to the summit of the Schilthorn (2,970m or 9,744ft high). Even at this altitude you won’t be stuck for things to do as there is a large shop, mainly James Bond themed, and a fully functioning revolving restaurant that featured in the film. It’s not cheap but then again it’s not every day you can eat a James Bond burger in a revolving restaurant at nearly 10,000 feet!

After a couple of hours we decided to head back down again but before reaching Mürren, we stumbled on a place called Allmendhubel, which is a large flower trail and play park for the kids. 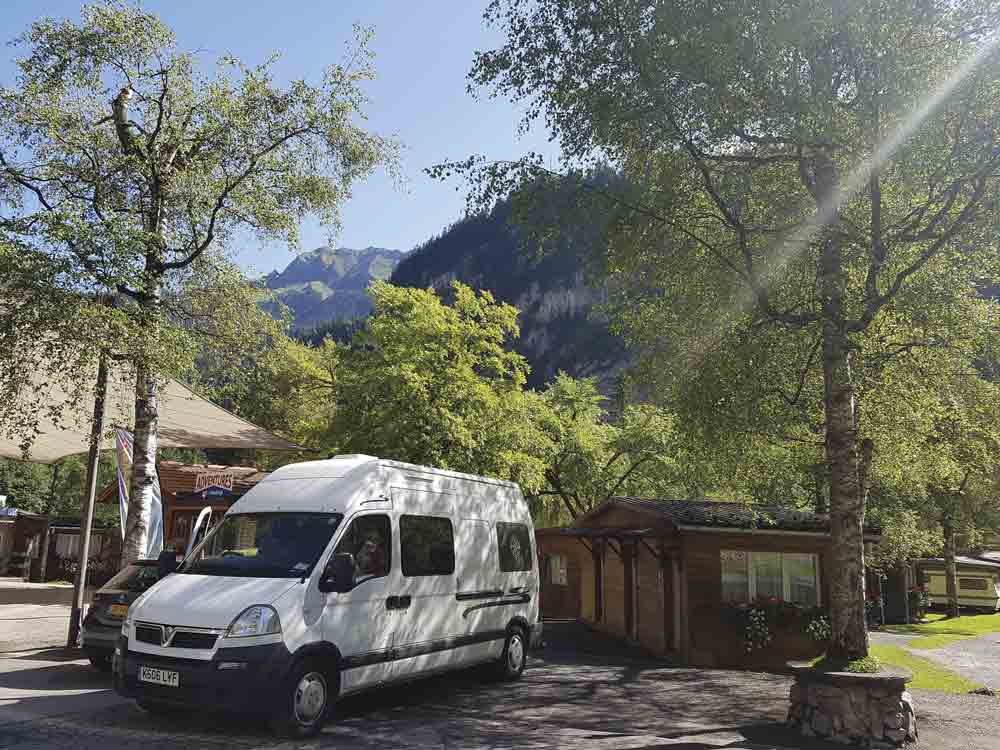 When we finally returned to Stechelberg it was gone dinner time and with three hungry kids a 30-minute walk back along the trail was not going to be easy. Luckily, Swiss public transport is extremely efficient and you can catch the bus from Stechelberg right to the door of Camping Jungfrau, so within 10 minutes we were back at the camper and frying up local sausage and rosti.

The next few days were spent exploring the local area. A must-see in the region is an attraction called Trümmelbach Falls, which consists of an impressive waterfall with 10 drops. The sheer force and sound of the water is incredible, although it was a little too loud for our youngest, who was only six at the time. It’s also worth bearing in mind if you have small children that it’s not accessible with a pushchair.

At the start of the second week we ventured out to Grindelwald to a place called Glacier Canyon. This is a natural formation made by the lower glacier cutting through the rock, which now hosts a variety of activities from rope swings, canyon nets and a canyon walk. In Switzerland it’s hard to decide where to go first, it’s also difficult to do everything as the rail cards and cable cars soon add up.

However, if you’re travelling with children, a regular visit for us was the schwimmbad at the top of Lauterbrunnen. This is a lovely family-run outdoor pool with a view of the Jungfraujoch in the distance and the owner, Mrs Baywatch, as she called herself, was brilliant!

After two weeks in Switzerland we would certainly recommend a visit. In fact, we enjoyed it so much that on the ferry home, we booked three weeks in the same region for next year! Talk about holiday blues!

This trip took place prior to the coronavirus pandemic. We are publishing it for your enjoyment and to help you plan your future trips. Read the latest camping travel advice here.