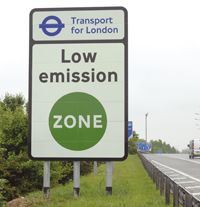 We follow Comfort Insurance MD, Peter Cue, as he converts his Hymer to conform with changes to the Low Emission Zone.

The Peter in this case is Peter Cue, managing director of Comfort Insurance. Peter has been a motorhome owner for many years, and his current vehicle is a 4.5-tonne Hymer A-Class. He also happens to live on the fringes of the Low Emission Zone.

Knowing that the deadline of January 2012 would creep up very quickly, in early 2011 Peter started to look around for someone to carry out the necessary conversion to his vehicle. At that time, a number of firms were beginning to express an interest in carrying out this sort of work, and were advertising the fact. In reality, a number of the firms that Peter tried to contact to discuss conversion failed to respond to him at all. The reason for this seems to be that, although they were advertising their services in motorhome magazines, in reality they were not yet ready or capable of carrying out the work.

When Peter’s van came due for its annual MOT, he discussed the problem with the proprietor of the firm concerned – East Coast Leisure, who told him that they could do the conversion work at the same time as carrying out the MOT.

This was arranged for July 2011, and happened to be the first conversion that the firm had undertaken. What quickly became clear is that the conversion work is not straight-forward, and in order to ensure that staff could become suitably skilled East Coast Leisure called in advice from specialists from Italy, Holland & the Czech Republic to oversee the operation.

Once the conversion had been completed, the dealer took on the task of getting it registered with Transport for London. Again, possibly because this was an early example, this process was not straight-forward and took quite a few weeks to complete.

Eventually an LEZ certificate was received from TfL. This is not however a one-off task, as the certificate has a two-year lifespan, after which there has to be a re-test to confirm that the Particle Trap is still working properly. This is of course at a cost, in addition to the original installation. Dependant on the system being fitted, the initial cost of conversion is between £2,500 & £3,500 so this is not exactly a minor job.

No doubt as time goes on the number firms capable of carrying out this conversion work will increase, and as the number of units being sold builds up it would be reasonable to expect that the unit cost will come down.

Motorhomes are of course only one of a number of vehicle types affected by the new rules, so overall the number of vehicles of all affected types needing conversion is quite large. Hopefully the sheer weight of numbers will drive down the unit cost.

In the meantime, Peter’s experience is well worth bearing in mind. If your vehicle is going to go into (or through) the London Low Emission Zone, there is a cost attached (and an even bigger cost if the original charge is not paid). The time and expense needed to get a vehicle converted is significant, so early planning is the key.