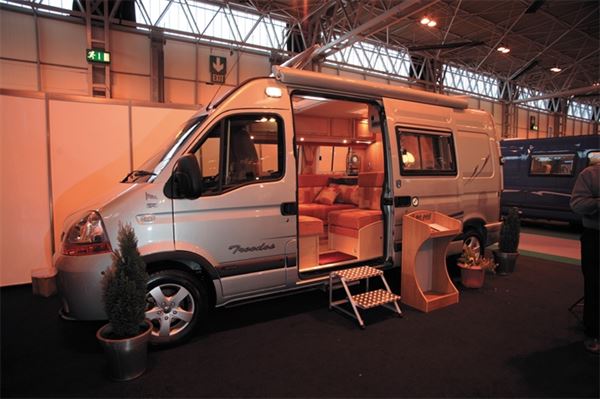 As big long-wheelbase van conversions have become more popular, so the choice of big lounges (front or rear), well-equipped kitchens and even bunk beds has added variety to the market. But if you want a really good washroom – complete with separate shower – you’ve had to look to a coachbuilt. Until now.

Of course, the long-wheelbase Renault Master is a favourite choice now for spacious van conversions and it has a lot going for it, not least the option of a Quickshift 6 automatic gearbox. But it is the comprehensive bathroom arrangements that make the Troodos stand out from its opposition. At the rear offside is the latest Thetford C200 benchtype cassette toilet (the one with wheels on the cassette unit), forward of which is a good-sized washbasin. Opposite is not only the (decent-sized) wardrobe, but a proper separate shower too. And there’s a door to shut off the whole rear of the ’van, creating a great changing room.

Up front, the Troodos has a large lounge with a 6ft settee on the offside and two individual seats facing each other across the doorway on the nearside. With swivels on both cab seats there’s no shortage of lounge space, but while the single forward-facing rear seat has a three-point belt, its lowish backrest and lack of a head restraint make it less than perfect for passenger carrying. The lounge converts into two single beds (the nearside one extending into the cab to achieve its full length) or a truly huge double bed. And below the seats there’s plenty of storage. There’s nothing but empty carrying space below the settee and drop-front doors make for easier access.

If the Troodos makes a compromise for its superb bathroom arrangements, it’s in the galley that you’ll find it. An 80-litre Waeco compressor-type fridge, a four-burner hob, a separate oven/grill and a stainless steel sink mean that you’re not short of equipment, though. A folding worktop alongside the sink makes up for any shortfall in that department and the lack of a draining board is compensated by plastic bowl fitted in the sink and a drainer for cutlery mounted on the sink’s glass splashback.

VERDICT
Stylish and with the best bathroom in its class, the Vanmaster Troodos is an interesting addition to the high-top camper market.


Back to "General" Category