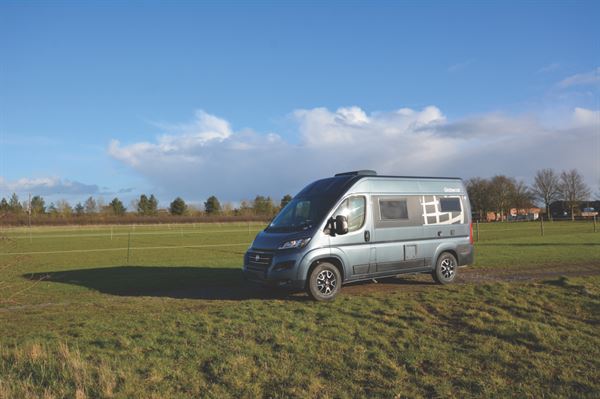 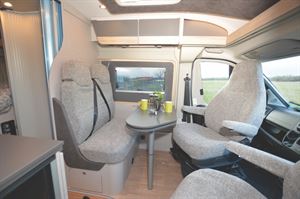 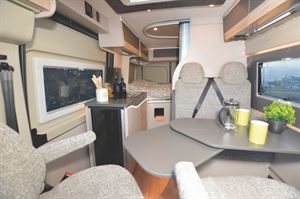 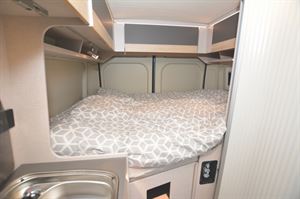 In the July 2021 issue of What Motorhome, the magazine featured its choice of the best new motorhomes and campervans for the 2021 season.

We’ve been impressed by Globecar’s van conversion range before but the mainstream D Line models were starting to look a little dated alongside the best of the rest, including Adria’s latest Twins and Pilote’s Premium range.

Now, however, the Roadscout (medium-wheelbase), Globescout (long-wheelbase) and Campscout (extra-long) enter 2021 in Elegance spec, which gives the brand a welcome lift in terms of modernity in their aesthetics, but still with that Teutonic durability that has become a feature of the marque.

Of the three revised models, all adopting proven floorplans, it’s the Roadscout that’s our choice for the Fixed Bed Van Conversion award. Partly that’s because, as a 5.4-metre model, it has far fewer competitors and partly because it’s much more challenging to make a fixed bed layout really work in such a small space.

Read our extensive range of motorhome and campervan reviews and road tests using our online content archive. Sign up, and you can search for models and manufacturers that have featured in What Motorhome magazine, simply by typing what you're looking for into the search bar below:

We like the fact that this campervan packs so much into a vehicle that’s still so manoeuvrable.

Like its bigger brothers, the new Roadscout gets new carbon-effect graphics on the outside and new furniture with duo-tone locker doors on the inside. There are flush-framed double-glazed windows, too, and a new Oxford upholstery.

LED lighting is a major feature of the new models, with overhead mood lighting, a backlit wall panel in the lounge and indirect illumination at floor and roof level.

Perhaps the biggest change, though, in common with some of its 2021-season rivals, is that the Fiat’s overcab shelf has gone, allowing a full-height walk-through into the cab. All this adds a modest £1,895 over the price of a standard D Line Roadscout.

The first thing you notice inside the Elegance version is the extra spaciousness afforded to the lounge area, where a soft-feel trim panel surrounds the large Heki rooflight and sweeps into the cab ceiling, while shelves above the cab doors merge into the handleless top cupboards over the lounge.

The glossy window surround is another stylish feature, while the tweed-style fabric looks – and feels – classy.

The half-dinette arrangement here might look like any other, but the rear travel seat has an improved backrest shape and the table has a swivelling extension leaf, so that four can dine.

There’s a rotating LED strip light over the table, as well as a 12V socket and USBs, while the open doorway adjacent can be covered by a flyscreen and coat hooks are fitted in the entrance.

You’ll spot a couple of storage compartments in the raised dinette floor, too, while a hatch in the side of the half-dinette base gives access to a usefully large locker without removing the seat cushions.

The kitchen has its 98-litre compressor fridge in the best position – at the end, facing forwards where it can be reached from outside as well as in, and, being the new Dometic 10-Series, it has a door that opens either way.

It’s actually a bigger fridge than you get in the larger Elegance models and more conveniently positioned, too.

Above the fridge there’s a surprising amount of kitchen worktop, doubly so as this is just a medium-wheelbase campervan. That’s been achieved by using a combined hob and sink unit rather than bulkier separate appliances.

Below are three large drawers for good, practical storage. These things really matter when space is at a premium.

Opposite the galley, the washroom offers a generous amount of room to use the shower and toilet.

It’s spacious by any van conversion standards but especially so for a medium-wheelbase model. Such roominess is achieved via a pair of tambour doors that pull out and clip together magnetically, extending the bathroom into the aisle, where a wooden cover hides a shower tray boasting twin drain outlets.

By extending the washroom like this, Globecar has achieved a shower cubicle that’s a practical size and one in which you don’t need a clingy curtain around you. A concertina screen protects the toilet and basin from getting drenched but doesn’t interfere with your space to shower.

In a 5.41m panel van, of course, the only possible fixed sleeping arrangement is a transverse double bed and, here, Globecar makes the most of the Ducato’s internal width. Bed length is 1.95m while mattress width varies from 1.32m on the offside down to 1.15m on the nearside.

A small recess in the panel under the front of the bed provides a step to aid access.

Sensibly, glazing is omitted at the sides of the bedroom (blinds would be likely to get damaged by pillows and flailing arms/feet at night), but the UK spec will usually include opening windows in both rear doors.

The bedroom lighting includes reading lamps on rails, so they can be positioned at will, but overhead cupboards preclude sitting up in bed – we’d question that in a larger campervan but here it’s important to have the stowage space for clothes.

Underneath the bed, in the boot area, you’ll find the easily accessible gas locker on the nearside and, forward of that, the Combi boiler.

The 100-litre fresh water tank is built into the slim locker on the offside and, between the two sides, there’s a capacious load area measuring 730mm high and fitted with tie-downs. To allow taller/larger items on board, the bed can be split into three sections and stacked to one side.

Like all Globecars, the new Elegance models feature an enhanced UK standard spec, including cab air-conditioning, a passenger airbag, ESP, height-adjustable passenger seat, spare wheel and a soft-closing sliding door. The 140bhp engine is included in the base spec, too.

You can give your Roadscout extra sleeping capacity with a third berth in the dinette (£360). An insulated waste water tank (£225) might be worth considering for winter camping and carpets add a touch of homeliness for another £225.

Here, then, is another high-quality Globecar campervan with a predictably Euro-style interior. Its décor is more contemporary than Roadscouts of yore but it doesn’t reinvent the wheel.

What it does do is incorporate a better kitchen and washroom than many of its ilk into a camper that’s a great size for adventuring off the beaten track, as well as into towns and cities.

Buy the July 2021 issue of What Motorhome magazine here