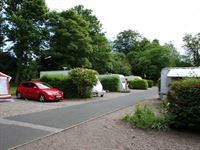 You’ll see why the Scots and English constantly fought over this border country when you visit... This 5-star park is perched on a commanding clifftop at the edge of Berwick, next to the ancient ramparts with unbroken views of craggy coastline. ...

This is the Caravan Club’s northernmost English campsite. Its actual location might raise an eyebrow at first sight, as it appears to be slap bang in the middle of a residential area, but its high elevation compared to the surrounding area affords ...

Just 50 yards from the banks of the River Tweed, 4 miles from the historic seaport of Berwick-upon-Tweed, this is a peaceful adults only country park. Pitches are large hardstandings and a new, 4-star amenities building will impress. Birds and ...

This 5-star park was once part of a country estate! This regal wooded landscape is elegantly set around seven lakes and even the original tower. And, of course, the untamed beaches here are one of the UK’s best-kept secrets.

Pot a Doodle Do WigWam Village

Said to be the North East's only dedicated wigwam village, home to 20 wooden wigwams and three canvas yurts. The wigwams are insulated wooden structures fitted with beds and mattresses and sleeping up to five people. Dogs are allowed in some. Each ...