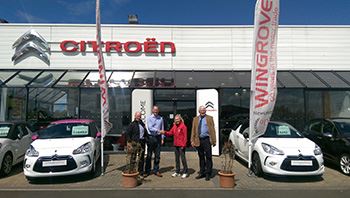 WildAx Motorhomes has announced that Wingrove Motor Company of Newcastle will be representing WildAx in the north east.

Wingrove is a Citroen main dealer with two successful multi-franchise sites in Newcastle and a large body shop repair centre. Wingrove Motor Company which is celebrating 90 years in the motor trade this year will be receiving a range of WildAx demonstrators in the new year will also attend a number of trade shows this year to promote the new relationship with WildAx throughout 2015. Peter and Jose Dalkin and Louise Parker of Wingrove can be seen pictured with Duncan Wildman of WildAx and John Brett, Wingrove’s General Manager, at their Newcastle East site on Silverlink Park.

Duncan Wildman said, “We are very happy to have been approached by Peter and Jose. The WildAx brand has grown a lot in the last few years into one known for high build-quality and a good mixture of layouts. The combination of quality and the ability to make the motorhomes individual to the customer’s needs has made the brand popular in the UK. We are excited at the opportunity to work with the team at Wingrove and see the north east as a growth area for WildAx in the next few years. Wingrove Motor Company is a family run company with a long history of great customer service with a dedicated staff team.”

WildAx Motorhomes has doubled production capacity during the last two years and is currently in the final stages of building a second site adjacent to its current facility to cope with the increased demand. The company now has dealers covering Scotland, Wiltshire, Cumbria, Merseyside and the north east with coverage for the rest of the country from its head office. Duncan added, “Orders from dealers for the 2016 season are 50% up on 2015 season with orders from direct customers in line with this increase.”