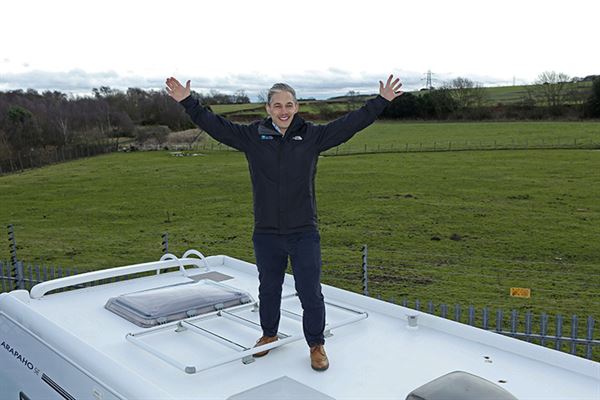 Tyne Valley Motorhomes, based at Byermoor near Burnopfield, has bought two acres of agricultural land behind its existing site, which will enable the company to roll out business development plans.

Jonathan Bell, who took over the day-to-day running of the business from his parents Derek and Elaine seven years ago, says the company had already outgrown the site long before he took charge and this development will allow it to spread its wings.

Jonathan made an application for change of use for the land, which will allow Tyne Valley Motorhomes to expand, provide new facilities and enhance customer experience at the site.  He commented, “We have seen a fantastic upturn in sales this year and are ahead of target; the mood in the marketplace is much more relaxed than the last few years and we believe the time is right to invest in the business and its customers.

“We are always looking for ways to improve the business and to give customers the best service and experience.  A new workshop, a café and a kid’s play area will feature among other things.”

Tyne Valley is one of the UK’s most significant dealers, with 2pc national market share it attracts custom both home and abroad, with regular customers from countries such as New Zealand, Ireland and the Channel Islands.

The business - which sells new and used stock as well as providing hire - was started in 1986 by Jonathan’s father, Derek, who began converting motorhomes and selling them from his driveway at home in Burnopfield.

As the business progressed, Derek and his wife Elaine outgrew their first premises, which had enough space to show 20 motorhomes.  The existing site now holds up to 100 motorhomes – Jonathan is aiming to expand that as part of wider plans to grow the £11m turnover firm by 20% in the next three years.

The firm’s decision to set up a network of warranty approved repairers across the country and Scotland significantly opened up the UK market. Now, the many customers who decide to travel for a competitive deal from Tyne Valley Motorhomes, or who buy at an exhibition, can have their vehicle serviced in their own region, regardless.