Ready for some retro entertainment in your motorhome? 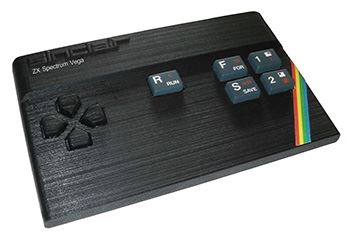 Were you one of those eager adopters of early 80s gaming technology, otherwise know as the Sinclair ZX Spectrum? Some 33 years on, Sir Clive is back at the pit face of computer gaming to hew out his latest creation, a small computer with 1,000 Spectrum games built in. At much the same size as the original Spectrum, it’s a perfect accessory for providing entertainment in your motorhome as it simply plugs directly into a TV.

Now, Retro-Computers Ltd, the company launched last December by Sir Clive Sinclair and colleagues, has started taking orders for the company’s first product - the Sinclair ZX Spectrum Vega games console. Priced at £100 (plus P&P), and coming already loaded with 1,000 Spectrum games, the Vega was announced only last December when Retro Computers Ltd raised £154,000 in a crowdfunding campaign on Indiegogo.

The venture has already benefitted from suggestions made by some fans nostalgic for the days of the original ZX Spectrum computer, which sold more than 5 million units in the 1980s. Chris Smith, Retro Computers’ Technical Director, who designed the Vega, said:

“We are especially grateful to those Spectrum fans who have made suggestions as to additional features they would like to see in the Vega, and we have taken all those suggestions seriously, we have discussed them, and we have decided to implement two of them in the first release of the Vega.”

To mark the occasion the company has also introduced its mascot, a British Blue cat called Clive who appears to know how to code in the computer programming language BASIC. Clive’s can be seen in a video on www.zxvega.co.uk.

The company expects to deliver the first 1,000 Vegas at the end of May, and the next 3,000 units the following month. The Vega, which is being manufactured by SMS Electronics Ltd in Beeston, Nottinghamshire, is then expected to continue with a 10,000 unit production run in August or September.