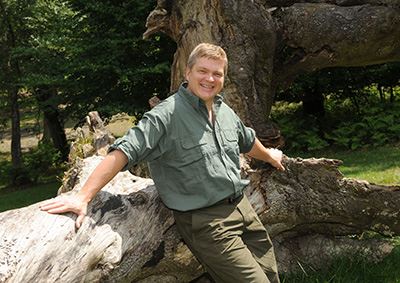 Bush speaker down as NCC reacts to Ray Mears' comments

Survival and outdoor foraging expert Ray Mears has been unceremoniously dumped from working as a celebrity guest speaker at the Caravan, Camping & Motorhome Show after making derogatory comments about caravans on the BBC1 Room 101 show. The show, televised on 17 September, features celebrities detailing their pet hates and in this case, Ray called caravans “hideous”, complaining that, “You go down to Devon and all you can see are cities of these displaced urban people in their ghastly white caravans."

The NCC, the UK trade body for the touring, motorhome and caravan industries, which hosts the Show at the NEC, Birmingham, made the following official statement:

“Following his recent appearance on BBC’s Room 101 and after careful consideration, we have decided not to work with Ray Mears at the Caravan, Camping & Motorhome Show 2015 so he will no longer be appearing as a speaker at the event in February.

We enlisted him as a credible ambassador because of his love of the great outdoors, something which our industry and community share. Therefore we were disappointed to hear his comments on TV, which were made and pre-recorded before we entered into discussion with Ray’s agent. We feel his agent should have made us aware of this pre-recording the moment we began communicating.

Knowing that these comments would come to light and then agreeing to work with one of Europe’s largest shows of its kind, with tens of thousands attending, we feel he has acted in a less than professional manner.

We’re sure that if Ray spent a weekend away in a caravan or motorhome he would very much enjoy himself and realise what a fantastic enabler it is to getting outside.

We have extended an invitation to him to attend the show in a personal capacity to meet, and speak to, visitors about the benefits of this timeless and much loved leisure option, enjoyed by millions of people every year across the nation.

As the ultimate lover of the great outdoors, we do hope that Ray will accept our invitation, as well as the offer of a weekend away in a caravan to experience the freedom, quality of life and fun that caravanning provides.

The show will go on and we are looking forward to welcoming our other celebrities Matt Baker, Sally Gunnell and Melodie King to the NEC in February.”

For more information and to book tickets, go to the Caravan, Camping & Motorhome Show. Check out these Warners shows for the 2015 motorhoming season.