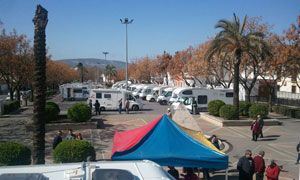 If you’re planning on taking your motorhome to Spain this September, you could do your bit to raise the profile of motorhoming in the country and be a Guinness world record breaker to boot!

The unlikely named, “Turtles 2012”, is an ambitious project that aims to raise public awareness of the benefit of motorhomes visiting Spanish cities and of its status in general.

At present motorhomers are not always held in the highest regard by officials in much of Spain, and Turtles 2012 aims to improve this situation.

The event, which takes place from 12 to 16 September, will be held in Cabra (Córdoba), in the Andalusia region of Spain. The choice of venue part informed by location and climate, but largely due to the town’s rare ‘motorhome-friendly’ status.