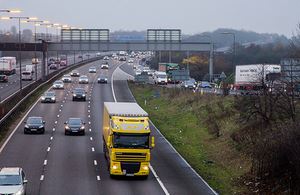 The government announced today that it will press ahead with plans to introduce signs on motorways that display the price of fuel at service stations, to help promote competition and lower fuel prices. The announcement was made as part of the Chancellor’s Autumn Statement. The Department for Transport will begin work early next year on trialling a new fuel comparison sign at 5 service stations on the M5 between Bristol and Exeter, with a view to introducing the signs by the end of 2015.

Transport Minister Robert Goodwill said: “For too long drivers have been ripped off by petrol prices on motorways. Today’s announcement will ensure people can see the cheapest places to fill up, encouraging greater competition between service stations.”

The trial follows a report by the Office of Fair Trading (OFT) in January 2013 which called for more public information on UK petrol and diesel prices. The OFT found fuel sold at motorway stations was on average 7.5 pence per litre more expensive for petrol, and 8.3 pence per litre for diesel, than across the rest of the country. Five service stations on the Bristol to Exeter stretch of the M5 have agreed in principle to be involved in the trial.

Neil Greig, Instituted of Advanced Motorists (IAM), Director of Policy and Research, said: “We at the IAM greatly welcome this move, at last it will give motorway users the chance to compare prices and not feel held to ransom at hefty premium prices charged on these routes. Using a motorway should not be seen as a penalty, and service station operators need to think long and hard about the charges they make. They should not see motorway users as a ‘cash cow.’

“We also see fairer prices on motorway fuel as just the start – there is no justification for such eye-watering prices for food, refreshments or other such essentials.”

In a related measure, Fuel Duty remained frozen in the Autumn Statement but this drew criticism from Quentin Wilson of the FairFuleUK Campaign. Quentin commented, “The FairFuelUK Campaign welcomes the continual freeze in Fuel Duty by the Chancellor in today's Autumn Statement but his tax take is now approaching 70%. He could have done more. He knows, along with the IMF, that cutting fuel prices is good for GDP, new jobs and inflation. He also did not call for an Oil Price Enquiry to investigate why the recent massive fall in oil prices have not been reflected similarly at the pumps in terms of the right amount and timing. Marks out of 10 is six. Could do better.”

Read about the latest places to stay with your motorhome in MMM magazine.