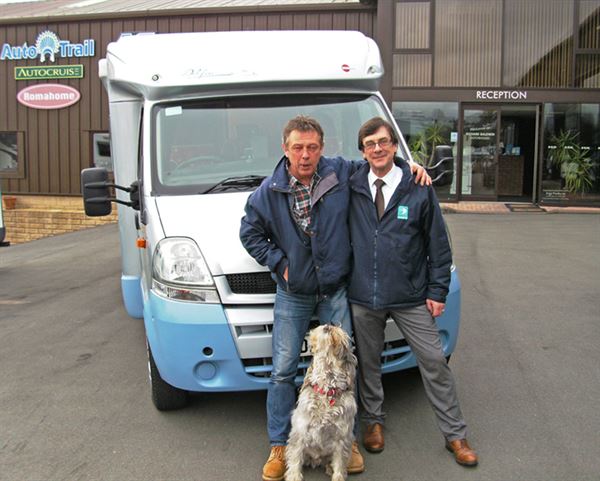 Andy Kershaw collected his new motorhome from Halifax-based dealer Richard Baldwin Motorhomes recently and claimed to be almost as excited as he was when he co-hosted the marathon worldwide Live Aid Event from Wembley in 1985, that was watched by an estimated 1.9 billion people across 150 countries.

Andy purchased his new Bürstner Delphin 821 motorhome from Sales Manager Paul Heeley after they first shared a common bond in their fondness of motor and TT racing.

Andy’s work which includes reporting on BBC 1’s The One Show, performing his own one man show The Adventures of Andy Kershaw and of course his mobile DJ shows, takes him all over the UK and beyond, as such a motorhome seemed to be the perfect choice for him.

Andy explained that because of the nature of his work, he couldn’t always guarantee where he would be or at what time and so having a motorhome to guarantee a well-appointed and comfortable night’s stay at the end of his shift made perfect sense. More importantly though, it meant that he could also take with him Buster, his much loved Schnauzer.

Paul commented that he was going to mention the many awards that RBM had won as part of his sales patter, but when he noted how many Andy had won for his broadcasting, just a record breaking nine Gold Sony awards, he thought better of it.