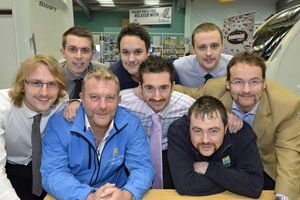 “We think it’s a great charity and growing a moustache is an effective way of raising awareness about prostate and testicular cancer whilst also raising much needed money,” says Scott Higgins, Salop Leisure’s marketing manager.

“A couple of the men have already grown a handlebar moustache, while I’ll be pleased to grow any type of moustache. It’s a fun way of spreading important health messages to all staff.”

Female staff are also being urged to get involved by encouraging their men to grow moustaches for the charity during the month. Anyone wishing to sponsor the ‘Mo Bros’ can do so online at mobro.co/salopleisure

In 2011, more than 854,000 supporters around the world raised £79.3 million during Movember and the organisers are hoping to top that figure this year.