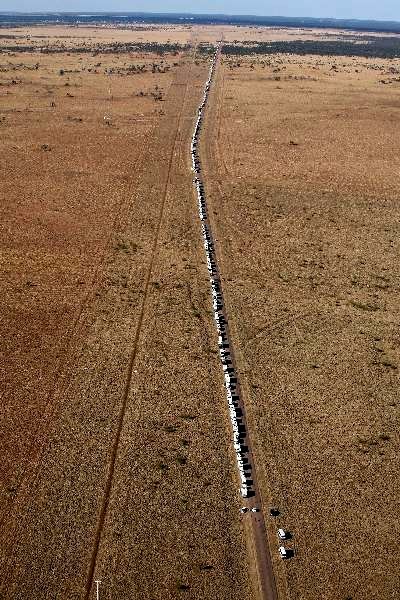 Not content with being world beaters at cricket, Australia now seem hell bent on dominating the world of motorhomes with a crack at a Guinness Book of Records attempt at the Longest Line of RVs.

Recently the Campervan and Motorhome Club of Australia (CMCA) decided to see if they could beat the current record of 671 vehicles – set by the Italians – at their anniversary rally at Barcaldine in Queensland, however fell short by just 44.

To meet the Guinness Book of Records conditions, the RV line actually has to be rolling. Just prior to the start, the parked line of motorhomes was about 11km long, an impressive sight indeed and it did take quite a time for everybody to get moving.

Sadly at 629 vehicles, the CMCA was just 44 short of breaking the record, but good fun was had by all and the Angel Flight charity (that co-ordinates non emergency flights for financially and medically needy people) received a considerable donation from all participants.

So if any of you record breakers out there fancy getting one over on the Aussies – and to be fair who wouldn't! – then why not get in touch with us...