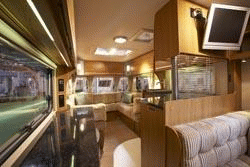 THE Bailey Brambler caravan – designed by Iain and Julia Bramble – has won the My Bailey Van Caravan Design Competition.

Its layout features two dedicated living and sleeping areas, an L-shaped kitchen and spacious end washroom. The judges were impressed both with overall concept as well as the attention to detail of what was a very well thought-out design.

The Brambles designed a caravan they can enjoy with their daughter Ellie and son Alex.

TV presenter Rowland Rivron was on hand at the October NEC show to present the keys to a prototype of the Brambler. It was he and his family which launched the competition at the NEC in February when they took the wraps off their Bailey van - the Ranger Rivron.

Bailey will now produce a second version of the Bailey Brambler, based on the first prototype, which will constitute the competition prize.

The Brambles will then collect their caravan from their local retailer, Ropers Leisure of Catterick Bridge in North Yorkshire, later this year.