Coming soon to a site near you: High-speed internet direct to your van 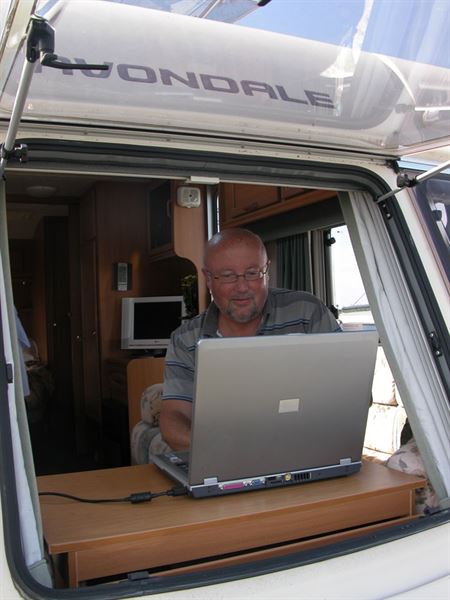 IT was only a matter of time before it happened. As the information superhighway continues to bulldoze its way into every aspect of our lives, high speed internet access will soon be available in the comfort of your caravan or motorhome.

One of the pilot sites is the Camping & Caravan Club affiliated site at Greetham in Rutland. Warden Roy Molson asked regular visitors Terry Eato and Dennis German to install the new system after they complained about the lack of high-speed internet access at the vast majority of sites they visited.

“We researched the number of sites offering any sort of internet access and could only find two or three in the country with broadband,” said Terry, from Wigston, Leicestershire.

The systems work rather like a super-charged internet hotspot that you might find in a hotel lobby or at an airport – but they cover a much wider area – up to 150 metres. So instead of buying a cup of coffee and sitting down to surf in a smallish wi-fi hotspot – you can browse the web from the privacy of your personal space.

The site’s 8-megabyte broadband connection is linked to an aerial which transmits the signal over a 150-metre range – meaning most pitches on the site can pick up a clear signal. “Caravans now incorporate most of the home comforts we’ve come to depend on such as satellite TV and mobile phones, but until now, broadband internet access has been either very expensive or non-existent.

“Now you can check your email, download some music or surf the internet in comfort and privacy,” said Terry. “It might not be everyone’s priority, but this sort of technology even means you could work from your caravan instead of going into the office.”

Once on site, it’s simply a case of switching on your wireless-equipped laptop PC, which should automatically pick up the signal and ask you if you want to use it to connect to the internet. Key in the security password and within seconds you’re online. No wires, no phones, no restrictions.

Caravanners who want access to the service simply pay by the day, week or weekend – with rates of £2, £3 and £5 respectively looking extremely good value compared with the rates for a similar service in a posh hotel.

“It’s only been up and running for three weeks and we’ve not really promoted it but, we’ve already had a lot of interest from caravanners,” said warden Roy. “Even some of the campers who have lap-tops in their cars have signed up!”

Now the word is out there, Terry and Dennis have received a great deal of interest from sites throughout the UK and are expecting to roll their system out to a number of additional sites in the coming months.

Meanwhile, in deepest Essex, the popular Waldegraves Holiday Park has a slicker version of the service – a KeZone Wi-Fi hotspot extending across the entire park and beyond.It allows holiday-makers to purchase 1-hour, 4-hour and 7-day cards, witth the option for regular holiday-goers to buy a 30-day card or a subscription.

Brett Lord, Manager of Waldegraves said: “KeZone is perfect for those wishing to check their emails whilst away from the office and for families searching for local amenities and activities. It even provides an additional form of entertainment, since children can even use their Wi-Fi enabled games consoles to play against friends whilst on holiday.”