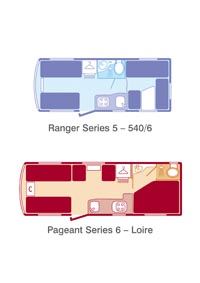 BAILEY is strengthening its caravan product range with the introduction of two new family friendly layouts.

Due for launch next year, they are a new Ranger Series 5 variant – the 540/6 – and the Pageant Series 6 Loire.

The 540/6 is described by the company as a unique single axle double dinette layout.

It is based on the recently launched Senator Series 6 Carolina and features a new end bedroom configuration that includes a flexible triple bunk arrangement and a larger L-shaped rear saloon.

It also gets a central washroom, a kitchen and full length parallel front beds.

The Ranger 620/6 is the best selling model in the range  and was recently named as Best Family Caravan in the Which Caravan Awards.

A Bailey spokesman said: “This innovative new layout provides accommodation for up to six people, including a rear fixed double bed with an en suite corner bathroom.

“Full length parallel front beds and a single side dinette, with Pullman overhead bunk, completes a flexible living arrangement that will suit families and couples alike.”

The new models will go on show at the National Boat Caravan & Outdoor Show, held at the NEC Birmingham between 19 and 24 February next year. 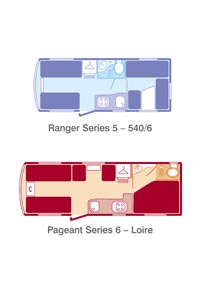