Why you should take a caravan to the festival 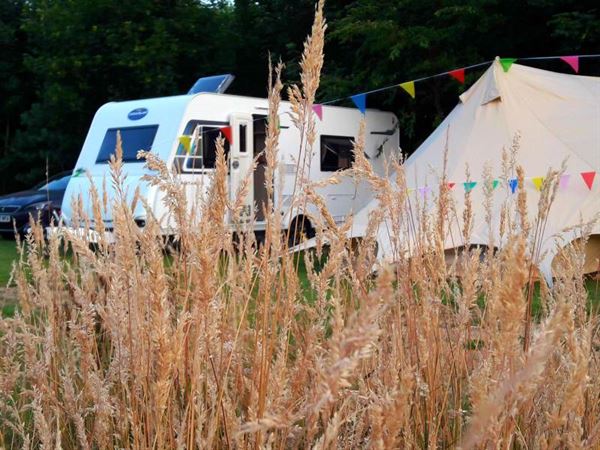 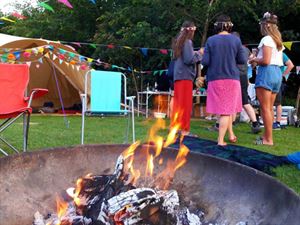 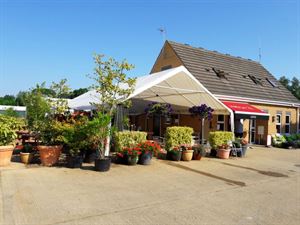 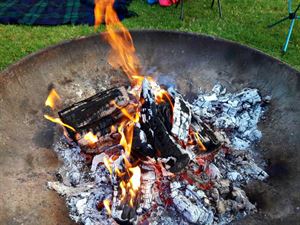 It's mid-summer, and the sun is blazing by 7 am at the festival. By 8 am, the heat is rising, and your tent is like a furnace. By 9 am, you're desperately seeking any shade, so you don't suffer from heat stroke by 10 am. The question going through your mind is 'How am I going to get through the day when there is no swimming pool?'.

This is how we would have felt when my wife and I organised a mini-festival for my daughter's 21st birthday this summer. We'd have felt like this if we'd been camping, that is.

Our family and friends converged on The Secret Garden Touring Park near Wisbech in Cambridgeshire. It's a great site. 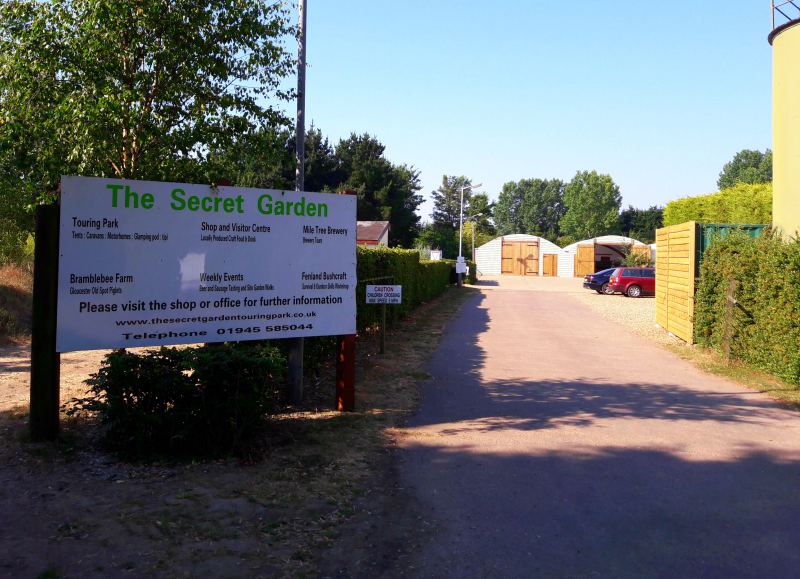 We had booked five pitches for the group in their 'Meadow' area. The owners don't mow the middle of the meadow. It has wildflowers growing there, and the campsite feels as though you are wild camping. Visitors camp around the edge of the field. It's relaxed and secluded. 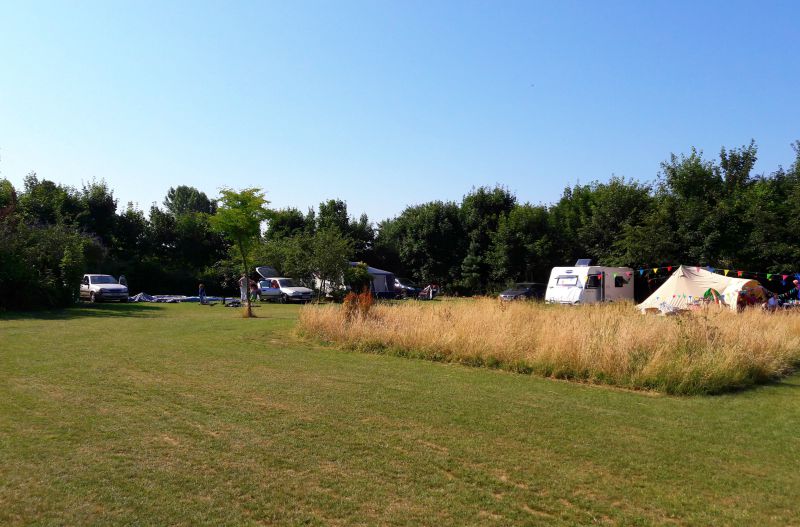 Everyone arrived with family tents, and we had borrowed a big bell tent for the 'young 'uns' to use. But, Penny, my wife, and I had something much better than a tent for the weekend.

We had borrowed a Caravelair Antarès 485 caravan for the weekend.

And, were we glad of it? You bet. It was a brilliant respite from the heat on our mini-festival weekend.

Protection from the sun in a caravan

Firstly, the most fundamental benefit of using the Caravelair Antarès 485 for our festival was protection from the sun. When the sun came up early each morning, we didn't notice it. We had the blinds down, and we felt no effect from the sun. 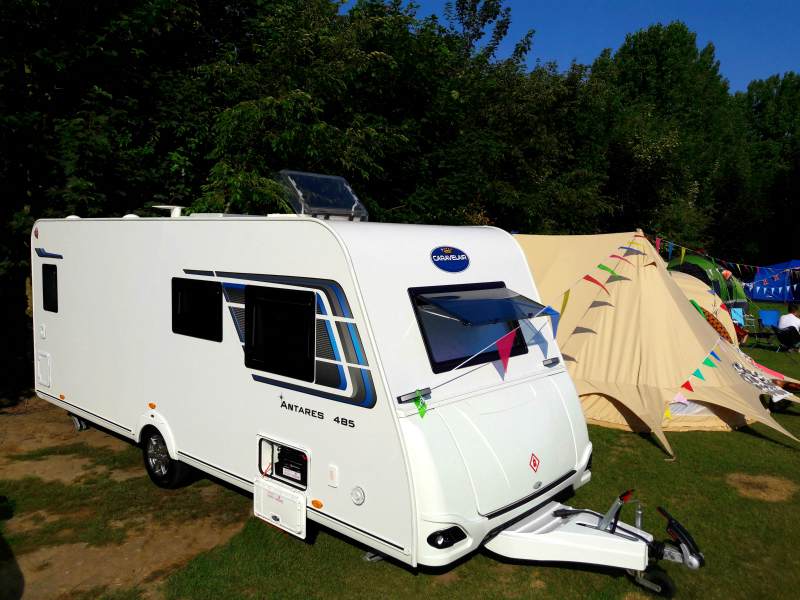 Compare that to being in a tent at a summer festival when, by 7 am, you can feel the sun's radiation beating down on you in your sleeping bag. In a tent, it can be stiflingly hot early in the morning. It's hardly a relaxing start to the day.

In the Caravelair Antarès 485, Penny and I were cool and comfortable on the double bed. We slept well in the 485. It was luxurious compared to nights on a blow-up mattress in a tent. And, my back didn't ache the next morning, which never happens when I sleep in a tent these days.

Later in the morning, the 485 still provided a comfortable, shady place to sit out of the sun. With the windows open at the side and on the roof, there was a good draft, so it was fresh inside too. 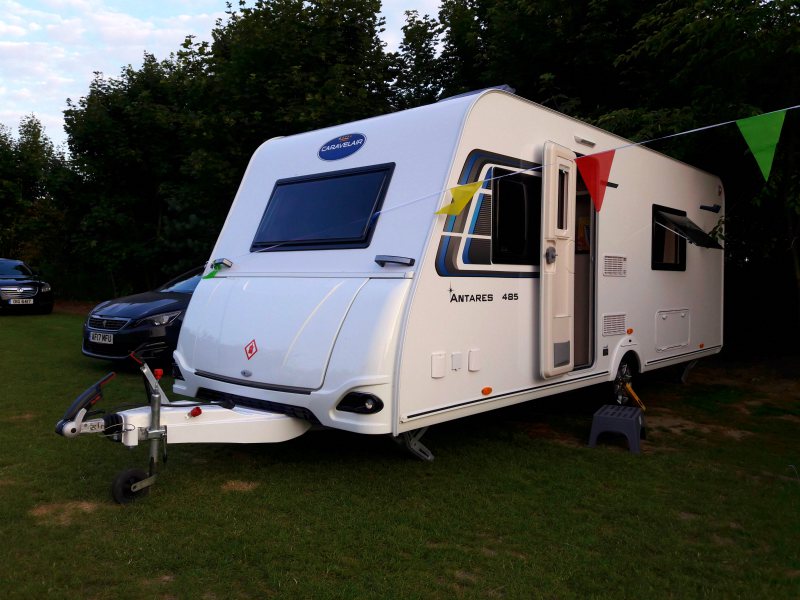 For much of our festival weekend, we cooked outside on barbecues near to a fire pit we'd placed as our focal point.

But, having the Caravelair Antarès 485 there with its oven was perfect. It ensured we could cope with the number of mouths to feed, and we had somewhere to keep food warm while we incinerated the meat on the grill!

The surface space in the 485's kitchen is good too. Cutting up vegetables for salads is so much easier on a flat surface. We usually balance it on our knees when camping.

When we weren't boiling water in the kettle on the hob, we pulled down the glass hob cover and flipped out the surface extension on the left-hand side of the kitchen. This gave a considerable area for preparing food.

With the scorching weather, keeping food and drinks cool was important. We had our cool boxes, yes, which we had packed with ice cubes. But, the ice melted quickly and couldn't cope with the heat.

Once again, the Caravelair Antarès 485 came to the rescue with its fridge (85 litres). We kept our milk, butter, fruit and vegetables fresh and edible.

I've only been to one festival, WOMAD and it was great fun. Fortunately, it was dry, so there was no wading through mud to see a band or pick up a mung bean burger from a trendy stall.

But, there's no doubt about the relaxed atmosphere of that festival, and others I've heard about and watched on TV. We wanted to recreate the feeling of a festival, without the dirt and discomfort, of course (I'm moved on from all that!).

My daughter, son, their cousins and friends decorated our bit of the campsite with plenty of bunting and fairy lights (fairy lights are not just for Christmas). It looked great. When the sun finally dipped in the evening, it was time to turn on the lights.

And where better to plug in the lights? The Caravelair Antarès 485, of course. 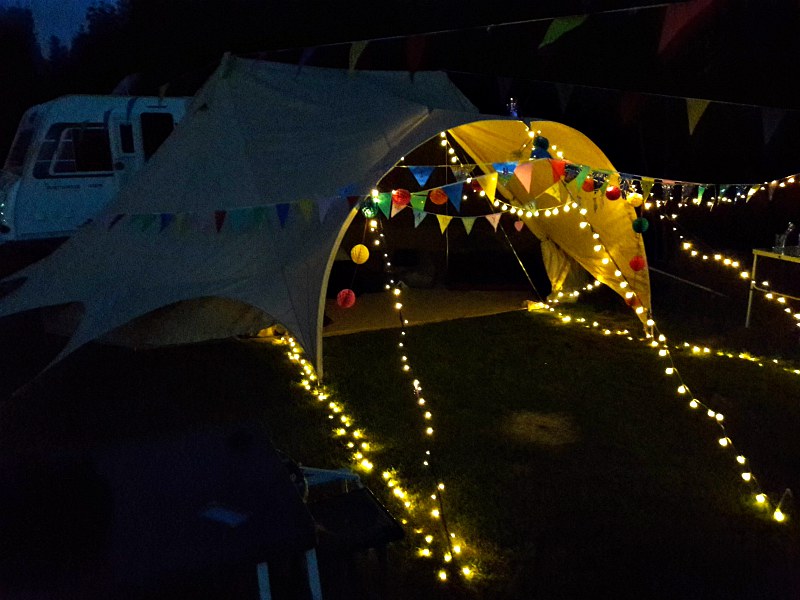 Another simple benefit of taking a caravan to a festival is lighting. To get off to sleep, I like to read for half an hour or more at night. It helps me relax.

When you sleep in a tent, one of the trickiest aspects of reading at night is getting light onto your book or Kindle. I usually balance a torch or lamp on my pillow. One small movement from me, however, and the light slips off. It then takes me a minute to retrieve the torch and reset it in the same place.

I could hang the lamp from a string on the tent. But, that would mean the light is in my face and not on my book.

There's none of this fussing about in a caravan. The Caravelair Antarès 485 has reading lamps on the wall behind its double bed. The LED lights are on adjustable storks so you can direct them to exactly where you need them to point.

Another big difference between going to a festival with a tent compared with taking a caravan is keeping your 'stuff' organised. In a tent, you usually live out of a bag or a rucksack.

Unless you are as disciplined as a soldier on operations with packing your stuff away, you'll soon have your clothing, wash kit, shoes, sunblock and gadgets strewn all over the place.

With a caravan, you can keep organised. There's storage space everywhere, especially in the Caravelair Antarès 485. It has lockers everywhere. Above the bed, above the lounge seats, under the seats, next to the fridge, next to the bed. If you can't keep your stuff tidy and organised in a 485, then you must like living like 'Stig of the Dump'!

Keeping clean in a caravan at a festival 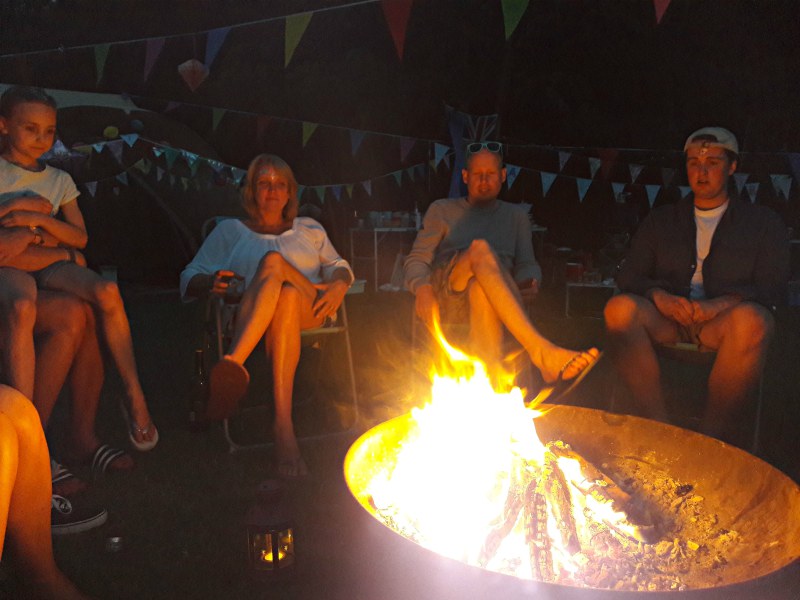 Even at my daughter's mini-festival, with the fire pit in the evenings, the heat and the dust, it was a challenge to keep clean and smell fresh. The campsite has good showers, however. But, at a festival, when you are sharing the loos and showers with hundreds of other people, you are bound to feel grubby.

You have none of that with a caravan. The 485 has a big end washroom. The large shower is on the near side with a good-sized sink next to it. On the offside is the loo. What more could you want for keeping fresh and clean at a festival than your private washroom?

No sharing with dirty campers. You don't have to worry if you are going to catch a verruca in the shared showers. It's all your own in a caravan.

The 485 has a great washroom. You'll appreciate it at a hot, busy festival.

Towing the Caravelair Antarès 485 across the bumpy back roads of Lincolnshire and Cambridgeshire was a breeze. It weighs 1317 kg, and I pulled it with ease using my Peugeot 305 SW.

Manoeuvring it on site into our pitch was easy too. Being a single axle caravan means it is a cinch to reverse into place also. It was light enough for me to adjust its position by hand once I'd unhitched from the car.

For this mini-festival, the ground was baked hard, so no need to ask the local farmer for a tow out of the swamp.

An excellent caravan for a festival 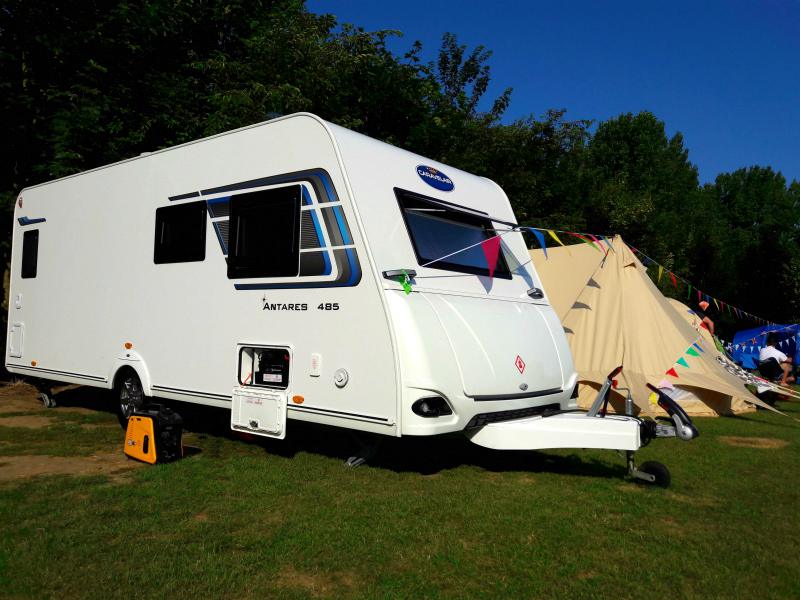 The Caravelair Antarès 485 is a super caravan to consider if you want to go to a festival with family or friends. It's a place where you can escape the heat and hubbub of a festival, sleep well and be fresh for another day of fun.

You'll like the ability to lock it up when you're out enjoying the festival to keep valuables secure. Plus, you can live well in the caravan after you've gone wild at the festival. The Caravelair Antarès 485 is a bit of luxury for those who want to enjoy a festival without feeling like it's a health and hygiene battle.

Read our full, online review of the Caravelair Antarès 480 (which has a transverse bed layout) here!