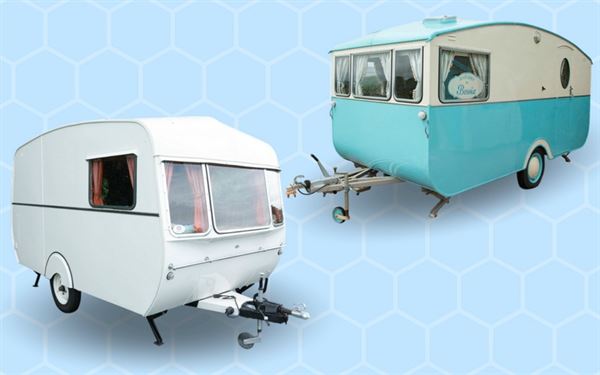 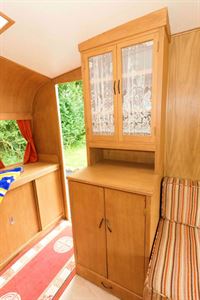 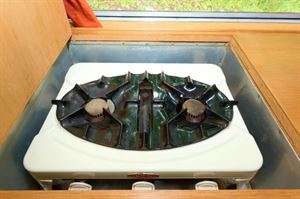 Two caravan parks celebrate their heritage by having historic caravans restored. One is an Eccles and the other a Holgate; both were pioneer names in caravan manufacture

In the embryonic days of touring, long before the invention of the showers and efficient heating systems that we all now take for granted, caravanning manufacture pioneers were beavering away setting the foundations of the vibrant touring industry we have today. And caravan parks were also beginning to evolve, from single water tap affairs to full-facility holiday centres.

We’ve discovered two caravans on two parks, 340 miles apart, both with an evolution story to tell and both having commissioned historic caravan restorations to celebrate milestones.

Caravans were basic affairs. Hand or foot-operated water pumps for the kitchen sink were pretty much the only mechanisation. Little attention was paid to weights and payloads and noseweight. Yet these early tourers got themselves a loyal following as holiday freedom was beginning to take off.

The first touring caravans emerged in the 1920s but it was in the 1950s and 1960s that the energy ramped up. It’s a fascinating era, from which we have discovered two survivors; classic caravans, both meticulously restored, on campsites as far apart as Cornwall and Cumbria.

One is a name we all know. It’s an Eccles, the oldest surviving name in caravans and the company which pioneered touring caravanning as we know it today. (It’s now a brand component of the giant Swift Group, of course.) The other is a name once associated with caravan manufacture but now familiar as a flagship name in caravan holidays: Holgate.

Long before the Holgate family set up the first Holgates Caravan Park, on the southern edge of Cumbria, the family was making touring caravans. 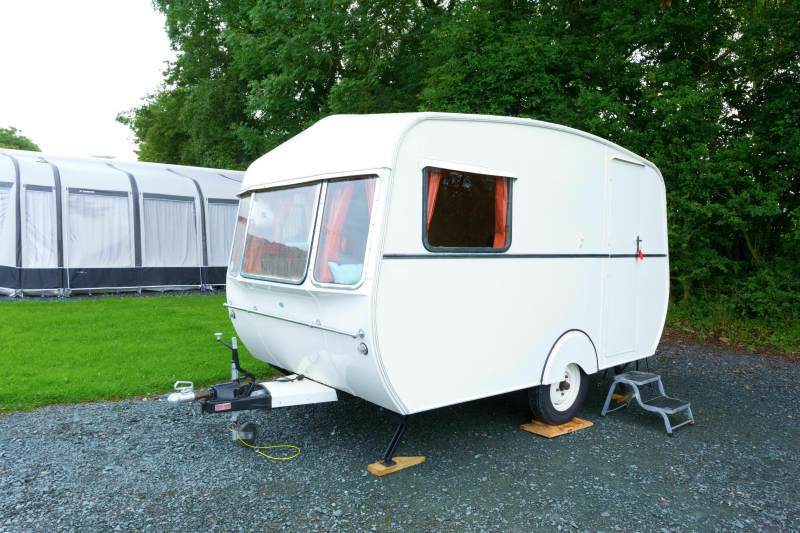 Holgate caravans were known for good build quality; classy examples of their era. One of the models to emerge as the 1960s dawned was a Silver Wren, a diminutive two-berth of a layout that retained its classic status until only a few years ago when two-berths waned from popularity and fixed beds took over.

The Holgate family discovered a Silver Wren by chance, on eBay, requiring restoration. They bought it and sent it to Lucy Jane Vintage Caravans, a specialist restoration company in Sussex. The Silver Wren is now back home with the Holgate family; it’s treasured in a barn at Hollins Farm, one of the company’s three touring sites in Cumbria and north Lancashire.

The Silver Wren was towed out onto a pitch at Hollins Farm for us, alongside the present-day tourers; ours for a day of evaluation, just as we would a new caravan. We even got to hitch it up and tow it around the site, albeit an incongruous sight, a tiny little, caravan behind our big, beefy towcar!

The full-width metal rail and overhanging front window base that distinguished Holgate caravans still look stylish. The roof is boat-shaped (there was a belief that such shapes aided wind resistance). The windows are glass, in steel frames with brass catches. 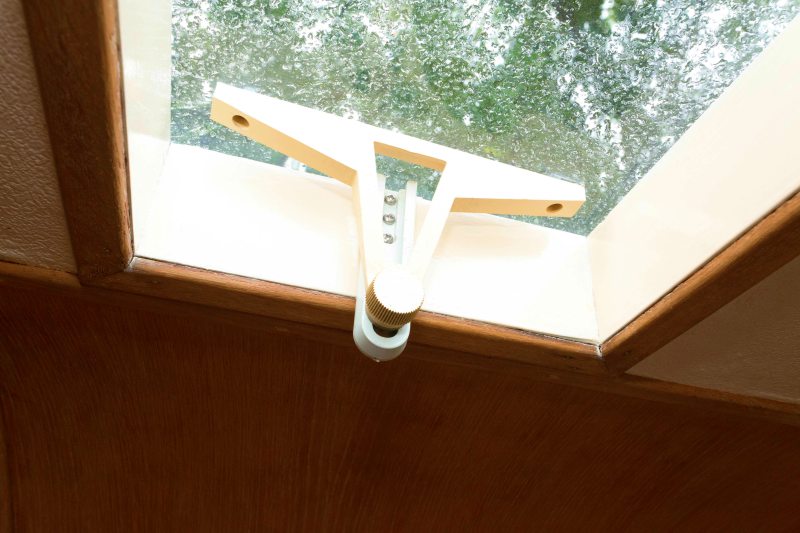 It has two small roof lights. Illumination is provided by gas mantle lights above the front window and in the kitchen. 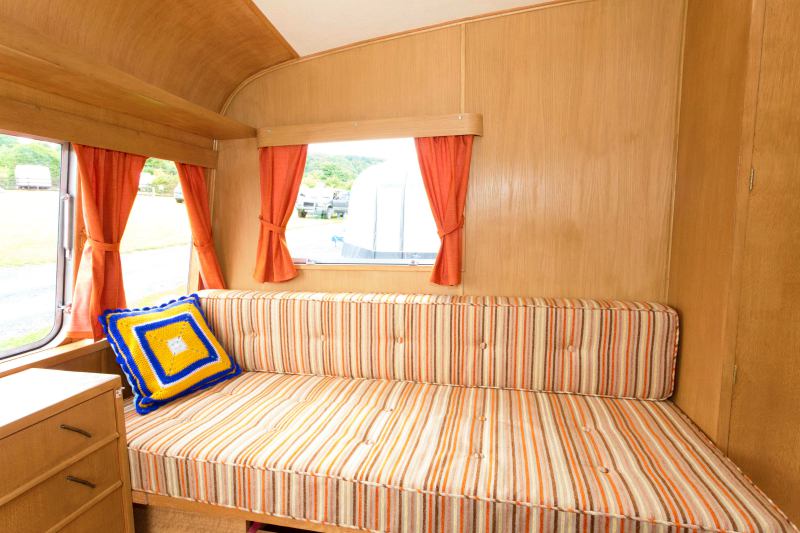 The body is a mere 3.6m long; the overall length is 4.5m. Into that tiny space the Holgate designers packed two settees that made single beds (there was no pull-out base to make a double bed in that era), a wardrobe, a dresser and a rear kitchen with a Calor gas two-burner hob and a grill. Wooden flaps hinge up to reveal a tiny steel sink and drainer. A foot-operated pump drew water from an exterior container to the sink. 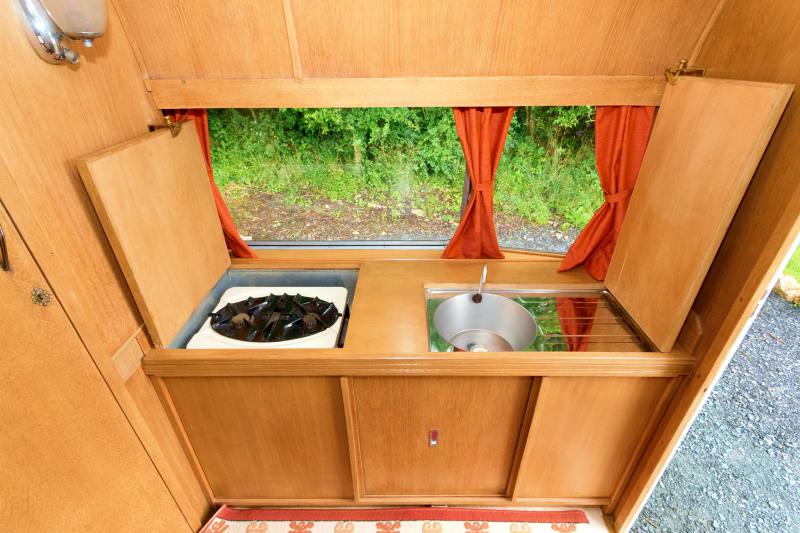 There’s no fridge but there is a glass-fronted cabinet with lace curtains on the inside of the doors. Refined! There’s a toilet compartment but no toilet and no washbasin.

The walls are lined with wood as are the front and rear panels.

The Silver Wren dates from the early 1960s; the Holgate family can’t be precise about its year of manufacture. Records show it cost £850 when new; a mighty sum in the early years of the ‘60s. 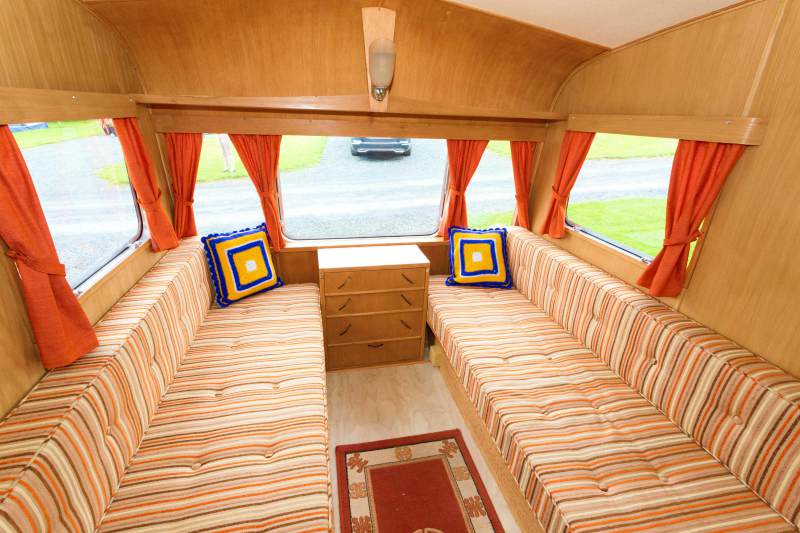 This fine piece of caravan history isn’t the only memento of the Holgate manufacturing era. There’s another Silver Wren in the Hollins Farm Barn, awaiting restoration, again discovered by chance.

The gleaming Silver Wren was restored to celebrate 60 years of Holgate holidays.

In 1956 caravan manufacturer Billy Holgate and his wife, Miriam, acquired a piece of land on Middlebarrow Plain, Silverdale, with 35 pitches and one tap. A wooden building was soon built by the entrance road to house a little shop and a reception office. A couple of toilet buildings followed; basic affairs with cold water to sinks and no lighting. And certainly no showers. (Caravan parks were basic just as caravans were.) By 1960 there were 200 pitches and some roadways. The energetic expansion had started.

Eight years after the park was set up, the family ceased caravan manufacture; the business focus had shifted from making holiday homes to catering for holidaymakers.

Today, the prestige Holgates Caravan Park is one of the best equipped in Britain, with a pool complex, a restaurant and bar, a bowling alley, an amazing soft play area with a sofa for parents, and a shop which was enlarged earlier this year. Everything from a variety of swimwear to quantities of toys is here, plus freshly-baked bread, pastries and locally-produced meat. All three of Holgates’ touring parks, Silverdale, nearby Hollins Farm and Bay View at Bolton-le-Sands, a few miles away, are members of our Premier Parks group.

Holgate’s prestige parks are a far cry from the humble beginnings of 1956. Interestingly, there are couples and families who have caravanned here, close to the northern shores of Morecambe Bay, from the earliest days of the park, through several generations. They’ve watched the park grow – and many will remember the days when Holgate caravans were on pitches here.

Do you remember those early days at Holgates Caravan Park – and Holgate caravans? Perhaps you even owned a Holgate. Share your story with us on Facebook or Twitter!

On the North coast of Cornwall, close to the border with Devon, at Bude, lies Wooda Farm Holiday Park, a multi-facility place with sea views, a restaurant, a new cocktail bar this year, an art studio, a beauty salon, many activities and even a dog shower. Pitches are spacious, many have hedges and their own lawns. 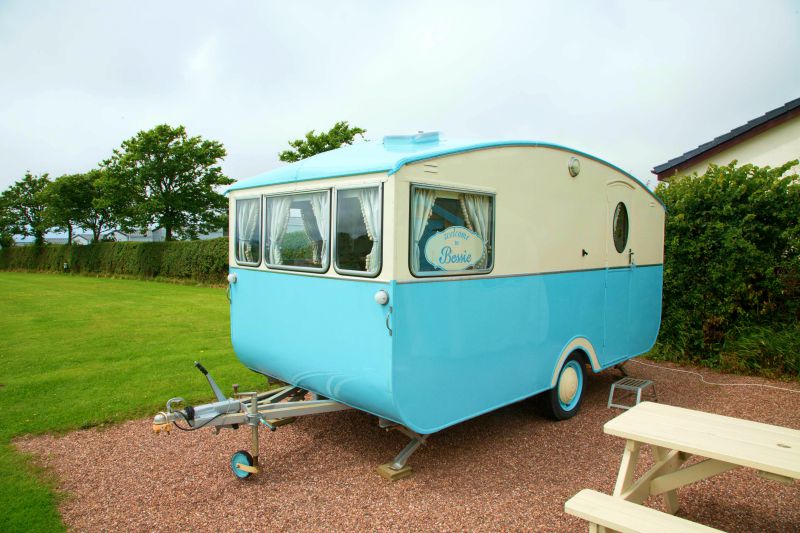 There is one pitch, though, that’s unlike all the rest. It’s occupied by a 1958 Eccles caravan – and the caravan is yours to rent, for short breaks or a week.

And rather like the Holgate at Holgates Caravan Park, this little Eccles has a connection with the beginnings of Wooda Farm as a holiday centre. The Colwill family has owned Wooda Farm for more than 100 years. The person who first established holiday accommodation, in the form of bed and breakfast, at Wooda Farm was Bessie Colwill. And the restored Eccles has been named after her. The restoration marks a milestone at Wooda; this year is the 40th since the caravan park became established. 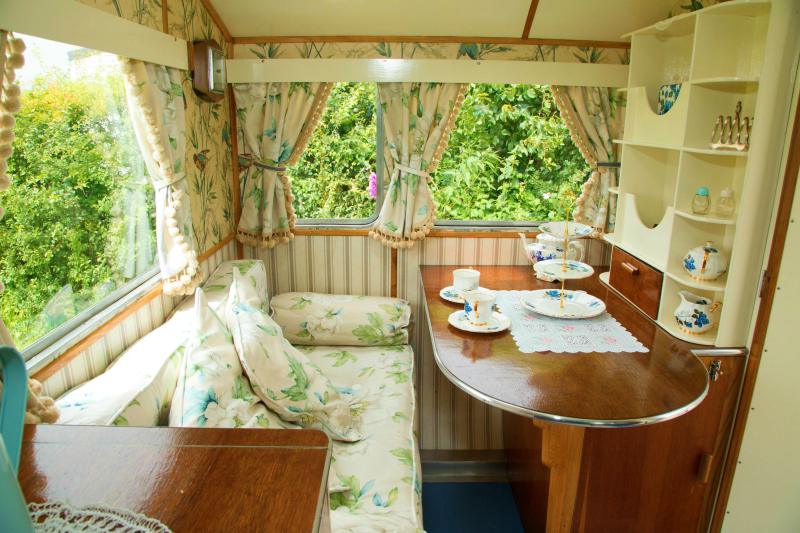 “Bessie” is an Eccles Dominant model, beautifully restored and equipped in vintage style. She’s had a layout alternation from the original; the lounge has been transformed into a permanent double bed, a feature not yet invented when Eccles was designing caravans in the 1950s. 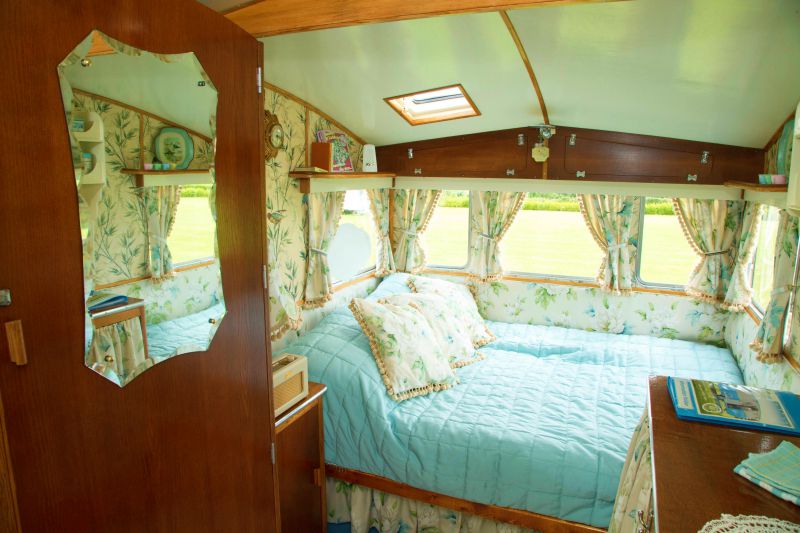 All the woodwork is original. There’s elaborate wallpaper of the era on the walls and the caravan is equipped with lighting, a clock, china and cutlery all in vintage ‘50s style. 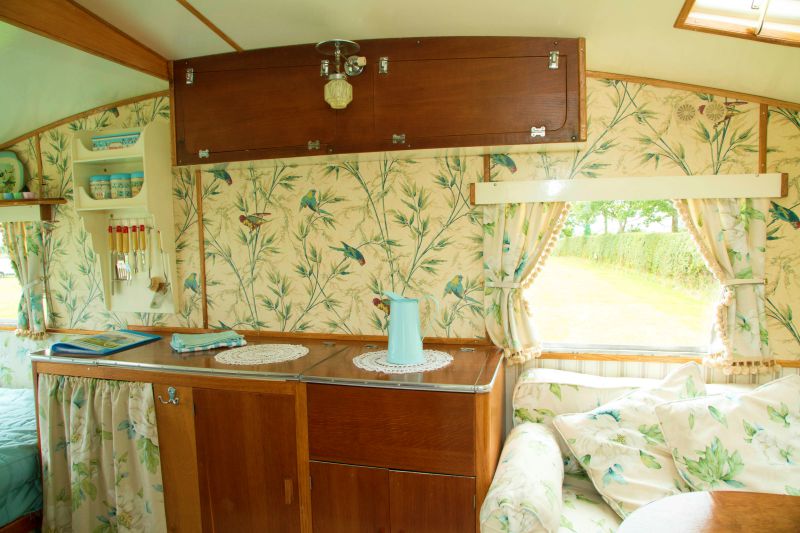 The Eccles was restored by a Cornish couple, Charlotte Colwill, Bessie’s great grand-daughter, tells us: “They were keen to make the holiday experience as authentic as possible by sourcing all original fixtures, fittings and decorations.”

You can experience caravanning 1950s’ style from £200 for a Monday to Friday or Friday to Monday break, or a week from £300.