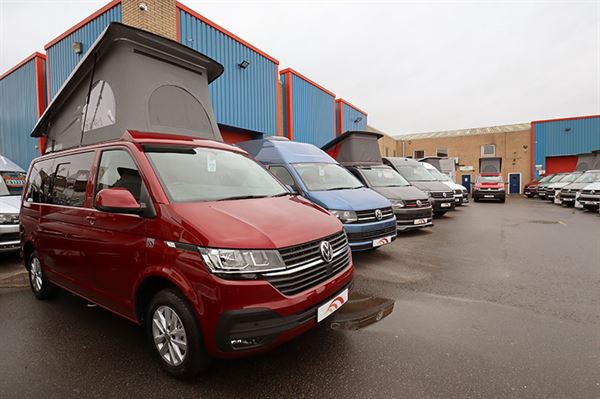 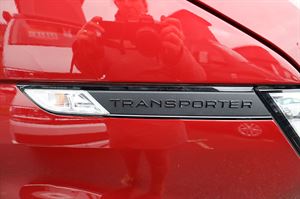 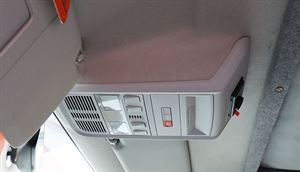 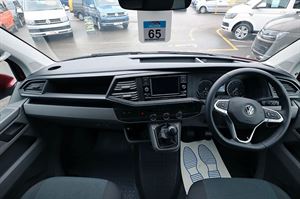 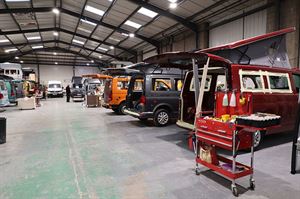 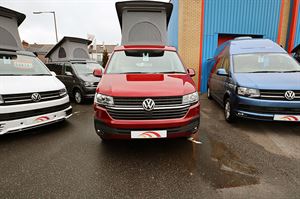 With the exciting launch of the new Volkswagen T6.1 this year (which replaces the T6) we’ve started to see a few examples hit our shores. Derby-based campervan converter, Hillside Leisure, has been one of the first in the country to get its hands on the all-new base vehicle, and so we caught up with brothers and company owners, Adrian and David Cross, to find out more…

The Volkswagen T6.1 base vehicle

Rather like when the Volkswagen T6 superseded the T5 and we struggled to spot the difference from the outside, the same is true of the new T6.1 compared with the T6. The main difference is at the front, however, where there’s a new three-tier plastic grille section below the VW badge, which pushes the bumper further down. With narrower headlights, the result is an altogether more car-like appearance, and the new T6.1 looks more akin to an SUV than its VW Transporter ancestors of old. What you can’t see is the addition of front parking sensors (the T6 only had rear ones) and there’s also the option to swap out the standard halogen headlamps for LED ones.

From the side, the only aesthetic difference is on the wing, where the section between the headlights and side indicators now features a plastic inset Transporter logo, which adds a sporty feel. But it’s what you can’t see that’s changed. The side door features a new sliding mechanism that’s lighter and smoother, and there’s now a child safety lock switch in the cab. The side window has a new opening latch that’s easier to operate, too.

Step around the back and you’ll be forgiven for thinking it’s identical, because it is – during daylight hours, anyway. There’s the choice to opt for LED tail lights, which light up in funky Tetris fashion. In pre-campervan state, the base vehicle features a new brick-like aerial at the front of the roof, too, but this is concealed once a pop-top or high-top roof is added.

Colour wise, Chestnut Brown and Acapulco Blue have been dropped while Bayleaf Green, Fortanna Red, Ravenna Blue, Ascot Grey and Copper Bronze are new additions. Under the bonnet, the new 6D engines obviously comply to the latest emissions standards. The 84PS and 102PS engines have been upgraded to 90PS and 110PS respectively, while the 204PS is now 199PS. The 150PS is the only unit to persist, in both manual and DSG forms.

In the cab, you’ll notice a number of differences as there’s a completely new dash. The centre section is angled towards the driver, so it’s easier to see the central 6.5in touchscreen display. Apart from the usual DAB radio and optional sat-nav, this now features Volkswagen’s wireless app connect which comes with a one-year free subscription. Since the T6.1 (Highline spec) features front and rear parking sensors, this information is also automatically displayed on the screen, changing from amber to red and beeping with increased urgency as you come nearer to flattening a bush, for example.

Further updates include air-con and a 12V socket in the glove box, an extra cup holder next to the gear stick and a wider cubby on the top of the dash. USB ports have been updated to USB-C ones, and climate control has been increased from four speeds and three directions to six speeds and five directions. Cab air-con is now standard in both Startline and Highline spec, too. Look up and you’ll notice a new control panel where you’ll find LED lights, and a switch for the new LED light at the back of the van, as well as an SOS button in case you need an ambulance. Behind the wheel, you’ll notice this has changed, too, as it features a flat bottom like those in VW’s cars. On the road, the new electromechanical power steering a super-light at low speeds and reassuringly firm at higher speeds. Additionally, you now get adaptive cruise control (cruise control only on Startline), side wind assist, and the choice to turn off traction control.

Hillside has its factory premises in Derby, from where it also sells directly to the public. Pop along on any weekday and you’ll be able to see how the magic happens, Willy Wonka style, as base vehicles disappear into one end of the factory and emerge out of the other as fully-fledged campervans!

The company in renowned for its VW conversions and is one of a handful of Volkswagen-approved converters in the country. Its campers also have European Community Whole Vehicle Type Approval and are NCC (National Caravan Council) approved, too. Hillside currently builds on the VW T6.1 and Crafter, and offers a comprehensive range of campervans, which are all named after pretty villages in the Peak District – Birchover, Cromford, Hopton and Heatherton.

The Birchover is its most popular camper, being based on the T6.1 and with a tried-and- tested side kitchen layout. It’s available in a range of specification levels to suit all budgets, and prices start from £39,995 for a Birchover S, which is based on a Startline with a 90PS engine. The Birchover Classic starts at £49,495, and £51,995 for the range-topping Birchover Executive, which both come in Highline specification with a 110PS engine.

Whichever Birchover you choose, you can expect the base vehicle to come with a good level of specification as standard, while the campervan conversion features a RIB rear seat/bed with two three-point seatbelts, swivel cab seats, an integrated hob and sink unit, underslung water tanks, a compressor fridge and the choice of a pop-top or high top roof. Additional features that are optional on the S but come as standard on the Classic or Executive include Eberspächer diesel blown-air heating, pumped hot and cold water, external shower point, and a Dometic portable toilet.

The Cromford, meanwhile, is based on the long-wheelbase T6.1 and features a rear washroom, central kitchen and two single RIB travel seats ahead of this, which convert to two single beds, using the swivelled cab seats, come night time (or can be pushed together to form a double.) As a result of this layout, the Cromford also has a rear-rising roof.

For 2020, the Cromford has been redesigned, resulting in a more user-friendly layout. Previously, the cooker (oven/grill with hob above) and sink were opposite each other, but these have now been combined into one unit, which frees up workspace where the sink used to be. The fridge has also been moved from floor level to waist height, which is more accessible, and has created extra space for cupboards. The washroom has also been modified, as the bi-fold door has been changed to a sliding one, and a small washbasin has been added to the very back of the ’van, so it can also be used from outside. The Cromford is priced from £45,495.

The Hopton and Heatherton are Hillside’s VW Crafter offerings, and these remain unchanged for the 2020 season, as does the base vehicle itself. These Crafter-based campers are ideal for anyone needing more space, and the Hopton boasts an ever-popular rear lounge as well as a central kitchen and washroom. Meanwhile, the Heatherton features a huge rear washroom, a central kitchen and a two-seater travel bench that converts to a double bed. Prices start from £54,495 for the Hopton and £59.995 for the Heatherton.

If you’re heading to the Caravan, Camping & Motorhome Show at the Birmingham NEC on 18-23 February, you can see the full Hillside range at stand 12.150, where you can drool over its latest T6.1 conversions and grab some bargain-basement deals on the last of its T6 campers. Keep your eyes peeled for a retro petrol station…

The latest incarnation of the compact Volkswagen Caddy has been revealed 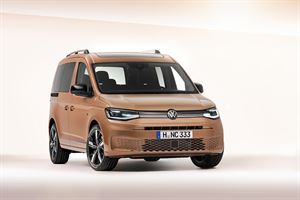 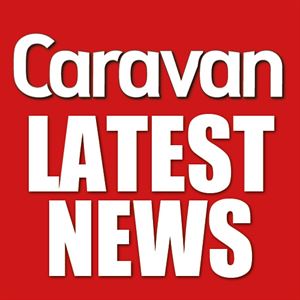 The Hull and East Riding of Yorkshire Caravan Manufacturers’ Association (HERCMA) has cancelled both its ... 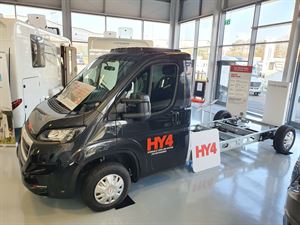 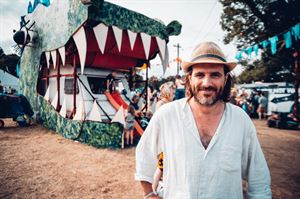 After a riotous debut in 2019, Latitude Festival’s Art Caravan competition returns for 2020. ...

Caravan and Motorhome Club launches Big Little Tent Festival and Big Little TeaTime Festival to keep the little ones (and big ones!) entertained! ... 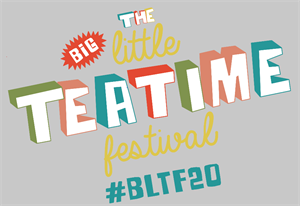 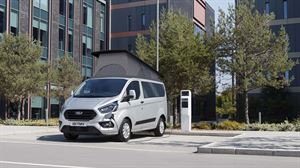 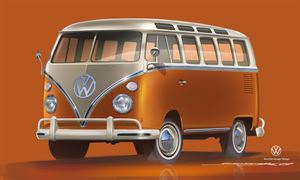 Volkswagen has created an all-electric version of its classis splitscreen campervan, due to be revealed this ... 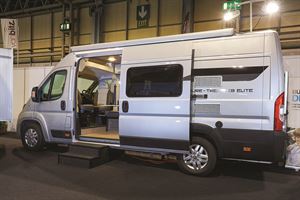 The results of the twenty-first Caravan and Motorhome Club’s Motorhome and Campervan Design Awards have been ...