Top 11 things to do on a motorhome tour of Norfolk 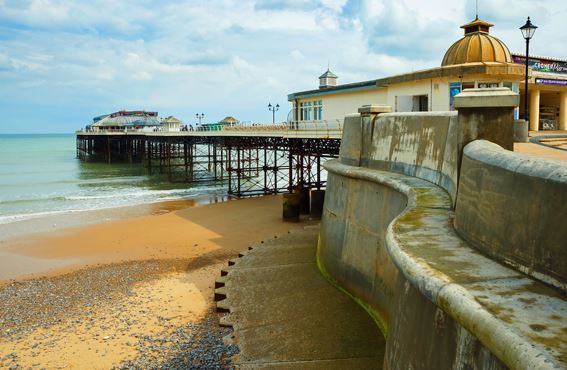 Whether you're a fan of the classic BBC TV comedy Dad's Army, a stately home hunter, a big kid at heart or a lover of nature, Norfolk is the perfect destination for a varied motorhome or campervan tour.

When you think of Norfolk, think Blue Flag beaches and ‘big sky country’, charming coastal towns, great museums and grand estates of fine architecture. The county has about 45 miles of tremendous coastline but, as this coast suffers from erosion, the beaches are ribbed with different types of defences – from rocks and groynes to concrete walls – in the never-ending battle with the tide.

Of course, you certainly can’t get much grander than the Sandringham Estate, the country retreat of Her Majesty Queen Elizabeth II.

On a recent visit, we toured the north Norfolk coast, spending four nights on campsites and three nights wild camping. Read on to find out our highlights... 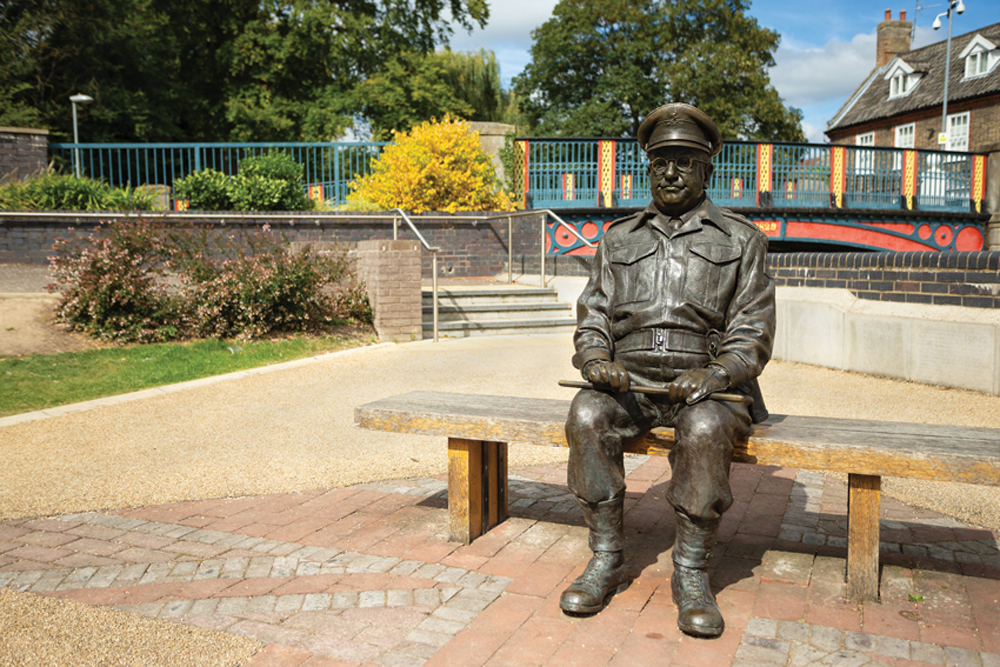 Much of the iconic BBC comedy series Dad’s Army was filmed in Thetford, which was the real-life version of the show's fictional town Walmington-on-Sea. The coastal scenes were filmed in various other places, including Brighton, Lowestoft and Great Yarmouth as Thetford is miles from the sea.

In the Dad’s Army Museum at Thetford you can pose for pictures in Captain Mainwaring’s (and the vicar’s) ‘office’ and have a slice of homemade wartime-recipe cake (a bit dry, but nice) in The Marigold Tea Rooms. The museum displays a wealth of memorabilia. There are uniforms, information about the cast members, scripts and images.

Our dog, Murphy, was welcome (except in the café). When the receptionist bent down to stroke him and said, “What’s your name?” I replied, “Don’t tell him, Murphy!” “Ah, Murphy”, he laughed. For non-aficionados, this is a reference to a very famous line in the BBC TV comedy series involving a U-boat captain and Private Pike.

We could have spent ages in this museum, but wanted to see more of the themed exhibits around the town, including a bronze statue of Captain Mainwaring, Walmington-on-Sea’s town hall (the Guildhall), Eastgate Cinema (bingo hall) and Corporal/Mr Jones’s butcher’s van.

Note that Tuesdays and Saturdays are market days in Thetford and the stalls obscure the Guildhall. Guided tours (charge) of the Dad’s Army Museum exhibits or coach tours of some out-of-town filming locations are available, but you need to book in advance 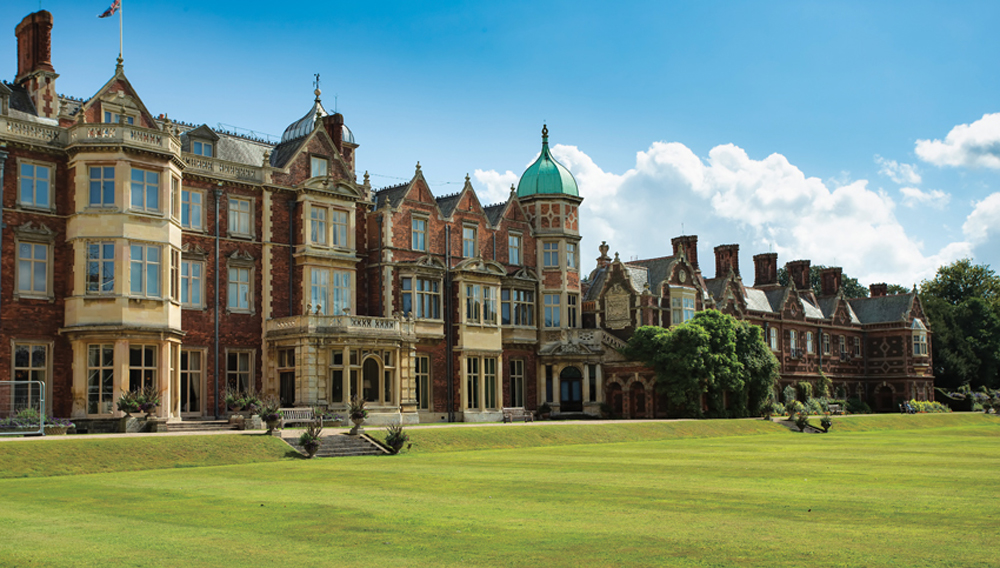 It’s 1½ miles to Sandringham House from the Camping and Caravanning Club site nearby. The house was bought for Edward VII in 1862 along with 7,000 acres of land (now extended to 20,000 acres.) With immaculate lawns, the house looked magnificent in the September sunshine, despite a third of it being covered by scaffolding.

I was mesmerised by the beauty of the objects on show, particularly the tapestries. Although we were only able to see four rooms, the museum seemed to have more exhibits than the house itself, including fire engines and gifts from other countries.

There's a miniature electric version of the Aston Martin DB5 with 007 number plates (from the Goldfinger and Thunderball films) that was given to Prince Andrew!

Dogs are not allowed within the formal gardens or the house, but Murphy enjoyed himself running around in the surrounding country park. We also saw a life-sized statue of Estimate, one of the Queen’s favourite race horses, standing proudly outside Sandringham House (Estimate won the Gold Cup on Ladies’ Day at Ascot in 2013). 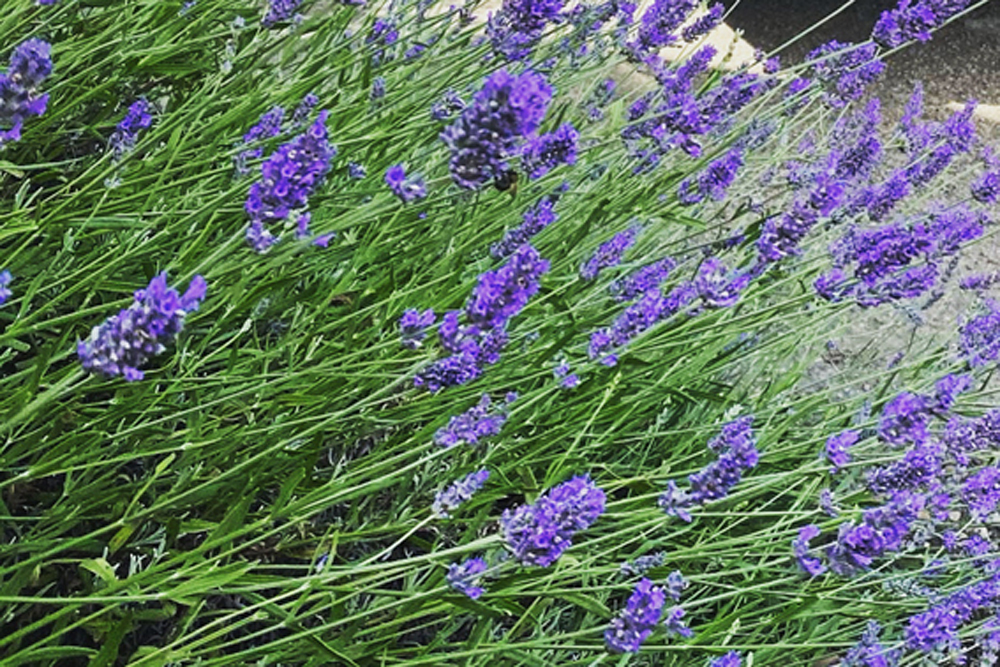 Norfolk Lavender is at Heacham, seven miles from the campsite; the flowers were out of season, but the lavender products in the shop smelled wonderful. This scent is supposed to help you to relax and get a good night’s sleep. It seemed to work for us.

On the main A149 road just three miles south of Hunstanton
norfolk-lavender.co.uk 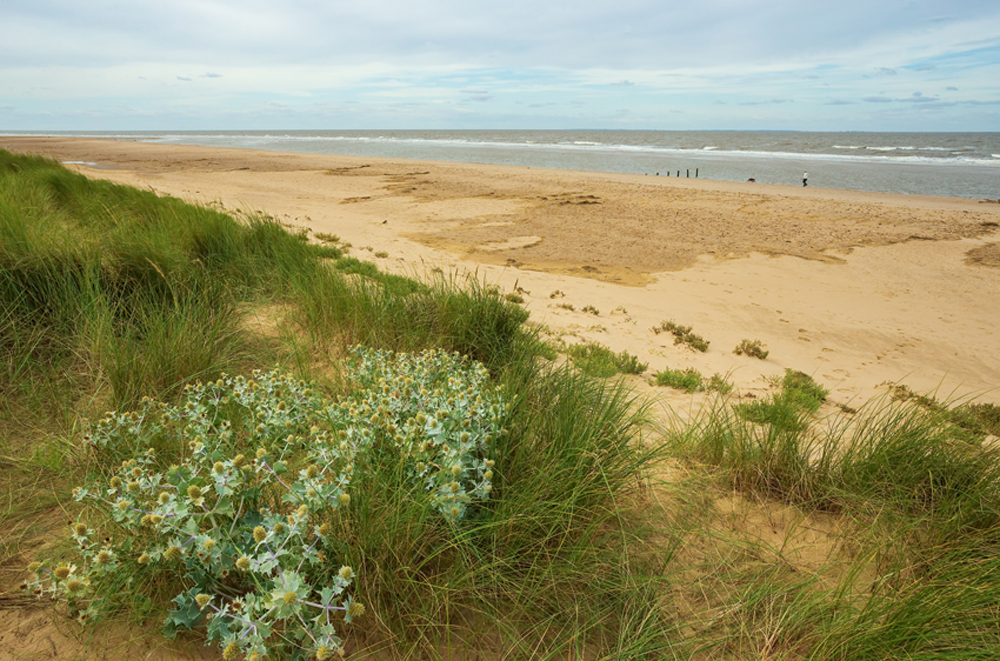 A Norfolk Wildlife Trust site on the coast just north of Hunstanton is perfect for an afternoon jaunt. While my wife, Bridget, and Murphy enjoyed themselves on the beach and in the water, respectively, I enjoyed myself photographing a juvenile little ringed plover and other waders, including avocets, on the marsh.

From Hunstanton head north along the A149 Coast Road for 4km (2.5 miles), where you will then take a left turn and drive down Beach Road. The reserve is signposted. Please park in the NWT car park on the left- hand side of the track. Entrance to the nature reserve and start of the trails are beside the visitor centre. A number of hides overlook the pools and grazing marshes. There is a charge for non-NWT members.

The Lynx Coastliner bus stops on the main road 3km (1.9 miles) away 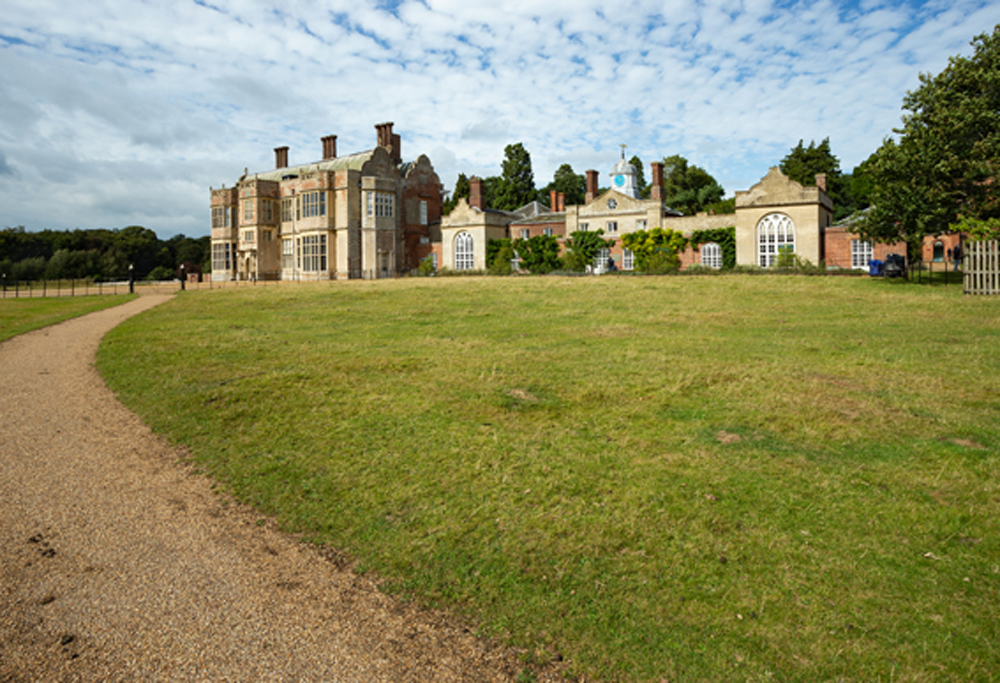 The superb Felbrigg Hall (National Trust) is set within a 520-acre park with woods and waymarked trails. Some of the hall’s rooms are quite dark to protect the paintings. The Cabinet Room has a lot of particularly stunning Italian paintings, which were acquired by William Windham II during his grand tour of Europe in the 18th century. 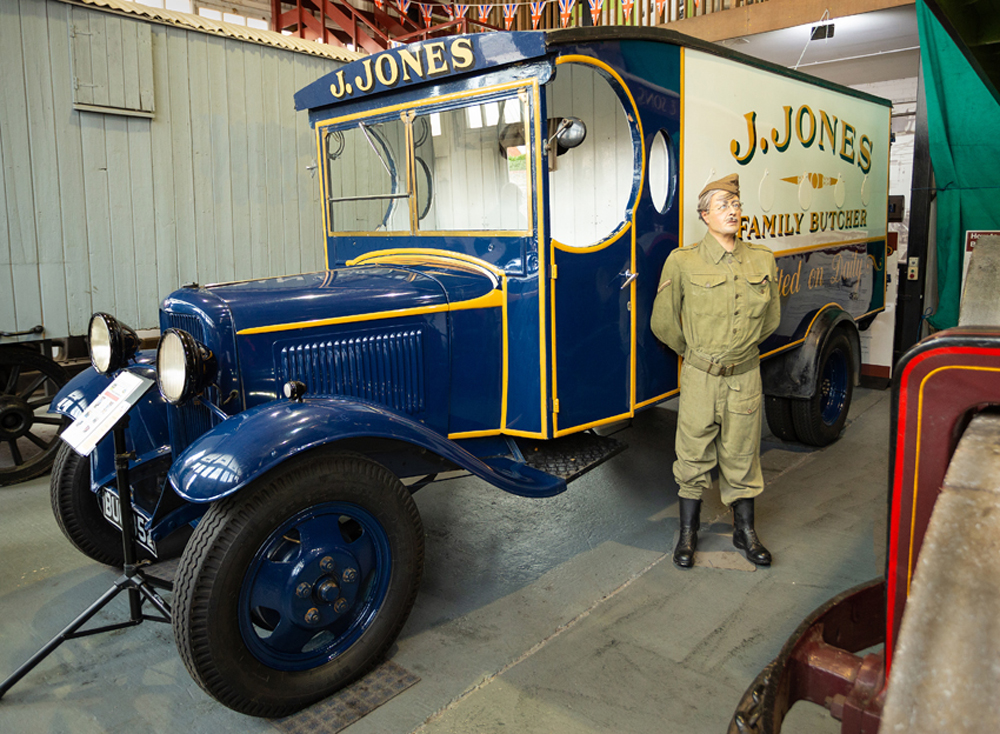 This old airfield has a dome-shaped building that used to house a simulator used by the RAF to practise shooting down planes during WWII. Information boards tell some of the history of the airfield and its use during WWII and the Cold War. One board had a button; one press resulted in the sounds of a Wellington bomber. When pressed twice the sound was of a Browning anti-aircraft gun. It makes the hairs on the back of your neck stand up!

Langham was opened in 1940, closed in 1958 and then sold to Bernard Matthews (of turkey fame) in 1961. One astonishing fact was that, in the last three years of the war, an airfield was built in this country every three days.

Between the North Norfolk villages of Langham and Cockthorpe. It is two miles inland from the A149 coast road at Stiffkey and five miles from Sharrington on the A148. If using sat-nav, please use the postcode NR25 7BP
langhamdome.org

The Shell Museum in Glandford is very interesting, with shells of fantastic shapes and every colour imaginable. This collection from around the world was made over a period of 60 years by (the late) Sir Alfred Jodrell of nearby Bayfield Hall. The early twentieth century building it’s sited in, next to the church of St Martin, is really impressive with its Dutch gable ends. Across the road, in the Birdscapes Gallery, we were tempted by an exhibition of wildlife paintings and sculptures. 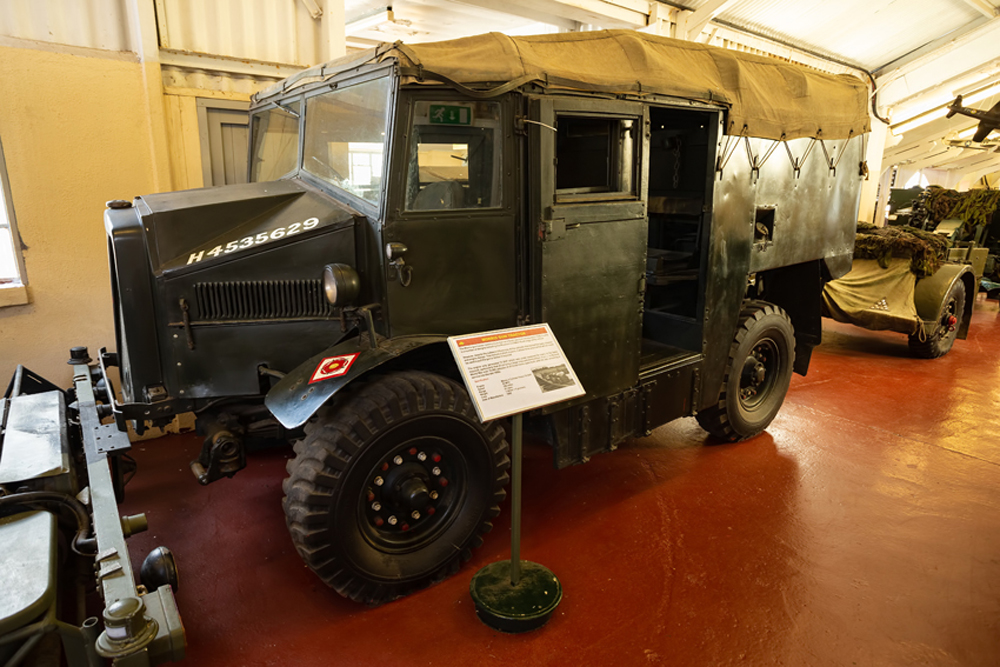 The Muckleburgh Military Collection is on the former Royal Artillery Anti-Aircraft training camp at Weybourne. Historic objects – uniforms, guns, tanks and other vehicles – make up this huge display, gathered over 30 years from all over the world. You can even ride around the camp in one of the tanks. 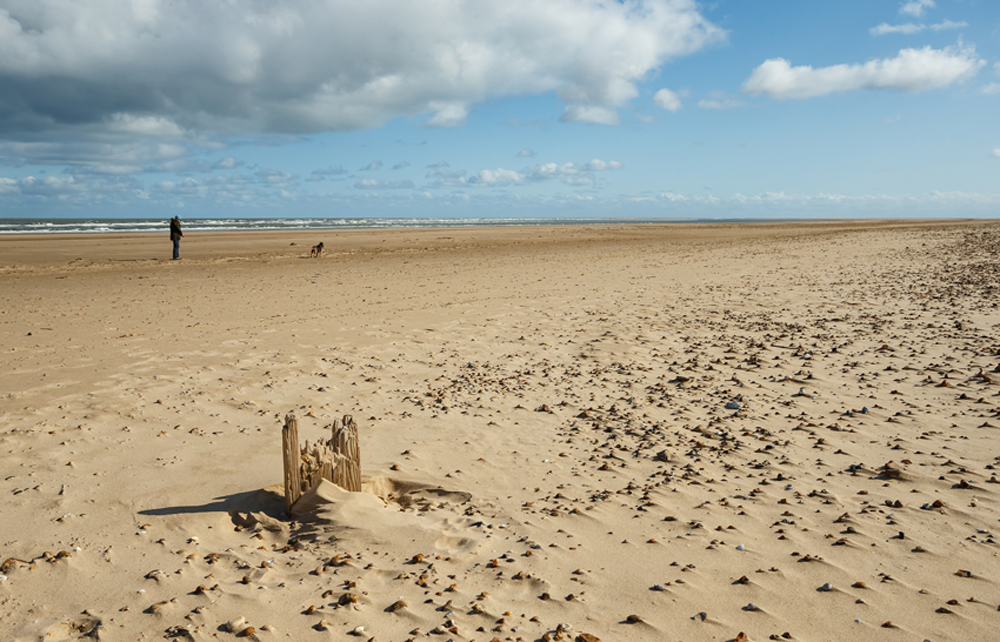 A truly breathtaking sight, where big sea meets big sky. This is a special place. When the tide is out, it's about a half-mile walk to reach the sea. If you get there early few people are around, some riding horses and others walking dogs but, due to its size, it can feel like you have the beach – one of the most unspoilt stretches of sand in the country – to yourself.

Access is via Lady Anne’s Drive in Holkham village, just off the A149, opposite The Victoria Inn
holkham.co.uk 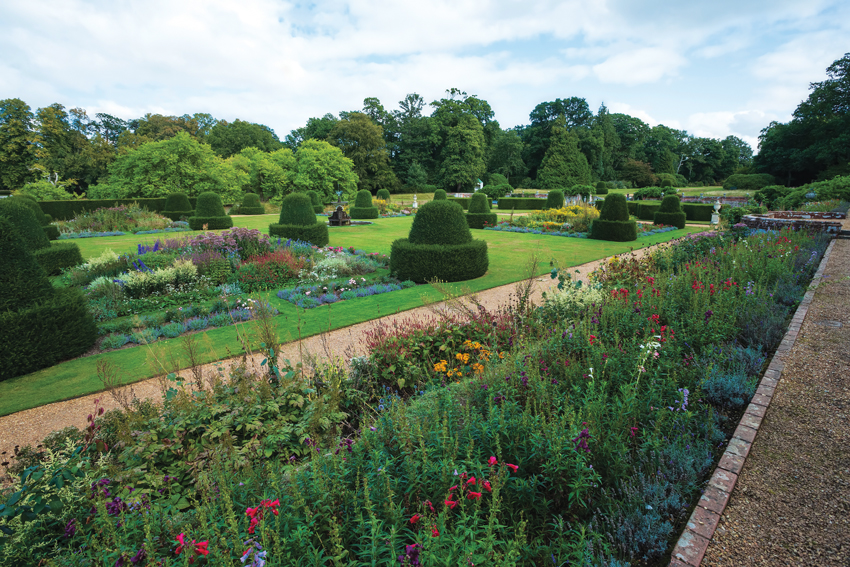 Another National Trust property, further inland with 4,600 acres of parkland. There is so much to take in: a house with many interesting rooms, a walled kitchen garden with vegetables aplenty, an art gallery and a really big secondhand bookshop. The RAF Oulton Museum – which told about life on the estate during WWII – is also above the shop.

Blickling Estate, Aylsham NR11 6NF
Please note: you will need to book your parking in advance of your visit.
nationaltrust.org.uk/blickling-estate 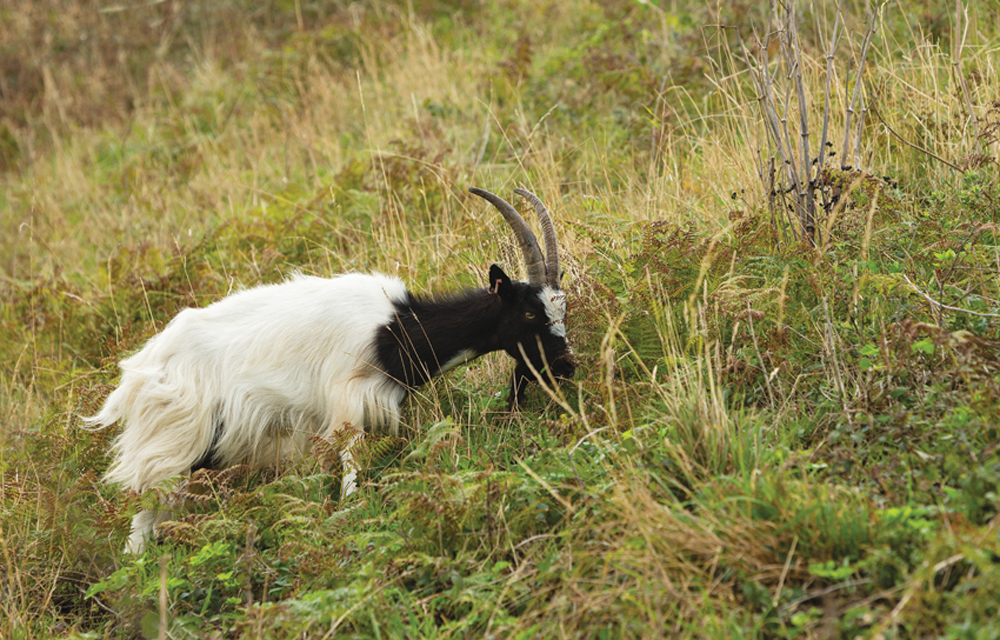 To visit Cromer you can park on Runton Road next to the Blue Sky Café in the clifftop car park, with views out to sea (this car park can take any size of motorhome). Walked down towards the town, there is a shelter with designs on all four corners, some of them painted by television presenter, Julia Bradbury.

Further on you should walk through beautifully tended gardens; take the time to sit and soak up the atmosphere and the fragrance of the seasonal blooms. On the other side of the path are the cliffs and this is where you might spot a bagot. No, not a boggart, the shape-shifter of Harry Potter fame, but a bagot goat, which graze the steep slopes every summer to help stop erosion and to clear vegetation. These animals are an unusual, yet pleasing, sight.

The lifeboat museum is at the end of Cromer’s pier, where you can chat to some of the RNLI (Royal National Lifeboat Institution) crew, see the equipment they use and the plaques detailing their rescues, getting a clear reminder us of just how dangerous the sea is and how heroic these rescuers are.

Although the museum is free to enter you can give a donation. You never know if you’ll need the services of the RNLI.

Wild camping spot in layby on A148 between Sharrington Strawberries and Back to the Garden farm shop, southwest of Letheringsett. It was a bit noisy at times!

For more campsites in Norfolk, head to Campsite Finder.

About the author: Robin Stanbridge loves combining wildlife photography with holidays in the motorhome with his wife, Bridget, and partly-paralysed dog, Murphy